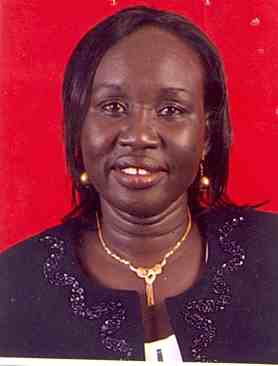 Dec 31, 2014(Nyamilepedia) — The famous woman whose popularity faded away like morning dew or water evaporated from the lake Victoria has just lost it as the matter of second and would never refurbish it ever again. Rachel Nyadak who hails from Uror County that she deems to destroy soon and will remain a day dream is a true daughter of Lou Nuer community coming from trio-Daak Yien section of Lou Nuer clan. Her noble birth from Mai-kir Jaak is not disputable and no question about that.

However, nature is a powerful phenomenon that influences all living things and has made Rachel Nyadak to be a different human from the community where she originated. The Lou Nuer people are cool and dignify people who live in their truth and defy anything related to shame and taboo. Their daughters whether young or old do not embrace the culture of greed, crimes and prostitution, Rachel Nyadak is very peculiar among thousands of her mothers, sisters and daughters in the Lou Nuer Community.

The recent statement that you ( Rachel Nyadak) posted on your Face book Timeline in favor of your recent adopted bridegroom ( Dinka) to come and destroy Uror County the heart of “Mun Loal,” has outraged many Nuer sons and daughters and tainted the feelings of Lou Nuer community in particular. You could not blame us my sister if we are exposing your wicked characters which we concealed for the century. It is your unrelenting lust and rampant greed which brought and will still bring shame on you.

Please prepare for the worst now and on wards. We are going to resist you Mrs. Traitor and you are the living Ghost in Juba.

Rachel Nyadak Paul a widow with multi-husbands. If you ask who her real husband is, it may be tough for her to tell you the exact name of her former and the current husband. She could be like Samaritan woman who was in dilemma to tell Jesus at the Well who her real husband was among the seven she enjoyed the sex with them ( John 4). Rachel Nyadak could be the first who came at the last after the wife of seven men, she is in the circle of hundreds. Nyadak believes in the power of die or live intercourse as the mean to earn living. All of us including Nyadak and Sirir hail from Uror County, but we will expose her wicked deeds because she has made us lost our patience which we held for the century.

Rachel Nyadak was initially brought up by the Lou Nuer priests in the Presbyterian Church of Sudan in Nairobi during the liberation time. The church priests found her in a dirty business brewing and distilling the local alcohol call “arake” as the mean of earning the incomes for the survival of her kids. She was also used as maid and satisfied the lusts of some male masters who did not fear God. The church priests lifted her from those dirty jobs and sent her to language school in Nairobi and learned through adult education session. Now she is able to speak fragile English with poor pronunciation.

The Church priests sympathized for the best things which were done to the community by her late father Paul. The Nuer famous proverb states that, stomach have a lot of corners. That proverb becomes true with the case of my sister Rachel Nyadak. If she accepts to live in her father’s legacy, she can be one of the best women in the Lou Nuer Community today.

Though Rachel Nyadak later turned against their households and snatched some of them away from their beloved wives through her sweet and private matter between the legs, some of the priests did not relinquish their commitments to bring Rachel to the stage that she is now enjoying to destroy the very people who brought her up to the then level.

After the Lou Nuer Presbyterian priests done their part and brought her to the surface of the public realm that enabled her to be seen by many people as human being and cable widow who could be supported through her potential, the Uror Community uplifted Rachel higher and nominated her to represent them in Jonglei State Legislative Assembly. Nonetheless, Hon. Rachel used the public position to sell herself to the powerful personnel in the state and climb the ladder farther. Through her sweet relation with Comrade Mayian Angor who produced her the 14th child, she was able to secure the position of Ministerial post and did not do anything for the people of Uror County and Lou Nuer at large.

In contrary, Hon. Rachel Nyadak turned against her community using the potential she obtained through the efforts of the Nuer community against the Nuer people. The same people who shaped her future become the today preys of her wicked actions.

Finally Rachel Nyadak is a dead horse that just awaiting her fate. Her days are numbered. The dirty money she gets through the blood of her people who shaped her life from nothing to something will remain in vain sooner than later. “Rachel Nyadak Paul is a living Ghost in Juba.”

Wiyual Ding Lual the author of this article hails from Uror County in Jonglei State. He can be reached through electronic mean as: wiyualdieng@yahoo.com

4 comments for “Rachel Nyadak Paul is a Living Ghost in Juba!!!”