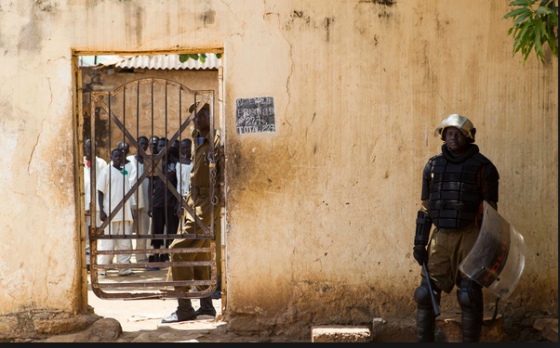 A view of Torit prison, built in 1946 and the oldest one in South Sudan. (Photo: Martine Perret/Nyamilepedia)

Jan 28, 2014(Nyamilepedia) — The Ma’di community in United States would like to inform the International Communities that we are deeply concern about by the arbitrary arrest of our youth and community leaders in Ma’diLand, which started since Jan 11, 2015.

On Sunday Jan 25, 2015, widespread arrest were conducted by Juba Government. Among the arrest were Lopirigo/Deputy Chairman of Ma’di community in Ma’diLand; Jabakan Lagu, Pasquale Injii aka (Iwa) and Festo kicere the two and other youth were detained in Kerepi while Jabakan is detained in Nimule Military barrack.

According to the report on the ground the Lopirigo was badly beaten by armed security tortured and relatives are not allowed to visit.

The security forces sent intimidating message to family members that anyone who attempt to visit Jabakana and the youth will be arrested. The arbitrary arrest of its Ma’di youth by the government security forces continue indiscriminately without any justification.

We, the Ma’di Community in the United States of America, are deeply concern and condemn the indiscriminate arrest of our youth, and our community leaders.

Mr. Jabakana was also a victim of government conducted arrest in Sept 2013, in which he was tortured to an extend that he became paralyzed in both arms. There is a real risk that Jabakana will not survive the torture and ill-treatment while in detention this time.

We, the Ma’di community in diaspora, particularly in USA, appeal to the international community and the government for urgent action and a release of Jabakana Lagu and the detained youth in various military barrack in Ma’di Land.

We urge government to follow the rules of law, the constitution that governs the nation as stipulated in Section 51 of the Bill, an Article 19 (2) that clearly states: “a person arrested by the police as part of an investigation, may be held in detention, for a period not exceeding 24 hours and if not released on bond to be produced in a court of law”

“Any person arrested or detained shall be informed about the charge or charges against him or her within 24 hours”.

The puzzle that remains in question is all those arrested are civilians, why would they be arrested by military men? Among the arrest are two youth, having hearing-impaired sickness, why are they arrested?

This is a clear indication of genocide to Ma’di community in retaliation that community condemning the government for Land grabbing issues where Salva Kirr and Vice president Wani Igga were implicated.

Few month before the killing of a Ma’di Chief, George Livio Ajugo who was murdered in September 2013, Salva Kirr ordered him to give him hundreds acres of land in Ma’di Land, however, the result didn’t go in favor of Salva, and it resulted to the death of the chief.

The same scenarios applied to Kisire and Anthony Gwanya, both were awarded dubious government contracts , which has cost them their lives.

The arrest of Jabakana and the youth has no connection with the death of the two business men and there is no apparent reason for their arrest, because Jabankana is a brother in- law of Kisire and by all means is not involved in the killing of his brother in law. Beside all the youth that were arrested live 30 miles away from the scene.

Therefore we request international community to interfere and inquire this matter to ensure that Mr Jabakana and detained youth are released unconditionally and all these ill and indiscriminate treatments stopped.