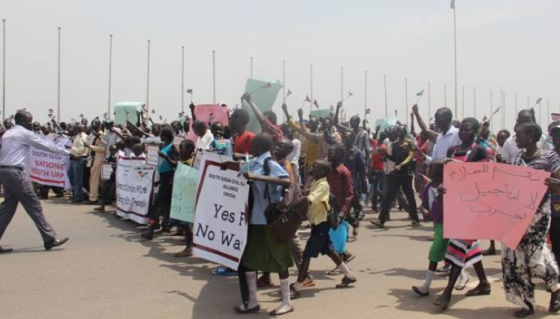 South Sudanese demonstrate in Juba against threats of sanctions and armed embargo on the warring parties. While the SPLM-Juba opposes sanctions, SPLM-IO encourages(Photo: via Radio Tamazuj)

March 5, 2015(Nyamilepedia) — Hundreds of South Sudanese, loyal to Salva Kiir-led SPLM-Juba faction, walked to the dusty streets of Juba this evening as the dateline passes to protest the United Nations Security Council endorsed sanctions, assets freeze and possible punitive actions that are likely to be pegged on individuals who obstruct the peace process, national healing and reconciliation.

While some protestors, carrying mixed signs and slogans, chant against “kawaajat [white man] sanctions”, others rebel rebels’ demand of amalgamating the armies from the main warring parties, the SPLA-IO and SPLA-Juba, to form a solid national army after 30 months.

The United Nations Security Council Resolution 2206(2015) demands progressive withdrawal of all foreign mercenaries from South Sudan, a position that has been mostly ignored by the international community for the past 15 months.

“Demands that the parties respect all aspects of the Coil Agreements and immediately implement the necessary modalities in accordance with the 9 May 2014 Agreement and other relevant Agreements, including the progressive withdrawal of foreign forces deployed in South Sudan since 15 December 2013″ Part of the Resolution reads.

The UN Security Council has also echoed another major demand of SPLM-IO’s. In the resolution, the UNSC urges the AU Commission of Inquiry to release its report to expedite the peace process, accountability, reconciliation and healing, a call that Salva Kiir regime has bitterly opposed in the recent past.

“Stressing the importance of accountability, reconciliation, and healing as prominent elements of a transitional agenda while taking note of the important role international investigations, and where appropriate, prosecutions can play with respect to holding those responsible for war crimes and crimes against humanity,” The UNSC emphasizes

“Taking note of the AU PSC Communiqués dated 5 December 20t4 and 29 January 2015 which, inter alia, stressed that sanctions will be imposed against all Parties that continue to obstruct the political process and undermine the Cessation of Hostilities Agreement of 23 January 2014,”  The resolution reads.

Major resolutions and reports that have been cited by the United Nation Security Council in their resolution 2206(2015), mostly from Human Right Watch, UNMISS and other independent sources, attribute most violations, obstructions, crimes and crimes against humanity to the government.

The UNSC, TROIKA, Norway, USA, and EU have independently and collectively threatened to imposed sanctions, travel ban and freeze assets of South Sudanese politicians on both sides of the conflict if the two main principals failed to reach an agreement as agreed on 1st February 2015.

“Decides that, for an initial period of one year from the date of adoption of this resolution, all Member States shall freeze without delay all funds, other financial assets and economic resources which are on their territories, which are owned or controlled, directly or indirectly, by any individuals or entities that may be designated by the Committee, or by any individuals or entities acting on their behalf or at their direction, or by entities owned or controlled by them, and decides further that all Member States shall for this initial period ensure that neither these nor any other funds, financial assets or economic resources are made available, directly or indirectly for such persons’ benefit, by their nationals or by persons within their territory” Reads part of the UNSC resolution extended to Nyamilepedia.

Despite the threats from New York, South Sudanese leaders in Sheraton Hotel, Addis Ababa, have failed to make compromises for the last three days.

Salva Kiir, who was initially late to the talks, has reportedly observed silence for the past two days as Dr. Machar make proposals that have been turned down by Salva Kiir’s delegation comprising of negotiator Nhial Deng Nhial and Michael Makuei Lueth.

“To what I know; unless the unknown happened today as a gift of God. To my understanding as per the meeting which we were with President Kiir up 8pm yesterday; there is no hope and there is nothing good in this meeting” Said the lead negotiator of SPLM-IO, Dr. Dhieu Mathok Diing.

“This meeting took us now three days while talking. All topics that were being discussed became difficult as time goes in reaching a solution especially between me and Nhial. After that; we invited the two leaders and we handed them our burden and the difficulties that we were facing.” Dr. Dhieu Mathok explains to SBS radio from Addis Ababa.

“Now; everything became even harder because both sides disagree in everything. Government officials are not getting us or they might have understood our position but ignored it. We have no agreement almost on all topics from Status of Forces, Federalism, Transitional Security, Wealth Sharing, Debts, Permanent Constitution, National Assembly and Council of States and Justice for the war’s victims.” Dr. Dhieu continued.

According to Puot Kang on SPLM-IO delegation, the Opposition initiated topics for discussion, however, the government delegation rejected the ideas without explanation.

The silence approach adopted by the GRSS, however, did not only worry the IGAD mediators in Addis Ababa but also the loyalists in South Sudan’s capital, Juba.

“We don’t want two separate armies; we have determined our rights as country and no one [can] impose the system of two armies.” Said Manasseh Magok Rundial, who speaks for South Sudan parliament.

Magok wants the International Community and the United Nations to be aware that “the kawaajat” sanctions will not end the conflict in his country.

“If the khawajaat [whites man] agree that this country should be sanctioned, we are totally rejecting it… the threats of sanctions will never work, they encourage more war and bring no peace in the country,” Said the speaker of the deserted National Legislative Assembly, Hon Magok Rundial.

Principals’ delegations negotiating the final round of peace agreement in present of mediators in Addis Ababa….

Following three days of negotiations between the two warring principals, which expire tonight, the regional bloc has allowed the principals to negotiate pass the initial dateline, March 5, 2015.

“The IGAD Special Envoys for South Sudan announce that President of the Republic of South Sudan Salva Kiir Mayardit and Leader of the SPLM/A (In Opposition) Dr. Riek Machar will continue negotiations tomorrow morning, 6 March,” reads a statement released on Thursday evening.

IGAD however cautions the principals to use this extra minute wisely as Special Envoy prepares its Press Statement.

“The Special Envoys urge the Principals to use the limited time that remains to make progress on the outstanding issues of the mediation agenda. A further statement from the IGAD Special Envoys will be forthcoming tomorrow.” The statement adds.