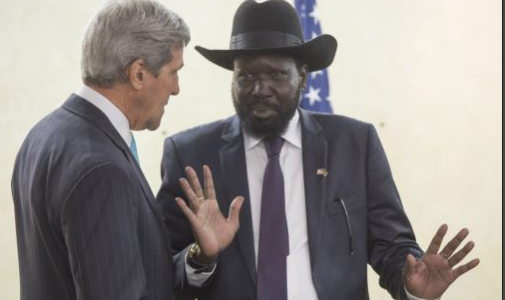 March 13, 2015 (Nyamilepedia) — The other day I read a story taking about President Salva Kirr claim which states that he will fight European Union, African Union, United States of America when they issued threat of sanction against his government and have criticized them for not doing enough to solve the current South Sudan political crisis that started in December 15, 2013.

Does SalvaKirr really study his environment and some of the fundamental facts about the current political situation in South Sudan?  Let me share with him if he doesn’t know before he commits another mistake of starting another war which he cannot win.Upper Nile State and Bentiu State are war zones with about 95% of people opposed to his misrule and have nothing to do with him other to see him out of power once and for all as soon as possible.

To convince these angry discontented forces of armed strugglers in these regions to join Kirr in his fight against international community, will be equal to telling him to bring the twenty thousand innocent Nuer  20,0000, he masscrered in bloody nights of December 2013 in Juba back to live. Something, Kirr will find it impossible to do in his life time and beyond.

Bar-el Gazel region who’s comfortable with as his home area and commanding a good number of support of his tribe mates who seems ready die for him to remain in power for life, have some good population of none Dinka’s who are suffering daily under Kirr domination and his indiscipline tribes men terrorizing them in the region and to tell them to fight for him in his new war, will not work even if by force by the power of his primitive private tribal militias.

Equatoria regions which have been suffering from Dinka brutality since Abel Lier era, to 21 SPLA/M rebellion era, to Salva Kirr 10 years of terror in the region and have been dying in silence in their God given region, the heat of volcano at Mt. or Jebel Kujur which regime renamed Jel Dinka, is boiling underground waiting for Kirr madmen to shake it a little bit before it can erupt, will not be fooled with Kirr again but they will the ones to be on the side of coalition of willing to arrest him.

Add this to the recent declaration by the chairman of people’s resistant movement for national mobilization, Dr. Oyat, who declared Equatoria a war zone, you will realize the time of madness in our region is almost over. This time Kirr and his criminals will not know how they entered Juba.

Uganda People’s Defense Force that miscalculated its mission in South Sudan and which have been degraded by our freedom fighters who reduced UPDF thirty years of military preparation to nothing and as one of the weakest army in Africa, is not only embarrassed by the military defeat and humiliation of outstanding of army in the world, the revolutionary army of Independent Federal Republic of South Sudan, they cannot fight the same super powers countries that have given them the military logistics to invade our country.

The remaining loose soldiers who are suffering quietly with poverty due to unpaid months of salaries to feed their families and are forced to die for Kerr power for free, will tell him that that’s moment they need their freedom to show Kirr how they have starving under his watch.

So, in this kind of environment, how can you start another war against international community, Mr. President Kiir? You are incapable to fight for your position without Uganda army, how can you touch super power?

Let your Dinka Consult of Elders, your Tuku Beny militia, and some of your few ministers and other government officials whether in the country and the foreign missions, which are sucking up you, not to continue decieve you because these people around actually love the money you give them but not you as a president.

In fact, they are only constituencies that you are representing and you are their president but not the majority of our population in the country. If you think this is joke, just make your blunder and will you see what I am talking about.

Mr. President Kirr, you brought this situation for yourself because you have not been listening to people. You don’t see the widows of our martyrs as human being and don’t care about the suffering of their children whose fathers fought for 21 years for free of charge until death for the same country you make your own and for your warrap gangs. You fail to unite the country because of your bad behavior and that of your security apparatus. You damaged South Sudanese human capital and resources, talent, skills, and potentials worse that the British and Arabs combine.

What you value is the importation of East African prostitutes and their diseases to South Sudan and makes these nationals work in our government offices when the same people used to take away even beans and maize provided by UN from our poor refugees during years of struggle, let alone giving jobs as house mates or cleaners to them. You made South Sudan, worse than Sodoma and Gomorrah of biblical time.

You deprived our people all the simple basic services, such as food, water, health care, housing, education, employment, security, electricity, because you and your officials get these services in foreign countries because you looted the coffers of the country beyond and worse than colonial time.

More so and as a result of these shortcoming of yours, you led us into a number one failed state/country in the world. How can a failed state that is unable to feed its citizens, give them health care, provide security to people, and cannot defend its sovereignty from Sudan’s rebels, Ugandan, Rwandan, DRC, and Burundi armies, fight international community?

You must be joking and if you blunder this time, it will be your final suicidal mission that frees our masses from your reign of terror for good.

You can reach the author at laku2000@yahoo.com

7 comments for “Kirr’s War Against Super Powers Is a Suicidal Mission.”

South Sudan’s ministerial order on vehicles operating within its borders