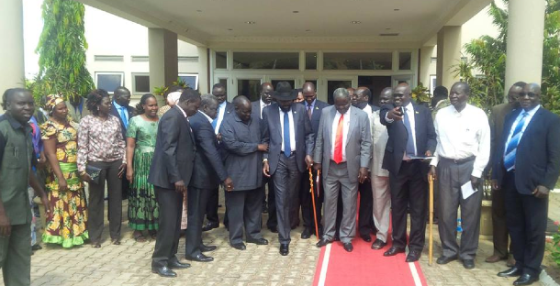 President Kiir and his Loyalists in Juba 2014(Extracted Photo/Nyamilepedia)

March 19, 2015(Nyamilepedia) — When you observed the current stigma and discrimination directed toward the Nuer who opted to remains with the Salva Kiir genocidal regime after the ethnic cleansing of the Nuer population in Juba by President Kiir private militia known as Dut Ku bany ( Rescue the both ) , Gelweng and Mathiang Anyor who are mainly recruited from Northern Bhar lgazal and Warrap States under command of Paul Malong Awan , the former Governor of Northern Bhar lgazal and current Chief of General Staff for the Kiir tribal militias forces in Juba.

You can really confuses and ask yourself many terrible questions without genuine answer and the common question in the mind of many Dinka, Nuer and other South Sudanese citizens is that. Why the Nuer Senior officials whose community had been ethnically cleansed by Salva Kiir regime opted to remain within the same system that is killing their own people?

The testimonies from the people who were in Juba when the crisis started in December, 2013 indicated that all those Senior Nuer government officials and politicians lost their close relatives and brothers in the hands of the Dinka militia during the ethnic cleansing campaign in Juba simply because of their tribal affiliation and they could not do anything to protect their people from being slaughters by the same regime they claiming to support.

The finding clearly indicated that, majority of the Nuer civilians who lost their dear lives in Juba were victims of their natural ethnic identity and have nothing to do with political affiliation because majority of them are not politically affiliated to any party to conflicts.

The summary of Juba victims statistics and testimonies from the witness of Juba ethnic cleansing clearly shown that all senior politicians who opted to remains with Juba regime lost their brothers and close relatives during the massacred. Good samples are as follows 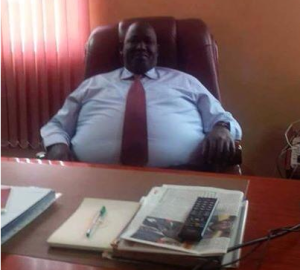 Rt. Hon Manas Magok’s office secretary was killed by the government militias during the ethnic cleansing campaigns because he is from the Nuer and Rt. Hon Magok could not protect his own family who ran to UNMISS protection facilities for their safety and opted the same regime.

Gen. James Hoth lost his best cousin who was at the same time a member of the National Liberation Council and die heart supporter of Salva Kiir regime and other four relatives at hands of the Salva Kiir militias and Gen James Hoth who was in charge of the South Sudan army could not do anything to save their lives. I also learnt that James Hoth even hides his mother and father in the house of the Equatorian out fear of being killed in his own house and he still opted to remain with the same regime.

Hon. Kuong Donhier Gatluak, the Minister of Road and bridge lost six of his brothers and cousins in his house during the ethnic cleansing campaign and he opted to remain with the same regime that killed TWO of his own blood brothers.

H.E. Joseph Nguen lost his own body guards during the ethnic cleansing campaign in Juba and opted to remain with the same regime.

H.E. Simon Kun lost his own brothers and body guards in the hand of the Dinka forces simply because they are from the Nuer and he also opted to remain with the same government.

Hon. Elijah Liech lost his brothers and relative when he was attacked by the Dinka in Baliet and was survivor of the killing and finally opted to remain with the same regime that killed them.

Hon. Yiey Puoch lost his sister and four children in the hand of the Dinka regime and he killed some Dinka in Malakal as revenge and later on chosen to surrender to the same regime after one year.

Hon. James Khan lost his colleagues and relatives in the ambush in Baliet including his office manager and later on chosen to surrender to the same regime

Hon. Martha Nyamal and Hon. Reat Gony lost their brother Koang Toang during the ethnic cleansing campaign in Juba and opted to remain with the same regime.

Gen. Johnson Gony lost most of his body guards at the hand of Dinka militias during the conflict and opted to remain with regime.

Gen. Lual Chuol was forced to run away from his division out of fear of being assassinated by the Dinka forces in division seven and opted to remain with regime.

Gen. Charles Lam and Nhial Batoang lost their best boy Dang Yien in the hand of Dinka militias in Malakal and opted to remain with the regime.

Hon. John Khor lost six family members comprised of his cousins and brother’s sons including one Australian citizen in the hand of the Dinka militias in Malakal.

The burning question is after all those losses and ethnic target killing of their brothers and relatives by the same regime simply because they are from the Nuer not their political affiliations.

To me the sincere answer was offered by our fellow Dinka who term them as the Nuer Wew or the Nuer of money in English. This Nuer of Wew/Money only knows money and forgets about their people.

The other question is what shall be the future of the Nuer Wew or the Nuer of money in South Sudan? 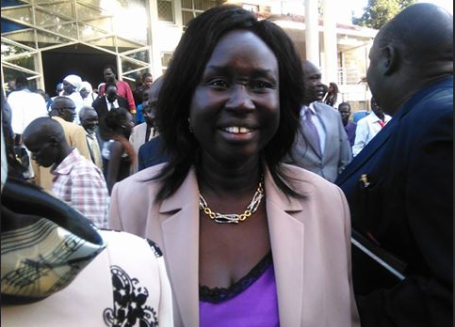 With the drainages of money which was motivating factors for them to remains in the wrong side of the history and potential disintegration of the country on tribal basis. The question is where will this Nuer of Money Wew/money go to? And what will be their final destiny. The reality is that Only God knows the future and the destiny of the Nuer Wew/Money in South Sudan

The writer is concern South Sudanese Activist and can be reached via lualmagok@yahoo.com

← Salva Kiir made irresponsible donation
UK and USA Frustrated With Juba, Demand End To Act of Terrorism and Call For Accountability →

18 comments for “What is Future and Destiny of the Nuer Wew or Nuer of Money in South Sudan?”