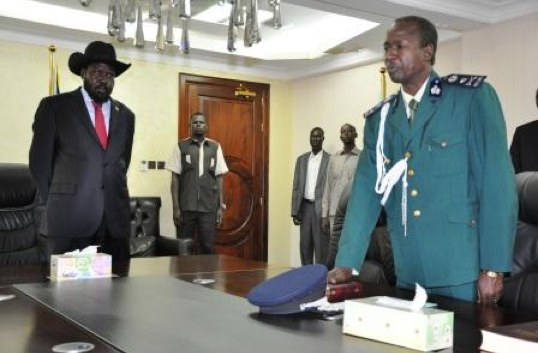 The police inspector was dispatched to his home town on a government mission to monitor security situation on Tuesday this week.

Upon his arrival, however, the inspector discovered allegations that his colleague, Gen. Santino Wol from the neighboring Aweil, has been ordered to monitor and arrest him on charges that he has rebelled the government of President Salva Kiir.

Gen. Pieng promptly responded through Eye Radio in attempt to clarify that he was dispatched by the government and he had no intention to defect as alleged by his colleagues in Juba.

“I want to tell all our citizens that this is not true. I don’t think I can defect. Where can I go?”Gen. Pieng told Eye radio.

“I am Inspector.  I’m in the last police rank. I am a General. I can’t defect. General can stay and do something else because he is not a politician.” Pieng elaborated.

Despite his attempts to clear the allegations, Gen. Pieng cut short his visit and returned to Juba on Friday to contain the situation.

Upon his arrival at Juba airport, Gen. Pieng further clarified that he returned from Agok as commissioned but not from the alleged rebellion, say:

“I just came back from Agok where I visited Abyei area and am now back to my headquarters. I hope that people will not say that I have come back from rebellion,” he said.

“I will be the last person who will rebel,”the embattled General reiterates.

Pieng, a native of the disputed Abyei, reminds his opponents that he has contributed so much to the liberation of the country and therefore he should not be suspected by people whom he considers as his comrades.

“Maybe it was another Inspector General, it is not me,” Pieng said.

Gen. Pieng is not alone. His colleague in arms, Gen. James Hoth Mai, the former Chief of General Staff of the army, fled the country on foot on Sunday night to Kenya, where he reminds in exile while monitoring the situation.

Upon his arrival in Nairobi on Monday this week, Gen. Hoth refuted through Eye radio that he was not fleeing an arrest warrant, which was issued and leaked two days before he left the country.

“It is a mere lie, and it is actually people who want to just confuse the situation in our country.” General James Hoth Mai said.

Gen. Hoth believed that he left the country to visit his family in Kenya, which he has not visited for more than half a year.

Coincidentally, the warrant, which was leaked following the confidential meeting between the president and the top generals of his security forces at the national security service on Friday, aims mostly at the two generals, Gen. Pieng and Gen. Gathoth Mai.

A third target, who is least affected this week, is Gen. Mach Paul, the former chief of military intelligence, who fled the country last year.

According to a reliable insider within the national security, Juba has given his security apparatus a green light to arrest all the outspoken Generals, who have denied the coup allegation in the recently leaked African Union Commission of Inquiry report.

Whether these events are coincidental or circumstantial remains a mystery!

← Losing South Sudan Territories Amid Civil War, The Case of Nadapal!!
The South Sudan Faltering Peace Talks: What is Wrong with the IGAD Peace Process? →