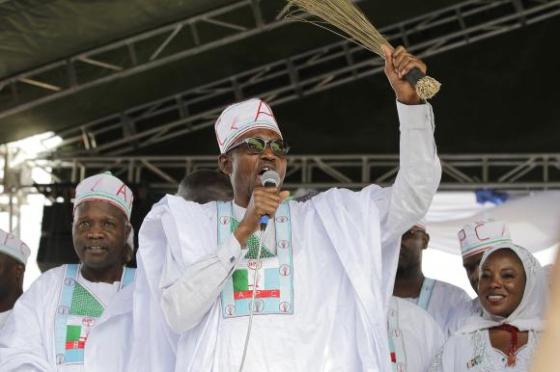 April 01, 2015 (Nyamilepedia)––One of the best election in Nigeria was officially concluded with General Buhari defating the former President, “Goodluck” Jonathan, who holds a PhD in Zoology. Unlike in the last three elections in which the candidates won with landslides, Gen. Buhari led the election with 56 percent and followed by Dr. Jonathan with 46 percent.

Observers have generally praised the election but there have been allegations of fraud, which some fear could lead to protests and violence.

A spokesman for Gen Buhari’s All Progressives Congress (APC) party praised Mr. Jonathan, saying: “He will remain a hero for this move. The tension will go down dramatically.”

The APC issued a statement after the result was announced, calling for “calm, sober celebrations” and warning supporters not to attack opponents.

“He or she is not with me, whoever does that,” the new president said.

“This is a hugely significant moment in Nigeria’s turbulent history. Never before has a sitting president been defeated in an election”. Said Will Ross a Nigeria Correspondent working for BBC, Abuja.

Nyamilepedia Press team tried all the best to get the reactions of the people in Nigeria of what exactly is it like to have Gen. Buhari as the new President of Nigeria?

“I’m Proud of Nigeria right now….I have always said it here that I’m pro Nigeria not pro party so I will like to say Congratulations (to the incoming president) General Muhammadu Buhari. Thank you to President Jonathan for conceding honorably. God bless Nigeria! May this be the beginning of real and sustainable change we all want and prayed for in Nigeria.” Said the Nolly-wood actress Uche Jombo when reached by Cde.Sirir Gabriel of Nyamilepedia Press Team.

Nigeria a country located in western Africa has shown the whole world the meaning of a real democracy and also the Former President of Nigeria Mr. Goodluck Jonathan has also done enough in sending a strong signals to all his counterparts in African Countries.

Since independence from Britain in 1960, there have been numerous coups and most elections have been rigged.

“Of course in a close election there will be many voters who are not pleased with this outcome but the whole process is a sign that democracy is deepening in Nigeria.” Said one of Nigerian activist.

Many observers have acknowledged that the poll has once again brought to the surface dangerous religious and regional differences and there is still a threat of violence. The man who has been voted out, Goodluck Jonathan, has played a huge part today in trying to prevent that. He made the phone call when there would no doubt has been some in his camp who would have preferred to dig their heels in.

Results at 6:00pm local time showed Gen Buhari with 15 million votes while Dr. Jonathan closely followed with 12.8 million votes. However, the results have been declared in all states, except for Borno, which is viewed as one of the APC’s strongholds.

He ruled Nigeria from January 1984 until August 1985, taking charge after a military coup in December 1983 and left through a military coup as well. Mr. Jonathan had led Nigeria since 2010, initially as acting leader before winning elections in 2011.

Nigeria has suffered from several attacks by the Islamist militant group Boko Haram, which has killed thousands of people in its drive to establish an Islamic state. Many voters have said that they believe Gen Buhari is better positioned to defeat Boko Haram.

The verdict on Mr. Buhari’s 20 months as military ruler is mixed. Muhammadu Buhari, Nigeria’s new leader. A lesson has been send to other Presidents in Africa to follow the example of Goodluck Jonathan.