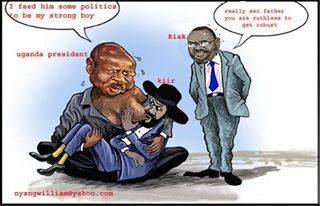 April 5, 2015(Nyamilepedia) — Since the beginning of this man-made crises, the regime has tried everything that is possible to stay in power while invalidating the heinous crime that it has committed to our beloved country by killing its own people base on their ethnicity. This is the crime against humanity as it has been proven by the AU report.

As the matter of fact, the regime has been running back and forth by bluffing the world and using an ineffective organization known IGAD as the only one that could bring peace in south Sudan. If one has the logical reason as I have, how can an organization whose member states has been the part of the ground war makes the peace in the country? Be the judge!  could that be possible if one clearly differentiate the human waste and the cow dung? This is blooey circumstance in my view on IGAD since the beginning of the peace negation and will never work as I prognosticated it earlier in the previous articles that I wrote. It is just as the business as usually. As the reality,  The regime uses the IGAD as the delaying tactics to buy time for its survival in order to mislead South Sudanese that the peace is going to materialize in the days that will never come to life. But the truth of the matter is, one can buy people but not the truth. The regime can run as much as it wants, but will never win the race of authenticity as the western phrase goes “you can run as much as you can, but will never hide from your crime.”  This will be so with the regime of kiir in southsudan.The blood of the people that it premeditatedly killed will haunt the regime in the days to come if not months.

Moreover, the regime has not been using only IGAD as the tool to make peace in south Sudan. It went further to influence the AU commission of an inquiry headed by the former Nigeria president Olusegun Obasanjo by delaying the report that supposed to be released in February of 2014.As the matter of fact, the regime argues that it will jeopardy the peace negotiation while in fact the peace negotiation has nowhere to go since then. It remain as it has been despite the report being delayed. These are all the very tactics of the regime to the benefit of its survival. There will be  no tangible solution in term of peace being achieved on the watch of this regime. It will remain as deadlocked as it has been because the argument that the regime always won is the intransigent argument. This is always the argument of the persons to say at least who do not have capacity to resonate things. As the phrase goes in Nuer language, “if you chat with the girl that does not know how to deal with man, she can only say no and only no that matter to her and knows”. That girl will just repeat the word No for the period that she may be together with the particular man. This is the same scenario with the regime that has no logical explanation as to why it does not agree to anything that could bring peace in the country.

In addition, this regime will do everything that it wants to do to stay in power but not what would make peace in south Sudan. It actually does not like the country to have peace because it will not subsist in peaceful south Sudan than what it is now. It was not surprising to me when I heard on the news that the regime extended its years as well as the parliament’s to 2018 as the looming end of its term in July. I knew such a thing could happen because it’s all about Kiir’s. What he says is what works for the rogue regime.  In this scenario, when you look at this erroneous amendment that is not in south Sudan constitution as experts delineated, how would you really think about the peace as the regime always singing the song of it in their mouths not in their actions?  Would any of you believe in this regime to bring peace? Of course not in my view! It is really far when it comes to the reality. The regime does not favor the peace than the war in the country. This is so because it knows very well that the case of people that it killed with no apparent reason will indeed haunt them later. This is the reality and will remind as such for the years to come.

Nonetheless, it is not matter whether you’re the nerdish supporter of the regime or not. We are in it together. The matchless  example of this is Gen. Bwogo Olieu who was staunched supporter of kiir and killed by regime’s. To make myself clear to those who may be hanging around with ambivalence, this regime does not care whether you are with “them” or “us.” The aim is one. It is to kill every South Sudanese who appears to oppose it and demand his/her rights. If you are there waiting for the donkey end of the month, well, you are on your own like Gen. Bwogo and expect worse to come in the days and months ahead. This is a truth that cannot be ignored by reasonable person. However, you may goofily think I am politicizing it. But at the end you will see it as a mentioned Gen.In addition, I would like to add the phrase that was said by the  Nuer prophet known as Ngundeng that goes like this “  the problem is the pain  only knows by one person.” This is true. A lot of people do not know that the threat of this regime is real. I wrote an article about the incident like this in mid-October last year titled “To who might be Naïve if not nerd in this crises. “If you have enough time you can read it in Nyamile.com. As the saying goes, indecisiveness is the disease of mind that in fact resulting in person losing all his/her potential. Don’t let yourself be a victim of your own decision as the Gen did. Takes a decision based on the things that are going on in south Sudan right now. Are things good or bad in your view? Human being is created to use logic to digest things for his/her own survival. This problem was initially seen as the Nuer one. This is exactly the policy of divided and rule that you heed not to follow. But in the days to come, it will no longer be the case. This will not be matter whether you are Murle, Bari, Dinka, shulluke you name it. The regime will be relentless on whoever seems to argue with its loyalist. But it will not be able to win the race of reality. Kiir may try to divide us but People of south Sudan will be victorious at the end days if not months to come and jointly sing the song of south Sudan Oyee.

Finally, Kiir regime can do anything to keep itself in power by running to IGAD, AU and extending its term to stay in power. But will never win the race of reality. People of south Sudan are matter than the power. However, in this case, the truth will prevail and struggle continue until the regime eventually goes down to its knees and the victory is certain.

The author is the Maverick South Sudanese that can be reached at lam981@hotmail.com