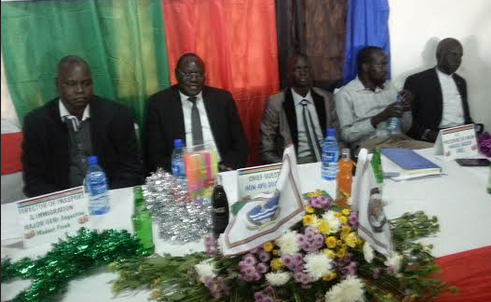 March 7, 2015(Nyamilepedia) — The victory ceremony was conducted on 5th April 2015  by the leadership of above association as an honorary of South Sudanese students president in Uganda  Mr. Makuei Aguer who comes from Warrap state. Mr. Makuei won elections  in 2014 after toughest students politics,  which made him to be a students leader in  Uganda. However,the chairperson of Warrap state and colleges in Uganda Emmanuel  Majok Akuecbeny Majok with his executives decided to call South Sudanese ‘s country tycoon and chairperson of South Sudan business Union Mr. Ayii Duang Ayii as a Chief Guest of honor of the function.

The ceremony was attended by a hundreds of South Sudanese students in Uganda as to celebrate the honoring of their leader which was conducted by Warrap state students leadership in Uganda.  chairperson of Warrap students opened the ceremony, welcomed the hundreds  of  students, various dignitaries, women and girls. He appreciates Ayiidit the chief guest of honor for accepting an invitation to come to Kampala to chair the function and give pieces of advices to South Sudanese students in Uganda.

Director  general of migration and passport major general Maduot Parek  who was also invited to in the ceremony encouraged the students of South Sudan in Uganda to be productive after the studies, as an intellectual you need to be creative he added.  The migration director urged  the number of people who attended the ceremony  especially the students to work for peace in the country.  Maduot said to students to try hard to fight for tribalism. The states were divided just for location of resources to  reach people not to divide the South Sudan ‘s population Maduot told the gathering members. He reminded the students that migration ‘s department had employed over one thousands fresh graduates, some have degrees and others with diplomas.

Emmanuel Majok Akuecbeny, the chairperson of association who organized  the celebration  once again told Ayii Duang Ayii that the South Sudanese students in Uganda are educated and they are enable to make changes  in the country in all the sectors. The chairman reassured all students that his leadership will ensure the students’ relationship is paramount across universities and colleges in Uganda. He added that states Governors are not updating  the students in foreign countries about the developmental programmes and political crises facing the country.
The South Sudanese students  union president in Uganda, Makuei Aguer  congratulates all the students in Uganda who were in the ceremony, before continuing talking Makuei told the people of Warrap state that I came to leadership with the help of all South Sudanese not only Warrap people.The president told the people about solidarity ad unity shown by South Sudanese in Uganda. He gives thanks to all his  supporters who struggled to make sure he gets  the union leadership.
As the current president of students in Uganda, I will make a union as an eye of South Sudanese students irrespective of tribal  and region background. cooperation and unity among South Sudanese communities should be prioritized.
The leadership capacity will work hard to mitigate the challenges students are facing in Uganda as we had witnessed the dropping out of students in various universities due to increase rate of hard currency in South Sudan. Take education seriously and be a discipline students Makuei told the students. He also appreciates Ayiidit for contributing to business sector, saying you Ayiidit had inspired us in business Makuei concluded
Conclusion, despite the division among the communities in country,  the South Sudanese students in higher education in Uganda have strongly maintained their relationship since the crises till this movement. These students are globally appreciated for neglecting tribal affiliations which caused hatred. we  see each other as brothers and sisters regardless of what happened in our country said one of the student.
By Mangong Mawien Madut , Warrap state students association correspondent. He is also blogger, Essayist,  columnist and writer