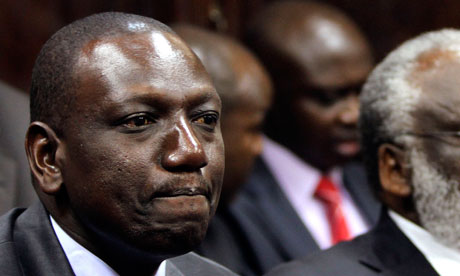 According to Hon. William S. Ruto, the Deputy President, Kenyans will relocate the refugees if the UHNCR fails to comply with their request.

“We have asked the UNHCR to relocate the refugees in three months failure to which we shall relocate them ourselves” Hon. Ruto said.

Speaking in Nyeri, Hon. William Ruto warns that “the way America changed after 9/11 is the way Kenya will change after Garissa.”

Ruto assures Kenyans that his government will construct 700 kilometers wall between Kenya and Somalia from Mandera to Kiunga to prevent Al-shabaab from entering Kenya.

The Vice President tells Kenyans that their government will use all means at their disposal to secure the country, adding that this must be done even at a cost of losing business ties with Somalia.

“We must secure this country at whatever cost, even if we loose business with Somalia so be it, adding, “all those who are collaborating with Al Shabab will have their businesses closed.” Ruto reiterates.

The deputy president warns Kenya politicians to leave their political differences behind and support the government to secure the country at this tough times, saying:

“No politics, no games, no half measures should apply as the death of the 147 students must touch all Kenyans.”

Other members of parliament (MPs) have strongly reiterates the use of maximum force to secure the country from terrorists.

Al-shabaab, who claimed responsibilities of the recent attack and previous attack on West-Gate Mall, has warned Kenyans that their major cities will be red in blood.

The Al-shabaab has called on Kenyan government to withdraw their forces from Somalia, a call the Kenyatta’s government has downplayed!

← AK47 Gives a Right to Say Not Only a “No!” but a “Big No!”
Michael Makuei and his Incoherent Message about the Alleged Bombing Attacks by the Sudan →