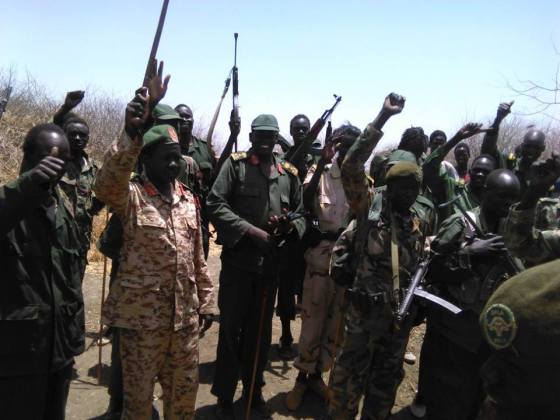 April 20, 2015 (Nyamilepedia)—-More defections still hit the government of President Kiir Mayardit whose army defects every now and then accusing him of lack of good governance and shortage delivery of services to all soldiers in the front lines.

According to our source in Amdalwich military barrack, a Platoon  has defected today from Juba government troops and join SPLA-IO under the former Vice President Dr. Riek Machar Teny.

On the their arrival at Amdalwech the special division one head quarters under Gen. Koang Chuol Ranley, they were received by Brig Gen Peter Liem Bol and Brig Gen Peter Puok Koang.

On their side the 2nd.Lt Comrade Gatjang Bethoah Yuaal the Commander of the defected platoon said he is very thankful to SPLA-IO especially the Division One Leadership for welcoming them.

“I am very thankful to the leadership of division one for the warm welcoming, I and my colleague are very happy and will be committed to work with you till the end ” said 2nd.Lt Comrade Gatjang Bethoah Yuaal

However, Gatjang Bethoah blame their former colleagues for bad treatment and higher rate of discrimination…

Nyamilepedia will update the public accordingly

← South Sudan: SPLM-IO Leadership Conference Continues In Pagak!
The South Sudan Civil War: Who is Responsible For Failure of Peace? →

19 comments for “A Group of Government Soldiers Join SPLA-IO”

Understanding why we are opposed to “Regime Change” ~ Mabior Garang

Opinion: Kitgwang Declaration is both for peace and war, no surrender, no family enrichment projects!