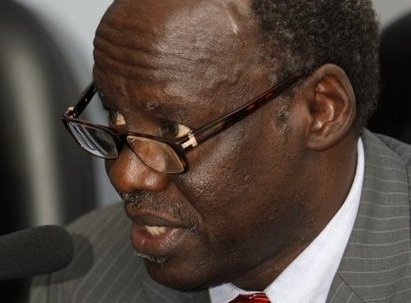 The Chairman of SPLM-DC Dr. Lam Akol tells the BBC that his live is threatened in Juba, his house under surrounded by security forces(Photo: file)

April 24, 2015(Nyamilepedia) — The leader of South Sudan’s SPLM for Democratic Change, Dr. Lam Akol, who has served house arrest for months in Juba, was last night apprehended by the Security Forces for reasons that are yet to be disclosed.

“Since 9 o’clock in the evening. There are three cars here, some of them [security] are in the cars and others are around the building here” Dr. Lam explains to BBC

Immediately following the interview, the Opposition party leader, Dr. Lam, is believed to have been taken to National Security Service building.

Although the reason for his arrest are yet to be determined, a reliable source revealed to Nyamilepedia that Dr. Lam might be confined to prison until the situation, which involves his tribesmen in Upper Nile, is resolved.

“Lam has dirty politics in what is happening in Malakal, we approached him when the incident occurred but he refused to work with the government delegation” Said a top security officer who identified himself with a christian name due to fluidity of the case.

“He has to be disconnected from all sorts of communication until we find a solution to this scenario” He continued.

Dr. Lam believes that his arrest could relate to his speeches on political affairs in the country, adding that he recently criticizes reckless spending of national revenues on things like Independent Day celebration that do not bear any meaning at this time.

When asked if he has spoken against the government recently, Lam replied: “Yes, definitely, I cannot be keeping quiet when many things are going wrong here.”

“We have been saying public matters; there has been high rocketing prices as a result of inflation taking up. … [instead of spending] 129 million pounds for a celebration, we should have supported the lower income groups rather than spending money on things that are meaningless,  what are we celebrating anyway, there should be enough for the president to deliver his speech on that occasion but there is nothing to celebrate.” Dr. Lam told the BBC.

The DC leader is on records for denying the coup allegations that triggered the conflict in 2013.

Dr. Lam has also been accused of leaning towards Dr. Riek Machar’s platforms such as reforms and calls for democracy.

He is believed to have held closed-doors meeting with Dr. Machar in Addis Ababa before he was later confined to house arrest in Juba.

Dr. Lam is an ethnic Chollo, whose allied forces are currently battling the government troops in Malakal, Upper Nile State.

The top opposition leader, who lost elections against Salva Kiir in 2010 Sudanese elections,  returned to the country shortly before the civil war broke out. Lam spent two years in exile in Khartoum, Sudan, due to political differences with Salva Kiir’s administration.

← Peace And War: Whose Interest Is It In South Sudan?
Canada: Invitation To Attend The Briefing Meeting by High Level Delegation Led by Hon. Hussein Mar →

14 comments for “Top Opposition Leader In a Security Cell In Juba, South Sudan.”