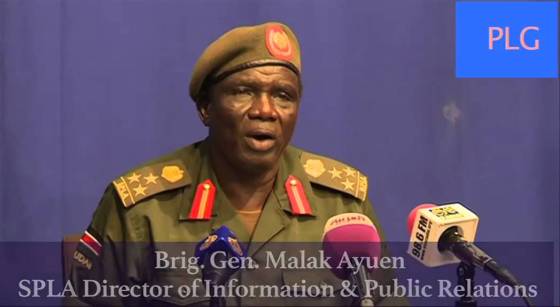 April 27,2015 (Nyamilepedia)—-I am writing this few paragraphs to you for the reason that you are well informed of. Gen. Malaak, everyone is unhappy about how you held and utters your daily presentation in [SSTV] the country’s popular Television.

The Country’s tribalism rate, nepotism rate and killing rate is continuing to be higher just because of your hatred discharges to public through the national TV.

Brig. Gen. Malaak Ayuen Ajok, I am a simple man who is prompt to react, I stopped watching the state own Television because of your hate speeches and messages against other tribes in the country, and I hope many others lost hope the same way to watch the country’s TV (SSTV) for reason clear to be you destroying the media.

Gen. Malaak, hatred only bring a man down to a total destruction rather than making a man successful in life, I would advise you to review your presentation and to fully abstain from dirty politics for it is written in the transitional constitution of 2011/ SPLA act that soldiers shall not participate in the national political arena. Brig. Gen Malaak Ayuen, I want to remind you of the crimes you committed some years back.

Between 1986-1987 you were an officer in Military Police unit deployed in Bentiu ‘Tharkuer’ barrack. You were a controller of armory and other valuable staffs in the barrack since you were among the few intellectuals in that barrack.

With your heart of Satan you decided to sell guns to the local population which made you to be arrested and taken to Leer town which was the HQts of Dr. Riek Machar who was by then had the current ambassador to Russia Hon. Telar Ring Deng as his chief Justice and whose court was in Leer too. You were kept for some months in Leer military prison by his Lordship Justice Telar Ring Deng.

The same Telar made consultations with Bonga/Bilpam general headquarters for your possible sentence to death for violating the regulations of the movement and for selling the weapons.

Dr. John Garang on hearing the case immediately issued an orders that read “Lieutenant Malaak Ayuen MUST be killed through firing squad”. As commanded, Justice Telar approved the Chairman’s order and dressed you up for your fateful dismiss, but what happened next?

When the letter reached the desk of Dr. Riek Machar, the current leader of the opposition, he decided to downplayed the orders and look for other possible and peaceful ways to get you out of situation. At the same time, Dr. Riek must have been your Angel Gabriel, sent by none but God to save you!

He, Dr. Riek, and his boss, Dr. Garang, agreed to set you free due to some facts that Dr. Riek Machar had lateral understanding with Garang, through understanding Dr. John forgive and forget your incident. I wish it should be a lesson you should not forgot so easily.

Although both you and Telar later turned against your personal savior, Dr. Machar Machar, it wasn’t very long ago (August 2013) when Telar accused Dr. Riek of reversing your death sentence although he was not a lawyer. So Mr. Malaak, what unite you with your killer (Telar) today against your savior must be none but Satan.

I thought you had learned. After you were freed from jail, you was set for mission to take the 4000 children (Red army), who were stationed at Koch Mayiandit County, together with Brig. Gen. Ruai Makuei, who was by then a Sgt. to Bonga for military training.

Gen. Malaak by the time you left Adok el Bhar, for Tayer, Ziam-Ziam and unto Shambe where you ordered the Ship Captain to station the ship for a day and asked the Dinka of Lake state to load cows inside the ship which was small to carry too many cattle.

After collecting money from the passengers who loaded the ship with their cows. You ordered the captain to continue with journey toward Bor. Not far from Shambe, the ship wrecked and killed almost the entire crew God was great there was survivors to name but only few.

The children [red army] were lost and the cows that overloaded the ship also perished. When Dr. John Garang De Mabior heard the news that the red army had sank to death in River Nile due to your recklessness, he sent a unit of army to arrest you and take you to Jabel Buma Prison where Kerbino was jailed.

Dear Malaak Ayuen, who among the Dinka commanders came for your help? There was nobody. Who was bold enough to confront Dr. John Garang to withdraw his decision of killing you? There was none but only Dr. Riek Machar Teny Dhurgon, the only Angel who can save a sinner like you twice.

After the split of SPLA, the officer who was in charge of Jabel Buma jail was from Nuer of Gajaak. When the movement split, he also defected to Dr. Riek’s faction, taking all the prisoners with him including you, poor Malaak, and you were delivered to Dr. Riek in good condition.

Not so long afterwards, you became the writer for the commander himself [Dr. Machar].  The kind general even promoted you, given his good hospitality, not knowing that you were a wolf in sheep clothing till you deserted to the other side in Panyagor where Cdr. Kuach Kang met his death.

Perhaps I also understand how you left SPLA for refugee camp and to come back in 2004 when Gen. Salva Kiir the current incumbent President defect against Dr. John Garang de Mabior. This was the moment you returned together with your colleagues Michael Makuei Lueth and Telar Ring Deng and joined Salva Kiir because you already had no position in Garang government.

Had it not been the fateful death of Dr. John Garang, you could have been in exile or dead by now.

And the same Good Samaritan, Dr. Riek Machar, you hate so much today made your boss Kiir to reconcile with Garang in Rumbek in 2004, which made us reached to where we are today.

If Dr Riek didn’t speed up to resolve the differences between Kiir and Garang, we could never have achieved the Comprehensive Peace Agreement [CPA] and get our Self-determination, yet it would hurt you so much to hear that Dr. Riek Machar is the Father of Independent South Sudan when you never had the nation but looting and corruption at heart.

Let’s learn to be thankful in life for what goes around comes around. South Sudanese are tired of tribalism, corruption, nepotism, ignorance/ supremacists race, violence and hatred among others.

We need eloquent presenters to preach peace and re-conciliatory messages to all ethnics in the country, instead of Malaak Ayuen who does not know how to say peace and forgiveness but violence and looting.