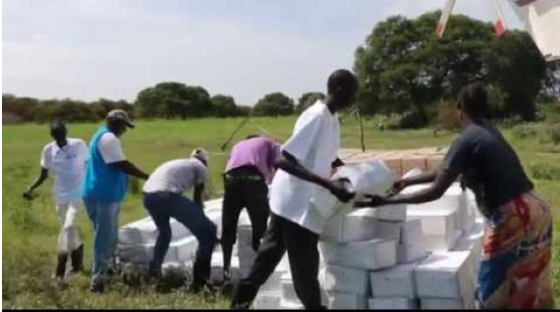 April 26, 2015(Nyamilepedia) — Following a condemnation statement issued by the United Nations Humanitarian Coordinator for South Sudan, Toby Lanzer, on 23rd April, 2015,  the SPLM/SPLA [in Opposition] responses with a circulation that explains what fueled the withdrawal of aid workers from Pagak, the rebels’ headquarters in South Sudan’s Upper Nile state.

As the statement explains, due to the ongoing leadership conference the security measures were tighten around Pagak.

“On 14th April 2015, WFP deployed 14 staff from Juba to Pagak on a Helicopter and among them four national staff were identified as officers from Migration and National Security personnel from Juba Government.” Gatwech explains.

The executive director explains that the aid workers felt threatened and silently withdrew from Pagak due to a conspiracy that is likely to stain the impartiality of the United Nations organizations.

The SPLM/SPLA [IO] points out Ms. Betty Juru as one of the national security intelligence identified among the employees of the UN-WFP.

“Ms. Betty Juru who was one of them confessed that she was indeed a former National Security Officer. This was the third case which we had countered with WFP Juba.” The Director explains.

Mr. Gatwech believes that two other incidents were discovered in November 2014, and in February 2015, also in Pagak.

Another isolated incident involved the landing of a government’s Brigadier General and two others WFP employees in a rebels held teritory in the town of Jiech, Jonglei state, in March this year.

Such incidents, according to Hon Gatwech, were discussed with the World Food Program but instead they have increased.

“The numbers of individuals from National Security employed by WFP have increased and whenever they are deployed in our areas, we detect and allow them to return to Juba without any form of retribution such as detention.” Mr. Kulang explains.

“We also have evidence that the Enumerators who are at WFP Juba staff are a conglomeration of National Security that are deployed by the Government of Juba to explore their work through humanitarian operation in the SPLM/AiO territory.” he added.

The SPLM/SPLA has also reported other cases in which they accuse the WFP staff in Juba Headquarters of having deliberately reduced the food allocations and delayed its distribution to many parts of their territories.

“For instance, it takes three to four months for food to arrive in the SPLM/AiO territory while in government controlled areas food is distributed normally and timely.” Gatwech points out.

To resolve these matters, the Opposition urges the United Nations to deploy their own staffs to avoid conflict of interests.

“Through many dialogues that we have initiated, SPLM/AiO have in several occasions informed and expressed our concern to WFP that we have qualified South Sudanese among our population that can do similar work by the very people (from National Security) that are brought from Juba.” The Director Explains.

The SSRRA further urges the Humanitarian agencies to provide equal opportunities among the South Sudanese by allocating job opportunities to all citizens on both sides of the conflict.

“SSRRA leadership expects all Humanitarian agencies and NGOs to provide equal and fair employment opportunities to all among South Sudanese especially youth (Women and Men) in the SPLM/AiO controlled areas not only to be recipients of relief services.” the SSRRA document reads.

The SPLM/SPLA-IO humanitarian wing explains that the question of neutrality only comes when they seek for the Rights of civilians in their territories.

According to SSRA Executive Director, Mr. Gatwech Kulang, the aid workers who left Pagak should return to resume their work.

“Therefore, the leadership of SPLM/AiO of Humanitarian wing would like to see those NGOs who left Pagak on the 22nd April 2015 to resume their operations.” Gatwech explains.

“Once again I would like to reiterate that The Humanitarian Wing of SPLM/AiO takes cognizance of the work of humanitarian agencies to provide life-saving services to our vulnerable people and the importance of us working together to achieve the common objective.” he continued.

Gatwech concludes that the two humanitarian agencies must continue engaging each other to ensure cordial working relationship between SPLM/AiO and Humanitarian workers are built.

On 23rd April, the UN humanitarian coordinator for South Sudan, Toby Lanzer, accused the opposition of having harassed and threatened the aid workers, and believes that such incident has impeded the humanitarian assistance in the affected areas.

Lazner warned that the organizations will not be able to assist civil population in Pagak and other areas until the conditions are re-established.