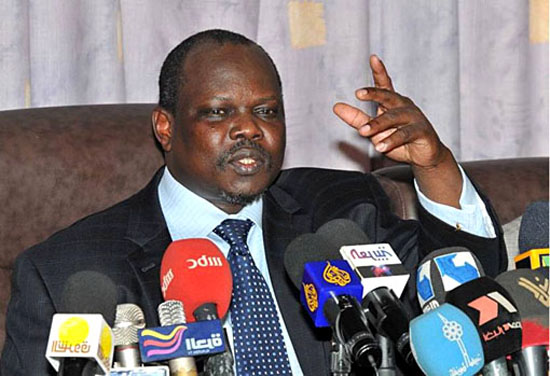 May 5, 2015 (Nyamilepedia)—We the South Sudanese people are blaming the Former Secretary for SPLM Comrade Pagan Amum Okiech and his colleagues because they were with Dr Riek Machar Teny in December 2013 and that was the beginning of South Sudan genocide that committed by President Salva Kiir in the Capital Juba. When they were freed by Dr Machar and then they changed their minds right away when they arrived in Nairobi, Kenya. Kenyan President Uhuru Kenyatta was spending his money for accommodation of these selfishness politicians who looted billion of dollars while their people are suffering up to now in South Sudan.

I am happy to tell every one of South Sudanese that Pagan Amum is not a leader of this country. This is what happened to him because he wants to get into power very quickly.

Pagan’s statement that Killing 25000 of Nuer people should not be used as an excuse to fight and this disturbed every one of South Sudanese.

I am here telling you about what Pagan said in the year 2007, that he thank God for creating Shilluk tribe to be the smallest tribe in South Sudan because everyone of Shilluk person loves him/herself and Shilluk man can bring fish from the river and he can eat it alone without inviting his wife or family members. All what he said about Shilluk is not true because Shilluk are good people like other tribes in this country.

Pagan and his colleagues are thinking that they can steal the government of South Sudan so that he kept contacting and telling people of the United States, United Kingdom, Norway, European Union, IGAD and African Union that Dr Riek Machar and President Salva Kiir have no right to lead the Transitional Government of National Unity (TGNU) of South Sudan while they have no any single soldier on the ground and they were eating their money without sharing other people. I think that Pagan and his colleagues will not smell this coming government but they will only rule their wives.

The only person that took the good decision is Former South Sudanese Ambassador to United States of America, Comrade Amb. Ezekiel Lol Gatkuoth who said that I will not be with G10 while my fellow South Sudanese are dying daily facing hardship in the Republic of South Sudan.

Second to that, what Pagan Amum is preaching against Shilluk tribe is not true and we the South Sudanese respects all Shilluk as we know that they are good people and one of them can lead this country any time if we agreed because every tribe has a right to rule in the government of South Sudan in the future.

My special appreciation goes to Prof Peter Adwok Nyaba, Former Minister of Higher Education, Science and Technology for his stands and strong approaches to the wider audiences nationally, regionally and internationally. Notably, he is the first politician of our time to break silence on the ongoing crisis while he is still under house arrest by the dictatorial regime in Juba. Also, he keeps telling the world what destroyed our country.

The South Sudanese around the world appreciate his enlightenment to the world. As such the world community understood the root-causes of the internal strive from his brilliant, articulated, unbiased articles which will be rewarded with lots of thanks.

God bless South Sudan!
Bayak Chuol Puoch
Former Chairman of Nuer Community in Egypt
You can reach me through bpyarkhor121@yahoo.com

← America Gives No Respect To “So Called Leaders” of South Sudan, but $5 Millions For Accountability!
Dear President Barack Obama: by the South Sudanese Americans! →