The World is Watching Genocides Committed by the Government of South Sudan in Unity State!

“The work of every government is to ensure the safety, the protection and the well fare of its citizens” Anonymous 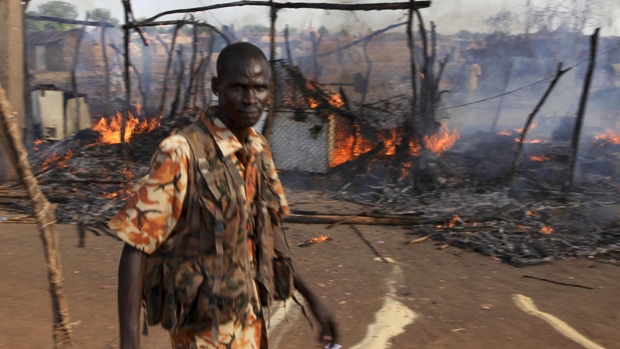 May 23, 2014(Nyamilepedia) — According to the United Nations reports, published recently describing atrocities committed by the government of South Sudan in Unity State, the reports said, on 27 April 2015 the government forces together with their allied militia led by Puljang Top, including JEM, launched offensives against the opposition forces in Mayom, Nhialdiu, and Guit Counties.

They continue their genocidal atrocities, targeting and killing everyone Nuer who is not supporting the regime in Juba. As a result of this targeting from the government forces, thousands of civilians were displaced from their homes and left everything they own behind and fled for their lives toward the southern areas namely, Leer and Koch.

Some of the civilians managed to flee to the UN base camp in Rubkona, and Bentiu for protection. The report stated that the number of civilians who were displaced from their homes in Unity State is over 100 000 people. All these people left behind everything they own and ran for their lives and are in desperate need of humanitarian assistance.

Apart from raping women, girls, abductions of young children and killing of innocent civilians in those counties, the government troops looted the properties, raided herd of hundreds of cattle from Leek and Jikang Nuer. Once the government forces knew that they destroyed and razed villages in Nhial Diew and Guit counties, they took another step and moved to Koch County where they committed others atrocities and displaced thousands of civilians from their homes.

According to reliable sources from the eyewitness, in Koch government soldiers made a dirty tricks and pretended that as they are not targeting the civilians: they summoned the great number of people and said ”we are government and do not kill civilians”. However, when the people came to them they started shooting them and killed them without reason.

The dinka government forces are currently in Leer, doing whatever they like according to their tribal interests and revenges. These are pure dinka revenging against their enemies the Nuer at the expense of leveling themselves as “the government of South Sudan”. The International Community knows at this time that South Sudan does not have a government but just one tribe trying very hard to blindful the world and illiterate minorities group that a government exists. Where on earth does government troops rape teenage girls and boys? Where on earth does government troops raid cattle and kill elderly and innocent civilians?

Many eye witnesses have independently confessed that soldiers have razed down major parts of Leer, and many villages around it were also burn down by government forces loyal to Dinka President Kirr. The eye witnesses said that some of government soldiers are stationed in Ghaf and Tai swamp areas looking after the cattle and the civilians who fled for their own lives to hide in swamps areas.

Someone told me in his hiding place by phone saying, the government forces are in Ghaf as we speak and gathered a large number of cows which they will later take with them to Bul community and Warrap states. Currently, there is no one at home in Leer County or Adok as a whole because every family there is displaced and went hiding in the bush or swamps areas.

“As you all know, there is no good place for hiding in Leer County, this is a big problem for us here” a eye witness confess in his hiding place.

“There is no doubt that many civilians are going to die of this barbaric, reckless and inhuman action from Salva Kirr tribal forces” said the witness.

The eye witness emphases that the government forces are currently stationed in Ghaf where they keep the civilians hostage in the swamps areas there they are exposed to mosquito and many dangerous snakes in revenge to 1991 tribal conflict.

They cannot come out of swamp areas because they fear Salva kiir forces that they will be killed. As a result of this ravage war the civilians which were displaced in Leer have no access to humanitarian assistance at all because all the NGOS which work in Leer have already been evacuated and there is no aid organization remaining there.

The MSF and the International Red Cross which work in Leer have also evacuated their staffs due to the insecurity in the area. It is therefore difficult for all displaced persons to get lifesaving medicine and food for their survival.

The situation in Unity state is beyond description because many families along with their young ones are suffering too desperately from tribal and clanish revenge. Unity state becomes a war zonem, which makes life difficult for the people of Unity state. The children never go to school like many other children in Lakes States and the Greater Equatoria. The people in Unity state cannot go on doing their daily activities normally because a tribal government force is hunting civilians and destroying their property instead of fighting the armed opposition without involving the civilians.

Based on this report, we appeal to the Speaker of South Sudan parliament Hon. Magok Rundial, the Caretaker of Unity state Josef Nguen Monytuil, Comrade Douth Diew, Comrade Taker Riak Dong and Comrade Wal Yai Gatkuoth and many others in military such as Maj Gen. PulJang Top and the Maj Gen. Baping Monytuil to think critically of what they are defending. You can’t defend someone who will rape your sisters and mother tomorrow. The genocide being carried out by incited Dinka and Bul youth in Unity  State in pretense of “protecting constitution” will affect any Nuer nationality very soon no matter what side they support today. You must think beyond “money” and political hatred. You cannot kill Riek Machar or Taban Deng by killing innocent children and elderly villages who have no blood line with Riek and Taban. This line of pretense reasoning is disgusting and illusive and must be abandon. You can’t help enemy of your tribe cleanse your people and continue to tap their backs. This is dangerous.

You know very well you were all born in Bentiu and you are the native of Nuer origin, your fathers, and mothers are all from Bentiu community in which you are turning your back and now mistreating as if it is not your community.

We belief, without the support of this community in which the government you are serving is now committing genocides in, you would never have been assigned to the positions you are now serving. You are holding those position because there has been a Bentiu community behind you guys.

The civilians which are being massacred by your forces have no involvement in the war and therefore should not be intimidated and humiliated in such brutal manners by a weak enemy that uses you and foreign troops to commit such massacres. The civilians your forces are targeting are not participating in this war, they are not soldiers, and they are just ordinary farmers who depend on cultivation of land and it is unlawful to order your forces to kill, burn down their houses, raping women and girls.

As you also know, this time is a rainy season when the people are coming together and busy preparing their farms for harvest because this cultivation of land is what our people relied on as the only sources of their incomes. But now the soldiers under your command displaced them from their homes and they all fled to the bush for their lives. You must advice all your soldiers to halt such kind of barbaric and demeaning tortures, which do not take into consideration any innocence. Let the soldiers refrain and halt all kind of degrading treatment against civilians. Let them leave the families alone in their homes in peace without touching their properties. Your forces must fight other forces but not children and women.

In every country in this world, soldiers are oriented to protect the civilians against external invasion and not to turn their guns against their own people; their main duty is to protect the country and its people from outside attack. To me, it is unlawful for a government, if legitimate as you claim, to kill and raze the houses of innocent civilians in vain.

You do not know that the families your forces are mistreating are the future of South Sudan and therefore should be treated well with respect and the human dignity. With this background, the government of Salva Kiir will never be proud that it provided a protection for it civilians in Unity states or in Upper Nile as a whole. How does a government claims that it is the one protecting the civilians against violence when its soldiers is their source of fear, violence and intimidation, the ones who commit all atrocities and the grave Human rights abuses against them in Juba, Unity states, Upper Nile, Bor and Rumbek? How are you supporting such a tribal government which kills and displaces your mothers, fathers, siblings, in-laws and relatives?

Your action disappointed us all your friends and relatives. Remember that such kind of violent is illegal and cannot be tolerated or supported by anyone in the modern era we are living in. The world is watching. Also, remember  that you can’t force people to accept and love you by terrorizing and submitting them to violence. Instead they will fight back until you re defeated.

The civilians have ultimatum right to decide who they want to be their leaders to represent their interests no matter what may. They will never accept you as their leaders if you continue mistreating brutally along tribal lines.

If the people forgive you, the history of this country will never forget the atrocities committed by the government soldiers under your command or leadership.

May the Almighty God bless the people of South Sudan!!

I am one of you, Daniel Kaitudel Teny a concern South Sudanese citizen living in Sweden. You can reach me at kaitudel@hotmail.com