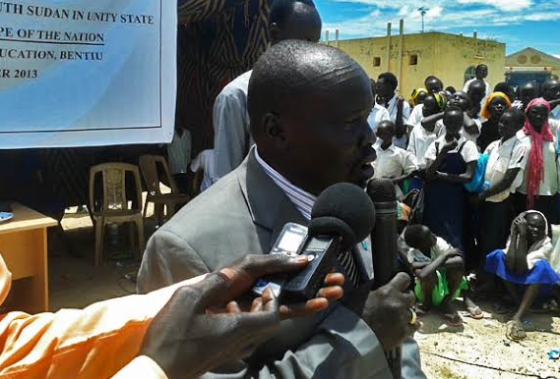 May 28th, 2015- (Nyamilepedia) — In an Interview with the former Commissioner of Payinjiar County, who also served as the Education Minister for the State Government, Peter Gai Jock Deang, calls for humanitarian assistance to the affected communities of Nyal and Taiyar that were attacked by the governments forces of Salva Kiir and Sudanese militias earlier this month.

In an investigative interview, carried out by Nyamilepedia press team, Peter Gai Jock, who was reached on his Hospital bed in Nairobi Kenya, said he has learned with profound shock “an unethical and barbaric attacks” on members of his community in Nyal and Taiyar of Panyijar County by a government he once served.

Mr. Jock said the attacks have directly affected nearly 30,000 (thirty thousands) inhabitants of Nyal and Taiyar, who were peacefully planting their crops while leaving in peace.

The former minister believes that the attacks have indirectly affected one hundred and fifty thousand (150,000) people, the entire population of the county according to 2010 election census that was carried out under Sudanese regime.

Mr. Jock, a respected politician in Payinjiar Community, said the humanitarian situation of the affected population is critical due to the fact that all their livelihood were destroyed by the government militia who burned and destroyed their property.

The troops burned down many homesteads and Taiyar Business Center, which used to convene many business activities between the people of Yirol East county of Lakes State, Bor, Twic and Duk counties of Jonglei State with their counterparts from Payinjiar county and counties within Unity state.

“Taiyar Market was established as a business market to mitigate border conflict. The market was initiated and support by AECOM International with the direct funding from USAID.” The  former Commissioner, Gai Jock, further explains

He believes that the market had indeed proven effective in bringing about livelihood changes among the communities of the three States, namely: the Unity, Lakes and Jonglei States.

Mr. Jock strongly criticizes Salva Kiir government for leading destruction of lives and property that it should have been protecting.

“This is a doom government that deserves total overhaul. Our people have done their part in fighting off such terrorism in defense of their people.” he reiterates.

Mr. Jock further confirms that  through his consultations with the current Commissioner of Payinjiar County, Captain John Tap Puot Kang, the security situation in the county is getting back to normal, however, members of the community are facing humanitarian hardships which requires immediate intervention.

He concludes by appealing to the International Organizations to urgently return to Panyijar County and resume provision of humanitarian assistance such as essential drugs, shelter items, clean and safe water and distribution of food among other emergency needs.