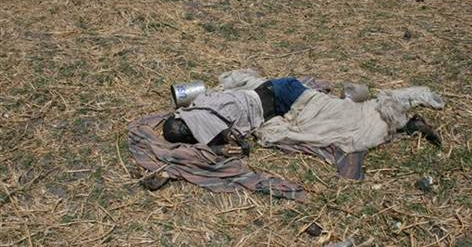 Three IDPs who left the UN base in Juba are believed dead, a witness reports(Photo: file)

May 28, 2015(Nyamilepedia) — Three internally displaced persons, who left the UN Base (POC) in the capital, Juba, last weekend were found dead on Monday morning.

According to an insider in South Sudan Security Service, who declined to be named due to sensitivity of the case, the three IDPs, who were identified to be from Nuer ethnic group, were found dead near the security premises.

“We found them on Monday morning, all dead and dumped near our premises” the insider said.

According to the witness, all the three IDPs are males from the Nuer ethnic group of Unity state.

The reliable source confirmed to Nyamilepedia Press that each of the three deceased sustained multiple gun shots, a report that is yet to be confirmed by the police and other departments.

“They have gunshots all over their bodies. The cause of their dismissal is not clear at this point. They were found dead and were taken to mortuary”  John further said.

According to the controversial security bill that was passed in March, the South Sudan security service has been given authority to search, and arrest without obtaining warrants or reporting to the police department in the country.

The witness believes that one of the three deceased was identified to be a relative of Hon. Magok Rundial, the Speaker of South Sudan national parliament.

South Sudan’s national capital, Juba, accommodates thousands of internally displace persons, who have refused to leave the over crowded UNMISS protection sites due to fear of safety and lack of property to put up in the capital.

Earlier this month, the Secretary General of United Nations agreed to reallocation plan to move the IDPs from the government control territories to rebel held areas due to fear of disease outbreak and safety concerns.

← Former Unity State’s Education Minister calls for Humanitarian Assistance to Affected Communities in Unity State
If You Close Your Eyes To Facts,You Will Learn Through Accidents – The Case of Mundri →

Rome Peace Talks to resume in Kenya on Monday