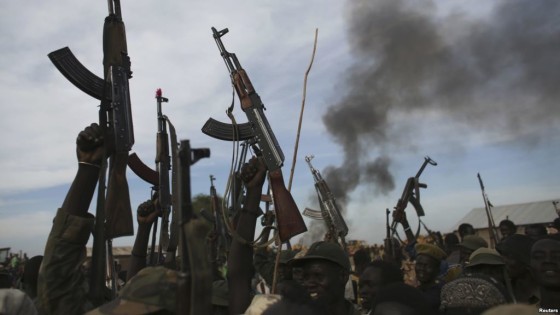 June 02, 2015(Nyamilepedia) — Absolutely South Sudan, the world’s youngest nation, is embroiled in a conflict that began as a political dispute but has been intensified by pre-existing ethnic tensions. The number of casualties and refugees is straining SPLM in government, SPLM in opposition and international humanitarian efforts rapidly.

Hence having contextualized the geo-politics within International System and the political ideology behind the United States involvement indirectly in South Sudan conflict, I would term it as real and absolute interest even though many people sometimes confused by the standing point of US in the ongoing crisis in South Sudan. There has been a lots of agreements signed between the two Countries regarding how to exploits South Sudanese people which the opposition and government of South Sudan officials are not aware about.

The current crisis that has resulted to current civil war among South Sudanese was an objective of President Salva Kiir and his counterpart Museveni of Uganda, the only dictator in the horn of Eastern Africa region. Most of the people are not inform yet about what has been going on between Uganda government, South Sudan and United States but to other who read different foreign policies and how they are applied in International Arena, you will realize that Americans foreign policy is all about tactical exploitations and Uganda as well.

Surely, for your information, the Uganda People Defense Forces (UPDF) might not return back to Uganda soon due to my own judgment unless otherwise if miracles arises from heavenly God of Universe. Most of Uganda troops die in huge numbers within South Sudan territory as well. It will not be easy for Uganda Government to withdraw troops when most of them have departed to heavenly father. Most Ugandans members of Parliament are always calling for withdrawal of their troops and M7 is very quite due to the fact that, he knows if he accept the withdrawal then his people might question him of the missing numbers of troops.

The agreement between Uganda government and South Sudan is what has destroyed the Republic of South Sudan politically, economically and socially.

Hence, the crisis that emerged among the top Sudan People Liberation Movement (SPLM) members in 2013 was not emergency as some people assumed but was strategic work plans for five years that was just fulfill in 2013 December after the party members put accusations on the Chairman of the party Comrade Salva Kiir Mayardit and eventually lead to the massacre of Nuer civilians in Juba intentionally by the Dinka Council of elders and their allies.

The strategy of Nuer Massacre was a design tactics and strategy of diving and get what is good for an interest and all these political manipulations culminated from President M7 and Council of Dinka Elders. Culprits or political sycophants who destroyed Government of South Sudan under Comrade Salva Kiir are all from (Bor County) where Kuol Manyang, Makuei Lueth and elements like Brigadier Malaak Ayuen, Philip Aguer might have come from. All those mentioned personalities are always working for the down fall of President Salva Kiir Mayardit since before Independence of South Sudan in 2011 up to date.

More interestingly, Uganda government deceived Americans by telling them that, sending troops in South Sudan is to control the Genocide and fulfill Humanitarian assistance. Logically what kind of assistance could Uganda people give to South Sudanese?

However, people may have asked what is the interest of United States within South Sudan? The answer is the economic agenda, whereby the Obama administration is trying politically with all momentum for the Unites States oil companies to take the lead in the oil explorations and to control eighty percent (80%) of the economy of South Sudanese indirectly. Are you aware my fellows South Sudanese?

United States foreign policy and foreign aid has been the subject of much debate, praise and criticism both domestically and abroad. Since the crisis of South Sudan emerged in December 2013, most of the United States officials were of the view; the crisis must be end soon. Where is soon they have been talking about? Who is manipulating peace talks? Who is the double dealer within this current crisis? Absolutely, Americans people are in position of achieving something!

The foreign policy of America is all about to exploits other countries unknowingly. Are you informed that a tactical manipulation is what is being use by United States?

The foreign policy of the United States is the way in which it interacts with foreign nations and sets standards of interaction for its organizations, corporations and individual citizens.

The officially stated goals of the foreign policy of the United States, as mentioned in the Foreign Policy Agenda of the U.S. Department of State, are to build and sustain a more democratic, secure, and prosperous world for the benefit of the American people and the international community.

After contextualizing , the theory of United States foreign policy agenda, it is very clear that each and every country globally should benefit Americans people indirectly, politically, economically and socially, whether we like it or not.

Surely, United States of American interest in South Sudan is only economic and because of that, the conflict has taken one year and half where most of Americans divided on who to support from President Kiir side and Dr Machar insurgencies. Well the reason why the ongoing conflict is not yet resolve is due to unwillingness from the both opposition and Government of South Sudan for not signing the deal but in other ward, Obama administration is using a delay tactics as well to make what is called “evaluation mechanism” trying to bring person of their interest in to leadership of South Sudan and all these are based on oil revenues that could benefits United States government through their investment initiatives and oil companies. What a disgrace?

Why United States is not pressuring the two warring parties?

The only reason why the war is still going on and will still escalating further is due to United States and Uganda government.

The administration of President Obama have realized that both Dr Riek Machar and General Salva Kiir might not fulfills their interest in one way or the other and therefore lead to withdrawal of the mechanism that was supposed to be use to bring peace in South Sudan.

The solution for peace is in the hand of international Community and their partners but they have observed both Dr Machar and Comrade Salva Kiir will never fulfill the interest of Americans people. Obama Administration is using President M7 of Uganda as the agent who always initiated the Americans interest and that is why he is in the leadership for decades in Uganda. The Democratization and human rights initiatives of US are just word of attractions and persuasion or rhetoric.

Dr Machar is not willing to fulfill the interests of Obama Administration incase if he comes to power since his ideology is all about , reforms and democracy through consultations of public opinions. Americans People don’t see the benefits that they might get if Dr Machar becomes the leader of South Sudanese. Dr Machar having a British background educationally is an issue as well. There are different assumptions that if he becomes he might fulfill the interest of United Kingdom (UK) mostly then United States interest.

International community as well has been in forefront advocating for G10 SPLM Members but afterward, they have realized that, most of the people within the group are the one who stolen the millions of dollars when they were in the government and they have carryout small consultations and the general public views is very low toward the group.

The Obama administration has not yet identifies the right person to take over from Salva Kiir Administration but identification of who to fulfill the interest of US is becoming another long war that needs good analysis and judgmental mechanism at this time otherwise war will be there for years and years in South Sudan.

The current war of South Sudanese will not end very soon because for International Community to identify their allies within the country will take another two to three years in order for peace to come. Whoever is saying President Kiir and Dr Machar are not willing to bring peace to South Sudan are very wrong.

The problem is with International Community that always organized private meetings among the two groups and whatever they discussed with SPLM in opposition and SPLM in government is totally different.

Different consultations have been going on between Americans Politicians and Government of South Sudan as well Opposition under the Leadership of Dr Riek Machar but they have not agree up to date and that is why no peace talk for almost a month and let it not surprise audiences if coming roundtable talk will not bring peace in the Country.

The SPLM in Government and SPLM in opposition have not yet realized that they have been misled by the international community.

God bless you all!

← G-10: The South Sudan’s Yesterday, Today and Tomorrow’s Problem
Make Nilepet to be Like PETRONAS: An Open Letter to Mr. Joseph Cleto Kuel →