The SPLM/SPLA Leadership posting for a picture after Machar arrives in Nairobi in May 2014(Photo: file)

June 10, 2015(Nyamilepedia) — For once, most of us have read many retaliatory ripostes on the return of SPLM-Uhuru to Juba, and despite the diversity in opinions, most of us applaud the mosaic of what would be multipartism in our next South Sudan. Without doubt, many open-minded South Sudanese intellectuals recommend the responses of Dr. Lam Akol, Dr. Anna Itto and Capt. Mabior Garang on SPLM-Reunification, not necessarily because we all affiliate with the SPLM(s) or aspire its reunification but because we all want peace, and reunification of the South Sudanese people.

The biggest misconception, which was fortunately deciphered by Dr. Lam, is that SPLM-Reunification will bring peace, per se, as it once did thirteen years ago(2002). As most of us are aware, Kiir is convinced, head-to-toe, that he must copy-paste the “charms” of Dr. John Garang to reverse this ill-engineered epidemic man-made crises in order to continue to rule over the dead and the half-living, but all these are just hallucinations, the symptoms, of schizophrenia that is yet to be diagnosed in our dully president.

The 2002 agreement was not just a reunification but a give and take paradigm between two learned politicians, a bright stars’ model, that led to the independent of South Sudan that we all yarn to realize!

In 2002, Dr. Machar gave up amalgamation or equal power sharing in order to inject Self-determination and Democracy into once rigid Unitary and Socialists infiltrated SPLM/A rebels’ movement; hoping that if such visions were successfully inaugurated, then they would sublime the foundation of status quo and many of its elements; which would have opened doors of Equality, Liberty, Freedom of Expression and Speech, Rule of Law, Development and many other Rights and Freedoms that the South Sudanese sacrificed over two millions lives for, and unfortunately, had to sacrifice even more to realize what should have been instituted by July 9th, 2011.

Therefore, the current civil war is due to violation of frameworks of 2002 agreement, and thus Juba should know better that a mere recycling of the 2002 SPLM/A reunification, instead of committing to honest and lasting peace deal, is not only absurd but a waste of time and scarce resources.

Also, the return of SPLM-Uhuru was not to reunite the party but all desperate and despair. Any collaborator would always find a justification to return to the house of the master. What exactly has the G10 achieved or waited for all these months to claim the vision today? In other words, why would it take them so long to “rescue” South Sudan if all that had to be done was to reunite the SPLM party?

If the G10 were the “saviors” of South Sudan, by any chance, they should have rescued it before July 2013 when they had the capacity to enforce their “rescue package” through hooks and crooks when they had powers at their fingertips and not when they are returning as “prodigal sons” from exile where they have been helplessly dumped; otherwise, anything else is just a petty excuse!

Furthermore, the revocation of unconstitutional decrees was never valid to begin with. All the naive decisions passed by the regime are all based on impulses of one man and should never be decorated for how much they have destroyed and continue to devastate to maintain the status quo. President Saliva shot himself in the toe and any quick fix attempts will never last, if any succeeds. 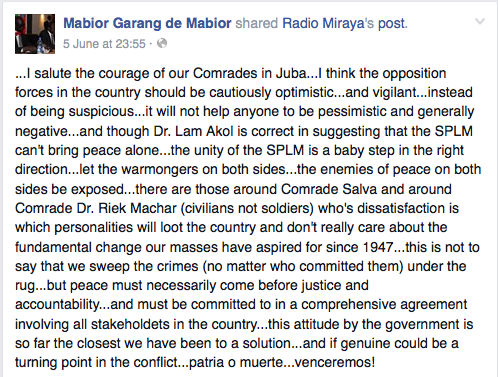 Yes, Mabior’s Facebook status did not please many supporters of IO but this only demonstrates how diverse the opposition is. We understand that there are many components to cheer for in IO but many young fans who flow with the winds of change embrace individuals, communities, fighters or the party itself without putting much emphases on the visions of the movement or any tangible discrepancy between the Opposition and the regime. Such support should never override the overall objectives of the Movement.

To reach the desired destination all these petty interests, strings and suspicions within IO must be extinguished to allow the national cause to diversify, not only within the opposition or other political organizations but to all corners of the country, including the regime’s institutions. This could be complex but the best rule of thumb is that we cannot use the same reasoning that manufactured the crises to solve them, and I will explain:

A few commentators, who rushed to the history of SPLM/A, Garang’s family or records of Dr. John Garang to judge Capt. Mabior are not necessarily intelligence than the rest of us but repeating the same mistakes of the despotted Kiirians and Lul Ruai Koang,​ who rushed to fake records to spiral the problems but later felt victims of their own making. Where is Lul Ruai Koang today yet, like Salva Kiir, he wanted to sound as the prophesied hero that would prevent bad predicaments from repeating themselves? For those of you whom this may sound as a Greek here is what Lul Ruai Koang told Mabior in mid July, 2014:

“The days when one man, his wife and two young sons would come, kill, hijack, own, deny disregard, work tirelessly to distort or try to burry part of history made by fighters before him are long gone and consigned to history books” Lul claims.

For those who groupthink or conform that the movement is for Nuer or Nuer and Equatorians, you must be told that this is a weak philosophical fallacy. Such fallacy is one of the reasons that forced Maj.Gen. Olony, Col. Losubu and many others factions to fight for the same objectives on their own. As witnessed in the recent past, both the SPLA [IO] and REMNASA, claimed responsibility of one ambush on government convoy and all the anti-government supporters welcomed the “victories”. Thus, there is no point to segregate when you need one another!

On the contrary, if the movement was for Nuer, why is it that the armed opposition is battling mostly Nuer(wew) and foreigners in Greater Upper Nile? Yes, there has been an influx of Mathiang Anyor and Gelweng in this devastation but they have never been the focus point. Without Fooljang and Nguen Monytuil, Gelweng cannot spend a night or two in Unity state, and similarly in Renk, Paloch and Bor.

Therefore, it’s completely unrealistic that some members and supporters of the opposition chose to undermine the little efforts of others, yet we all hope for a change that will establish a genuine “one nation, one people” in a “Happy 21-States Federal Democratic Republic of South Sudan” or equivalence. But how will we achieve, build and develop such a state without embracing diversity and ethnicity of everyone under one umbrella now or in the future?

Fighting For Visions To Re-establish the Previous Regimes

When the South Sudanese and their Counterparts fought the wars of liberation, there were high hopes, expectations and dreams that better systems would be established and the country would be developed if the NIF regime is dismantled or once the South gets her independence. Unfortunately that hasn’t been the case in South Sudan, and therefore a second liberation was inevitable; however, the paradox is that a third, fourth or fifth liberation(s), and MAY GOD FORBIDS, would also be reasonable as long as the current mindsets and perceptions are carried forwards to the next generations.

As demonstrated in protest to Mabior’s opinion, none-tolerance, oppression and silencing of differing opinions is in the genes of many South Sudanese people, especially among the major tribes. This trait must not be readopted, especially by the opposition, if we are to transform the country.

Any individuals or groups, who attempt to deprive the cadres or intellectuals, whether in the Opposition(s) or just in our societies, of their rights of speech and entitlement to opinion or expect these individuals to conform or rubber stamp any ideal that we think is “right” is not only opposing the vision of SPLM/SPLA but also committing the same suicide that Kiirians are struggling to survive. This must therefore be loudly condemned!

If Saliva Kiir did not expect his comrades, which he took for subjects, to conform to dictatorial tendencies while trying to impose intimidation, and elimination policies, South Sudan could be developing and prospering today contrary to being held hostage in deadly civil wars, destruction, grave human rights violations and crimes against humanity.

It would be completely outrageous that supporters and cadres of SPLM/SPLA [IO], Mabior included, are falling victims of the same bad systems that they wish to transform!

Having benefited from closed group forums, it’s highly recommended that all the sensitives discussions and problems are managed through these encrypted mediums.  In addition to closed groups’ forums, public briefing, emails and teleconferencing are many other alternatives that should be exploited for public interest. Captain Mabior and other elites, who speak for their organizations, should utilize these inner structures to avoid misinterpretations and unnecessary media outrage.

Above all, the take home message is that many a time we may embrace something (or someone) so dearly that in the course of preserving or protecting, we may end up unintentionally hurting, killing or destroying what we should instead have cherished to last. Our definite strength is in our unity in diversity and hard work!!

The author of this OPINION article can be reached for comments on this article or any other opinion articles at dengsimon 2000 at yahoo dot com.

← Another Government Official Killed In Unity State!
How Many Cars Has Kiir fueled With Nuer Blood in Juba? →

20 comments for “The Public Outcry On Mabior’s Opinion and The Untold Predicaments!”