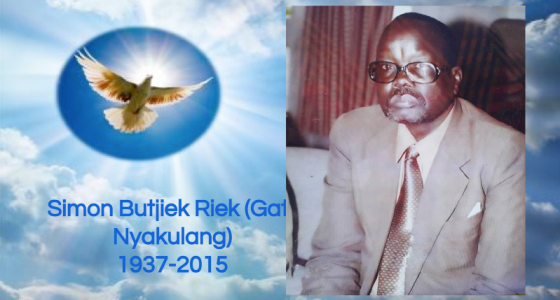 June 13, 2015(Nyamilepedia) — SIMON BUTJIEK RIEK MOCK, who passed away on Friday, June 5th, 2015, is survived by five wives. Three alice and two passed away: Teresa Nyareka Chak ( 65 Years old), Mary Nyatuak Jal ( passed away in April 14, 2010), Nyarout Goul, Nyawech Ruach (From Pangak), Nyalual Guol Chai ( From Lou Nuer-Cieng Tiang), Zenab Hamad (from Nuba Mountain),Banah Dayiem (From Jikany of Guit County. He survived with 12 children, nine boys (9) and three girls (3) and a host of grand- children, nephews, nieces, cousins and their host of grand-children not only in Lich State but across South Sudan and in Diaspora. His mother Nayleetni Kulang Ket and father Riek Mock Wijang had 13 children, eight boys and five girls.

Funeral was held on Monday June 8th, 10:30 a.m. at Khartoum Christian National Cemetery after prayer service at Presbyterian Church of Sudan in Khartoum. All family, friends and community leaders/dignitaries were received for comforting and encouragement at his residence in Al-azhary residential area in Khartoum for the three official morning days.

Gat-Riek life memorial prayer service was concluded this past Thursday, June 11th, 2015 from 4:00pm – 7:30pm at his residence in Tongpiny in Juba, South Sudan and was attended by family members, friends and senior officials and dignitaries including his relative Manasseh Magok, the Speaker of the national assembly in Juba.

The memorial service in Khartoum was well attended in his residence where he passed away in Al-Azhary in Khartoum Sudan and in Nairobi, Kenya. In attendance were family members, friends, and senior officials from the SPLM/A-Resistant Movement and other senior government officials, church leaders and colleagues in business sector.

His daughter Rebecca Nyakuma (Joseph Madak Wuol wife) and family supported and comforted by the wider community has celebrated Gat-Riek life in a memorial service this Sunday, June 14th 2015 and the same has been attended by host of all family members, close relatives and friends most of whom are dignitaries from different churches and community background in Ontario, Canada.

Simon Butjiek Riek, age 78 of Koch County (Jidiit-Jagei), Lich State went to be with his Lord and Savior on Saturday, June 5th, 2015.following a heart attack caused by heightened blood pressure due to the recently reported attacks on his Koch County resulting in a brutal killing of many of his close relatives and other civilians in the villages across Unity State by government militias and its armed forces in the end of May 2015.

Gat-riek is a veteran politician in early 1970s and has spent his later life as a prosperous businessman before and after the independence of South Sudan in Juba, Malakal and Unity State. Until his last moment of his life, Gat-Riek has been vocal and firm advocate of justice, equality and democracy and it was why he sought protection at the UNMISS camp in Juba when Nuer Massacre happened in December 15, 2013 until his children in Diaspora relocated him for safety reasons to Khartoum.

Gat-Riek passionate love goes beyond his family and he is well known of determination in his convictions throughout his life-time. He fully through his support for the SPLAM/A Resistant Movement led by Dr, Riek Machar Teny for a regime change for justice and accountability against the massacre of Nuer and for bringing about a just and a democratic South Sudan for service delivery most needed by its people. He was a personal adviser to the former Vice President and the leader of the SPLM/IA-IO until his time of passing away. He participated as an elder in the Pagak-1 Consultative Conference in October 2014 in pursuit of a peaceful end to the ongoing carnage in South Sudan since December 15th, 2015. Simon Butjiek legacy will continue in memory of all South Sudanese, especially his family, friends, colleagues and age-mate.
God Rest his Soul in Peace.