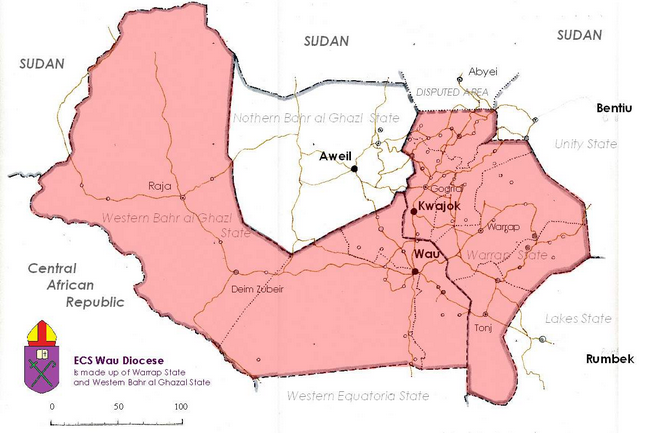 Mapp Via ECS, Dioces Of Wau…

June 21, 2015(Nyamilepedia) — Warrap parliamentarians are corrupt in believing eyes, is the fast dissolving from a majestic and honorable place which presides over the just government of us “settled MPs” all into a seedy swamp full of grasping, greedy title fellows hawking the public interest to the highest bidder without a thought for the needs in civilized societary, forgetting the distress in the state under corrupt woman and seeking for shamelessly enrich themselves by throwing the state under the bus.

Unfortunately, mps are corrupt and broken. The oversight function and perhaps even the legislative ones as well, have been sold for bribes to reelect Nyandeng for their selfishness, greed and corrupt. Therefore, the mps are polithieves who couldn’t think of starving citizens. Indeed, Nyandeng bought power from food lovers’ mps. Corruption is worst than murdering because it kills many people. Why our parliament is practicing political corruption.

Parliament is citizens’ voice, its action decision are for securing the citizens’ lives but Warrap parliament is for securing mps stomach and investment for their families.  This parliament has worsened the situation in the state by selling right of the people to their interest. What corrupt MPs have done is to steal and auction the will and right of the people. They have betrayed the lives of citizens to corrupt governor whose vision is polithieving.

Warrap’s parliament becomes a parliament of fools and cowards MPs who work for their beneficiaries. We are not stupid as our state MPs seem to assume. People one day will prove to them that they are sick, tired, ashamed, disillusioned, and angry and insecurity about multi-corruption that rises in every corner of Warrap.

Therefore, masterminded MPs from different constituency however they have become the master thieves who end up millions of dollar in few selfish individuals’ pockets. They are ready to sacrifice the welfare of the people at the altar for self- enrichment. The MPs of Warrap state are both businessmen and politicians. They are working for their benefits and lacking any desirable direction for development.

Shamelessly, the regime is encouraging looting, bribery and lacking accountability. It is responsibility of citizens in this state to ensure that this regime has poor leaderships.  I realize that most of the MPs go to politics to restrain poverty in their houses. It is not easy to identify corrupt MPs, there a bunch of thieves.

Mps have culture where their societies admire and respect wealth they have without questioning where they got wealth. They have added poor systematic socialization process for stealing public services in their pockets. They are all lacking effective governance and skills of good leader.

The mps are old, sleeping in the parliament and asking for breakfast in office. They are looking for pocket money. They have expensive cars which consumed two jar-cans of fuel daily while poor are failing to afford break in Warrap. There is no raising the voice of citizens in the state level.

No one is seeing or considering the suffering of ordinary citizens, the governor was given 350 million dollars by national government but the money was kept is personal’s account, it seems governor was born corrupt from her birth day and she met mps with the same heart who want to build their families. They all think of themselves and forgetting those they represent.

Remember, whatever you do, work heartily as for God not for men and make you will receive a curse or bless. All they bad think you did for people of Warrap will result to curse in the Day of Judgment. The wrong doers like you will be paid the same they did. It is abomination for government to act evilly to the citizens.

Conclusion: we don’t want our children to go through the suffering that citizens are going through ever day in this state. This is the right time to stop deprave. We cannot stop perversion if we don’t sermon the act of corruptibility leave the state from egotistic parliamentarians.  We trade our greed, selfishness, and bribery cultures and adopt protecting culture from the thieves to sustain the good future to the citizen. This is the time to write bible of corruption and poor governance in Warrap state that this people murdering thousands of people from Warrap state. I have lived in this state for long since 2006 to 2014; I know exactly what has been going on and what is going on currently.

Ajang Malueth Ajang Nhial is a south Sudanese pursuing concurrent degrees at different Universities in Kampala, bachelor of International Relations and Diplomatic Studies at Cavendish University and bachelor of Accounting and finance at Saint Lawrence University. Uganda    He can be reached at ajangmajang@gmail.com , +25679995330/+256786364488

Nyamilepdeia reserves the right to moderate, publish or delete a post without warning or consultation with the author(s). To publish your article, contact our editorial team at nyamilepedia@gmail.com.