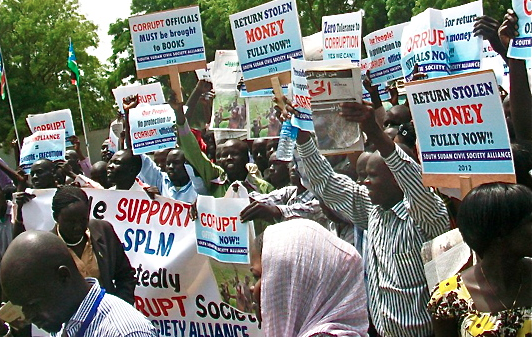 Members of the South Sudan Civil Society Alliance demonstrate at the National Assembly in Juba, June 11 …

July 17, 2015(Nyamilepedia) — South Sudan is bless to have potential and capable leaders who have visions and missions to accomplish since the country known as Sudan existed before and after being granted her independence in January 1st 1956 by the British.

When the Kawajat left the old Sudan at the eve of independence, the people of Southern Sudan placed their demands to be given the self autonomous region which comprises of the three regions of Bhar el Ghazel, Equatoria and Upper Nile coinciding with  primary and secondary objective of the Anyanya  movement in the bush as forth front demand  in case they reached on any deal with the Sudan government and indeed the self-governing region was given after the Addis Ababa agreement, the regional government was formed but marred by rampant corruption and embezzlement of the public funds by the individuals who wanted to enrich themselves with the state money however the government of Comrade Joseph Lagu Yanga and Abel Alier Kuany never prosecuted any perpetrator for practiced the vices neither setting up strong institutions to fight sleaze yet they have all machineries and opportunities to apprehended whoever involved in practice of the evil .

The simple reason one might attributed to the failure of two comrades to bring the doers on board for charging was too much empathy and compromises due to the fact that they were close relatives, comrades in army and friends but sabotaged their government in order to be portrayed in the eyes of Sudanese and international community as corrupt entity which could not differentiate between the public funds and the personal assets.

The same scenario repeated itself after the signing of Comprehensive Peace Agreement or the( CPA) in 2005 when the self-ruling for the South was approved and implement immediately in the South with the ten States  governed by the  Sudan People Liberation Movement(SPLM) the only party in charge of the Southern affairs under president Salva Kiir Mayardit and his vice Dr. Riek Machar Teny although they were in partnership with National Congress Party of the North as per the CPA, in the accord, there were  protocols such as wealth sharing  in the agreement that granted the parties at peace to have 50% shares of the  resources in the country to be used in the affected areas for rejuvenation of roads, hospitals, schools ,agricultural schemes to eradicate poverty and electricity and in our dismay as citizens of South Sudan, we came to realized that the SPLM party with its few elites who claimed to owned us have ransacked, looted, and squandering the wealth in order to meet their personal  goals for instance the SPLM classes have purchased cars known as V8,bought houses in the most expensive estates such as Muyenga, Munyonyo and Entebbe in Uganda and other parts of the world leaving the gap between them and poor South Sudanese wider.

They have stolen  4 Billion US dollars from difference institutions yet they said that wasn’t enough they are continuing with the theft for instance the recent scandal that involved some officials in the presidential  palace is an indication that our government is unable to account for individual who corrupted  , how does one expect the fraud to be fought yet the comrades practiced the broad daily light game without hesitation, the SPLM set up poor and toothless institution and employed  comrades and relatives who have no academic qualification to fight the scam ,they call their relatives and friends from wherever they are to come and work as personal secretary, private secretary, office manager ,massager and so in order to build their bellies, buying V8 with the money that has got no accountability, imagine South Sudan is bless to have resources that generate 4.5 billion US dollars  monthly with its population estimated to be 12 million people which is far less than the money we received a month.

How do we put to an end all these messes being placed on us by our leaders/brothers, do we blame the SPLM for established poor institutions and employed the wrong people in the right places or do we finger pointing at the donors for pledging the assistance and giving to hungry lions in the SPLM den but all in all we have to question our patriotism and as to why we put the country under the York of thugs and crooks who think of their stomach rather than the citizens in the country.

In conclusion, South Sudanese need to pay much attention on the corruption before the wrongs cripple and deflating off the country resources, let us exerting efforts to eliminate the practices by setting up institutions such as anti-corruption commission and empower it with absolute mandate to fight against the swindle. We shouldn’t focus only on war and leave the proximate enemy that has existed since shortly after the formation of autonomous government of Southern Sudan in 2005.The fight has to be collective in order to rescue our beautiful country from these self centered politicians of SPLM.

The opinion is solely responsible for the writer and the role of the media is to disseminate to the public for consumption. The author is a student of Mass Communication at Kampala University and he can be reach on the mail at Makoy.kuong@yahoo.com.

FULL TEXT: The Speech of President Salva Kiir Mayardit during the graduation of the first batch of the Necessary Unified Forces of the Republic of South Sudan, Tuesday 30th August, 2022, Juba, South Sudan.

Opinion: The graduation of the First batch of the Necessary Unified Forces of the Republic of South Sudan is an indication parties to Revitalized Peace Agreement are making progress in implementing the agreement fully

Opinion: What’s next after the meagre Graduation of the Unified Forces?

President Kiir pleads to NUF to obey him, not Riek Machar or their tribesmen!

Opinion: Corruption in Nilepet, Why the Current Managing Director of Nilepet is a Hyena in the Sheep’s Cloth