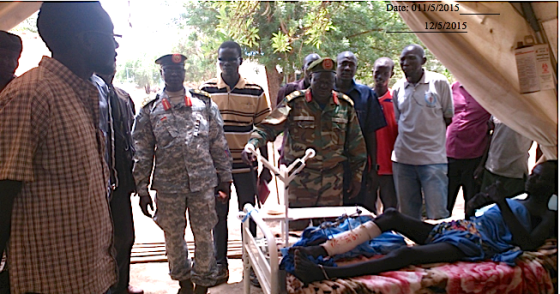 July 24, 2015(Nyamilepedia) — Some people on social media still not getting it right that the recently relieve of Major Gen Peter Gatdet Yaka from the position of deputy general chief of staff for operation, and Major Gen Gathoth Gatkuoth Hothnyang as deputy general chief of staff for Logistics is one of the power bested upon him the C-in-C Dr Riek Machar Teny Dhurgon.

Though many creditable sources such as the National Chair Committee for Information and Media Cde Captain Mabiore Garang De’Maboir and Press Secretary to the Chairman Cde James Gatdet Dak Lampuar have cleared the dust and mist that the process is a normal practices yet anti-elements of SPLM/A-IO, and other bought out Nuer-WEW of Salva Kiir whose analogy configuration in politics is lame are pouring out poisonous venoms to the Movement hoping this would help them achieve the Movement’s destruction or split. Common people how many times do we need history to repeat itself?

One of the old tales goes: “Once upon a time god was living very close to the earth from the sky and reaching him for complains was so easy. For example when the weather is hot mankind would just called him and complained to change the temperature to cold, and when it’s cold they would also called him and demanded to make it warm. With small sickness also they would called him to heal it. Until this nonsensical complains caught the attention of fox who later advised god to go and hide himself further in the clouds so this mankind problems cannot reach him in this fast face interval, and so did the god”.

Prior to the appointment of the relieved Generals there was neither public consultation from the chairman nor had he seek pinions from individuals, and none of the media propagandists convinced Dr Machar for their appointments to the above said positions. As well, none of the communities whom the Generals hail from pressured Dr Machar to appoint their sons. Indeed, it was the chairman’s self satisfaction that his Generals would do a better job to services in the discussed ranks. A reasonable person would also use logic that it’s the same C-in-C that can relieve and reappoint them accordingly. So what is peculiar about it now? In another term these positions are military vacancies and are non civilians’ positions so its occupants need no civilian reaction or consultation unless we call black a white!

Why the C-in-C should betrayed and removed Peter Gatdet and Gathoth Gatkuoth while they were the very Generals who happened to get the knife off his neck when Salva was almost to behead him? If the case is about ICC as Paul Thorgow assumed, then why appointed Gen James Koang Chuol who is also sanctioned by the US and Europeans Unions, and what is different of the two men from the services they have been providing within SPLM-IO Movement? The problem is when people subject themselves to emotional drive mechanism lead to nowhere but shooting their own foot.

Late world Icon Nelson Mandela once said to his people when they felt that he was not arming them to their teeth to fight Apartheid; “International warfare is more dangerous than the guerrilla warfare as well as dangerous than hovering sound of B-52 Bomb”. SPLM-IO has defeated Salva Kiir diplomatically together with his best alliance Yori Musaveni of Uganda and it’s a matter of August/2015 for him to heed the international voice or face the reality of his wick deeds.

That is why some days ago the Juba regime accused Kenya of siding with rebels and more accusations are on the way coming from the dead Juba government. And it’s by realizing the truth that motivated likes….of Gordon Buay Mayerdiit to plant this illusion and ill plan to divide the SPLM-IO Movement barking day and night that the relieve of both Generals will cause a splinter within the SPLM-IO ranks.

Gordon Buay with his network knows for sure the C-in-C was going to relieve some of his Generals and seized this opportunity in an advance, twisted and fabricated it to the social media in a language that caught the feeling of low IQ individuals as well as general public attention. Again, who does not know Buay as one of the leeches lives by sucking Nuer blood? And how mindful are we to listen to the voices of these bought out brothers/sisters in Juba?

This bought out Nuer-WEW know very well that signing this August/2015 peace agreement would not favor their interests and their master Kiir as they denounced this power sharing formula some weeks ago. As a result they aim for something that can cause rifts within SPLM-IO for them to survive. But shame on them not this time around; SPLM-IO under the able leadership of H.E Dr Riek Machar Teny Dhurgon is united than ever!!!

Conclusion: Dr Riek Machar Teny Dhurgon makes it clearly that Salva is illegitimate since July/9th/2015 and this is the moment we have been patiently waiting. It is up to this August and international community to determine whether South Sudan will be in harsh or Salva Kiir must heed to the reality. And wondered why we are so impatient!!!!!!!!!

← Laws in White House are Not Applicable Everywhere, Susan Rice MUST Know This.
The Resurrection of GRECOR →

Government to send SSPDF to curb insecurity in Abyei.