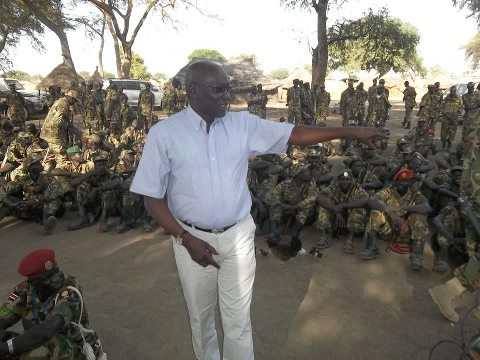 Gen. Malong, who is a ruthless dictator and heartless killer, declared a new war against USA and said that from now on they will be more brutal as a terror organization than Al Shabaab and Boko Haram.

He said in Juba that he will be a rebel but more than a rebel, he will follow the steps of ISIS, Taliban, Boko Haram and Al-Qaida.

“I better be a rebel…. You should know that those who are in Al-Qaida, Taliban, Isil, Boko Haram, Alshabab …. they are human being like us, therefore we should follow their foot-steps than signing that fake peace” said Gen.Paul Malong, who is president Kiir’s army chief.

We also know that Dinka Haram has been acting like Boko Haram and ISIS but we thought that the regime will bring peace but we  were wrong, no Terror Organization brings peace.

Dinka Haram has been abducting children, boys and girls and murder innocent civilians in South Sudan but because everything is wrong in this young country no body cares. Killing under Dinka Haram has been a business as usual. In December 2013, they killed and even roast the flesh of human beings from their Nuer victims within the national city.

Only this year that the United Kingdom and United Nations started realizing that this is not a government but Dinka Haram. The Prime Minister Gordon Brown of UK was the first diplomat to call Juba generals a bunch of warlords and link their behavior of abducting children and women to terror organizations. They also killed IDPs under the protection of UN in Bor town in April 2014, in Juba and Malakal.

Malong still terrorizes Northern Bhar el Ghazal where he was once a governor before he was brought to head the Dinka Haram militias in 2014 in Juba. He has killed many civilians in Juba and Unity State. But his ruthlessness is now known by the international community and sooner or later he will face the International Criminal Court (ICC).

Malong is now on the black-list for war crimes and crimes against humanity. This was pronounced last week by the Human Right Watch after warlords in Dinka Haram committed war crimes in Unity State. Malong is also in the AU Crime report and he is known as the one who trained Gelweng in Juba and used them to kill Nuer civilians in Juba in December 2013.

The world lacks evidence in form of videos but what Dinka Haram does in South Sudan cannot be compared to Boko Haram in Nigeria and Al Shabab in Somalia.

Many terror organizations in the world do not have enough military resources but Dinka Haram has plenty of weapons of mass destruction from Uganda and else where. They can erase a village in a few hours and kill many children and rape elderly women.

Compared to Boko Haram, Dinka Haram has killed nearly 100, 000 people in South Sudan in two years. They have institutionalized corruption, tribalism and haramism in the country and loot resources on large scale.

Dinka Haram is made up of militias from Dinka, Nuer and Murle Tribe. They have militia from Sudan, Congo, Rwanda and Uganda. Their militias are known as Cobra-J, SSLA, JEM, SPLA-N, UPDF, M23, Gelweng and Dutkubeny. The last two militias (Gelweng and Dotkubeny) combined are know as Tiger and are responsible to protect cattle and cowboy, Salva Kiir.

Some of the other militias kill civilians in the name of defending oil fields and cattle in Upper Nile and Unity State. Other militias fight regionally in Somalia, Congo and Sudan. So Dinka Haram is more of a regional Terror Organization. They can rule a weak country like South Sudan through tribal politic for many years but killing and more death will continue.

If the United State do nothing about this new Terror Organization, Dinka Haram could be worst than ISIS and other Al-Qaeda organizations. Because of Dinka-Haram, Al Qaeda will find its ways to South Sudan to launch attack on the American Embassies in the region.

America must sanction and declare war on Dinka Haram before it takes over the region. More so, US must evacuate their workers in South Sudan until the war against Dinka Haram is won. This is for your information, don’t say the Chief of Dinka Haram, Paul Malong, did not warn you.

The author is a concern American-South Sudanese, who holds master degree in Counter Terrorism from a top University in the United State. You can reach me at tikyuakT@gmail.com