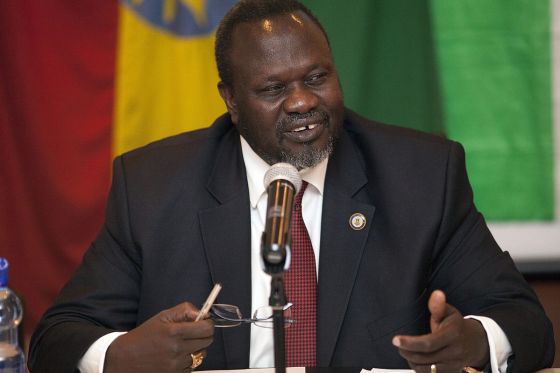 August 11, 2015(Nyamilepedia) — Some South Sudanese are sick of fallacy, stereotypes, and prejudices. As the result of this intellectual sicknesses, they are blind to see white as black, all their differences created  this mess, unwanted war between south Sudanese to be submissive to brutalities and lack of confidentialities among this groups despite the long co-existent between Dinka,shilluk and Naath.(Nuer) The ecological of south Sudan it can tell us that these types of co-existent it has a long history not easy to predict but from the truth its easy to claim itself

The truth is that they  don’t want to hear it  that  Dr.Riek Machar Teny  can deserves to be called as the ‘’Symbol of Liberation’’  .if you  touch it you stirred up the flame of the fire instead putting it of and  because of  this  , you will be called as  “ arrogant” because the truth which look like touching of the eye-ball of another person which is always hard to occurred. the truth difficult to accept only by lowly ones and pity hearted ones .

From nature, Dr.Riek Machar Teny is  a good man. Whose primary work is to unite these scattered groups to under one umbrella that’s called South Sudan oppose to the rest of other politicians in the region who seek to have their jars fill from every South Sudan oil well except from natural well of pure water which they preferred for the lowly and poor ones. To fetch their from.

However, when you are opposing what is right it means that you are always sanctifying yourself for your delightful wish and self interests rather than being in the position of dying for many to have happy lives

In 1983, the enemies of liberation struggle created this a myth,’’Dinka was born to rule and Nuer was born to die in front line’’ .  This created caused division among the SPLM/A struggle   but  Dr Riek Machar  stood up to help his people from such dead myth or trail of death 1991 through self determination as the banner for south Sudan conflict he form.

In reality, Dr.Riek Machar contributed to 90%   for South Sudan to be rank number 191 in the united nation in 2011  through him we had pure lives but when the myth start to reoccurred 2013 it has contributed to 99% of the outcry of the people of south Sudan instead of enhancement, settlement to the better and good  to create meaningful future to this helpless region which has what the entire of the world wish to possess.

When the visionary leader has what the people want, we must be proud of him/her since we are all after meaningful life where every family will have enough food on their table, water and  constant electric in every corner of the region instead camping in their on “land whatever you called it”. in the reality the regime has no support all the people had already deserted from it and distance themselves  due to it meaningless and more painful to them they left with no choice instead blurted their anger and picked the guns and liberate themselves from that “wild-beast” regime which has no mercy on it own people.

How can the people be haughty of that regime? since it has loss it legitimacy in the air and earth beside any person who become manslaughter have no future even in the  heaven which is the “throne of the true God” on this account people must now understand who is the problem maker between the two rivals Kiir and Dr. Riek with no impunity as a citizen,  without machar SPLM/A would  have not succeeded under John Garang as we have seen with the  independence of South Sudan  today ,  because majority of SPLA soldiers were fighting for self-determination through machar ideology

However , as the result of  misunderstanding today we have to accept this fatal politics beside when Nuer joint army they did it to liberate everyone to desirable life’s he/she wanted. never  think that they joint to have their pocket fill. it was within their heart to bring us out from Khartoum regime to the betterment place now its time for us to stand firm with him for restoration of the vision. since the master still a live we have to rally on him

As a leader you ought to create an opportunities to the youth which will meet their careers this definitely will help the maker in the future. For- instant having different alternative choices is better than none. when I grew up in South Sudan and  pass through every kinds of bad and good but only the category f bad is the one I used to fall in just because of the injustice that people of South Sudan faces day and night that is why many of them have made  bold decision to take up guns under enable leadership of Dr. Riek Machar who in turn will repay them with internal peace and prosperity against the regime which by themselves they were prouding for as the answer to their questions against Islamic rule in Khartoum from the milestone of the Sudan 91956)till 2011 when south break-away from it mother which is Sudan

For me as Ssouth Sudanese concern I understand one things in life which I will never  and ever forget which is the caring and the hospitality which Dr. Riek shown to us as well as the world at large. Moreover, when Mr. president decided to killed his own people in the base on ethnicity on category of Nuer people through his private army to cleans the city from Naath ethnic group when the news spreaded to the region within the couples of minutes every Nuer has to take up guns avenge his dear ones who he/she lost in that cold blood war, roost of human right and genocide is that the regime that we can still standing for has the way to all ours suffering and needs I doubt ? Its your time as south Sudanese citizen to reclaim all your right back  from that in-just governing

South Sudan children love Dr.Riek Machar second to their “creator” due what is known as  know them from your father and mother his vision has been in calculated into heart of every south Sudanese citizens for decade of years  from young to hold  even Mr. president mention something very important when he was addressing public he said that every one like saying when will president die? From young, hold and street children. That is the sign of not being a good leader to them people now must start to choose the good leaders not on the base of ethnicity but it has to base on the leadership qualities and competencies what the  person is capable of doing and demonstrate accordingly to the leadership personalities.

Where in Africa a developing country is allowing prostitutes to be applied legally? Of course the answer is no except South Sudan as well as the sovereignty of it is handed over to the mercenaries to maintain the regime in the power for more years to come, but in the world there is  no stress with no limitation it can causes many calamities but the time will come for it to end however, when there is consensus agreement between the political elites of the region kind of memorandum can be recreated  which will help for the better settlement in the dispute areas

Moreover, I can repeat myself that Dr. Riek Machar is the living symbol of the liberation struggle and foregleam for south Sudan future. For that he has to be respected and be praise. Due to what he has demonstrated, beside reform agenda always reject by the false and wealth pursuers politicians.

also Dr.Riek machar has taught us on how to deal with every kinds of situations by taking us through all the conflict resolution tools such as

Each of this has the solution to this conflict, yet the regime is not in good mode to choose the one that fit it own style of leadership negotiation, the charisma leader (Dr.Riek) has used each of these to bring this unwanted war, brutal conflict to an end by all means yet Juba still applying the deadly ideology” Dinka born to rules”

For  that reason Dr. Riek Has to be the symbol of foregleam to this  purify nation. here these are the some of the fails leaders who love wealth much than their own people their thank giving were only to bullets people and later each of them die in exiles.

President Obote was the one who declared Uganda Independence from Britain in 1963 ,  but he was overthrew from power and died in exile.

President Nkrumah was the one who declared Ghana Independence, Liberia president who has been sentenced “life in president” and so on   too had gone. the same to any leader who does not listen to his people must too be impose to leave in exile or face charges of his crimes

The concern author is a south Sudanese citizen living in Kenya. He can be reach through this Email at mottoyach@gmail.com

← The Future Leadership in South Sudan
Analysis: Jesus Separated the Church From the State →

1 comment for “Personal Observation: Dr.Rek Machar Teny Dhurgon Has To Be Praised For His Just.”