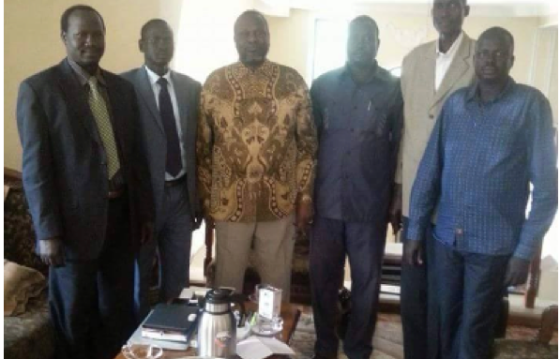 August 17, 2015(Nyamilepedia) — The Nuer Peace Committee of the Nuer community in Canada and United States of America had called an Extraordinary Telephone Conference Meeting (EEM) on Friday, August 14, 2015 to brief the general public about the ongoing initiative between SPLM/A-IO’s Chairman Dr. Riek Machar and his generals. At first, the Nuer Peace Committee would like to thank the Chairman, Dr. Riek Machar for his unwavering support to our team to consults with Maj. Gen. Peter Gatdet and Maj. Gen. Gathoth Gatkuoth for this dialogue to brings about peace within the movement.

The Nuer Peace Committee is an initiative of individuals within the Nuer community and its mission is to provide Foster dialogue, esteem, understanding and promoting peaceful coexistence at this time. The Nuer Peace Committee has been organizing Telephone-Conferencing calls events promoting peace, tolerance and dialogue through community dialogues that work under its Nuer Community. Nuer Peace Committee has understanding that peace is a dynamic process which requires both short-term responses to address the immediate needs of the communities impacted by the current SPLM/A-IO’s misunderstanding and a long term vision to establish sustainable peace within SPLM/A-IO.

We also brief the community about willingness from both side to sit down and results the differences within the movement.

Message from Maj. Gen. Peter Gatdet Yakah and Maj. Gen. Gathoth Gatkuoth to Juba regime is that STOP USING OUR NAMES AND OUR INTERNAL ISSUES, WE ARE NOT GOING TO JUBA.

We also thank general Peter Gatdet and Gathoth Gatkuoth for their condemnation to Juba’s regime to stop using their name in refusing to sign peace with IO.

The community agrees that, it requires little analysis, and almost no sophistication, to recognize that security and peace have to do with the safeguarding of interests of the Nuer people and the people of South Sudan. In the language of the powerful, the pursuit of security is called peace.

As result, the Nuer community agrees that the peace initiative and the dialogues must continue and called on Generals, Peter Gatdet and Gathoth Gatkuoth to accept the call by the Chairman, Dr. Riek Machar to returns to your duties as SPLM/A IO commanders.

The Chairman of the committee

The spokesman of the Committee