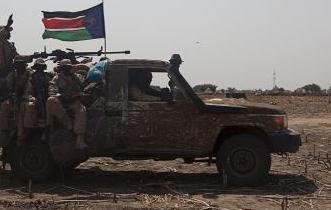 SPLA soldiers drive to the frontline at Mathiang from their military base in Bor, South Sudan, January 26, 2014. The government and rebels in South Sudan traded accusations on Saturday of breaking a ceasefire deal supposed to calm violence that has driven half a million people from their homes. Picture taken January 26, 2014. REUTERS/George Philipas (SOUTH SUDAN – Tags: CIVIL UNREST POLITICS CRIME LAW)

Oct 15, 2015(Nyamilepedia) — It is most enigmatic to the rest of the world to see the newest state wage a war of annihilation with itself after only two years of independence, adulation and colossal external support from friends and the international communities in the lead up to the creation of the new nation in 2011. The destruction brought forth by the ongoing conflict is too severe and its undesirable effect had overwhelmed the region and African continent more than local citizens. The international community pledged and contributed resources to stimulate the spirit of peaceful conflict resolution, through negotiations mediated by Inter-Governmental Authority for Development (IGAD) with an end desire to see the new nation tasting the fruits of freedom of democracy, stability and security like others nations.

South Sudan’s independence was short-lived and the big aspirations and hopes of the people were dashed and never allowed to see the light of the day as the kleptocratic minority who hijacked the power in Juba were in fact busy and planning to replicate the rejected ‘marginalization’ and ‘domination’ policies of Khartoum. Instead of designing programs and legislates laws to repair the socio-economic hangovers of the civil war, the morally and politically bankrupt regime in Juba went berserk and in a predictable fashion, culminated with the patriarch issuing a Presidency Order to establish more states.

This preposterous decision is not only violates the recently signed peace agreement; but it is well-designed plan and calculated Machiavellian manoeuvre to hang on to power at all cost. It has nothing to do with federalism, devolution of power and regrettably, very remote from Dr. John Garang’s ambitious and grand dream of ‘taking towns to villages’. Considering the current political, economic and social situation in the country. It is unconceivable to imagine such a divisive decision should occurred at this period of time, and would bring us to the forefront to question ourselves, what is the motive behind this unpopular decision?. Do we really need more states in South Sudan more than existed ones? To answer the questions, it is imperative and necessary to supernaturally reconnoitre South Sudan’s difficult-to-identified developmental priorities. The 21 years civil war devastated the entire country’s meagre infrastructure, to be exact, there is nothing in South Sudan in terms of roads, hospitals, schools, and please keeps adding.

To be honest, South Sudan is not ready to have more than ten states and the creation of 28 states has nothing than adding fuel on the fire. For instance, since the declaration of 28 states it had claimed more lives at short time in the areas that were under controlled by government. This by itself is an indication that the government bare policy of 28 states is unworkable. Therefore, the creation of the so-called 28 states should be contemplated as merely an act of unsuccessful attempt by a distraught government to distract the implementation of peace agreement rather than taking towns to people. What haul the country backward is obviously clear to everyone; it is embodied in the weak institutions, lack of law enforcement, corruption, lack of sharing resources and many others. For example, the financial documents reviewed by Radio Tamazuj on 28th March 2015 reported that, the President Salva Kiir’s office spend more money than the budget of his own home state Warrap or even exceed the budget of the entire government of Central Equatoria State. Imagine, if the President’s office spends more money than state budget, while the country is underinvesting in infrastructure, then it should be account that the president himself is involved and engaged in financial irregularities, and shortfalls in delivering basic services to the entire country.

In content with less discourse, the creation of 28 states is more problematic and means more corruptions as the country motionless on borrowing mode. For this case, many questions may arise, such as, from what sources the government will generate more revenues to budget for 28 states (governors and ministers) while the oil production output has been reduced and some oil fields are damaged by conflict? How the government would be able to collect non-oil revenues while the roads across the country remained inaccessible and ordinary people are impotent to take their goods to the market? What motivated the government to focus on expansion of the states, not infrastructure? How the reconciliations between communities will work, while government divided the communities according to their ethnicities? And many more questions. If you take a glimpse of this, then you could agree with me that the creation of 28 states is a partake of the shortfall of delivering basic services to the entire citizen and should be account as delay stratagem of the peace agreement by government.

Finally, the creation of 28 states mean pouring money on wrong people pockets or drive the country backward as many people may not think. Take for instance, if these 28 states governors and ministers appointed tomorrow, what they would do first is to use their states budgets to buy houses in foreign countries or taking their children to study in neighbouring countries rather than delivering the required basic service to the people residing in rural areas. Also, the creation of 28 states will make reconciliations between communities more complicated and complex, because currently each community was given a state based on their alliance during the war either with government or with opposition. For example, the Pigi County in Jonglei state was added to the four Dinka’s countries in Upper Nile state, simple because they fought together during the war, and the four Jikany countries in Upper Nile state were given a state because the fought together and list can go on.

The question would be how the reconciliation will be effective, while the communities were divided according to their political aspiration? I think the fruit of the creation of 28 states will be unstable or high tension between communities or states, with narrow gap of reconciliations. If the government have enough budgets for 18 states, why not use the surplus to build better local schools and hospital so that the children of government’s staff will not be studying abroad or the citizens will not travel to seek medical treatment in other countries rather than planting parasite virus among the communities.

I think it would be wise for the government of South Sudan to revise its decision and emends the 28 states issues in order to secure the implementation of the peace agreement. South Sudan is one community and our goal is to build a nation that will be competitive, innovative, manageable, and secure and prosper. I should add my voice to the people who suggested that the government should make a workable plan of pouring money into the projects such as building of national schools, hospitals, roads across the country and promoting or supporting local business people effectively to improve their own business and have capacity to control the market rather than foreigners. I believe the above mentioned factors are the basis for services that are urgently needed by people of South Sudan rather than creating 28 states that have insufficient budget

The author can be reached at gatkuothchol@yahoo.com.au