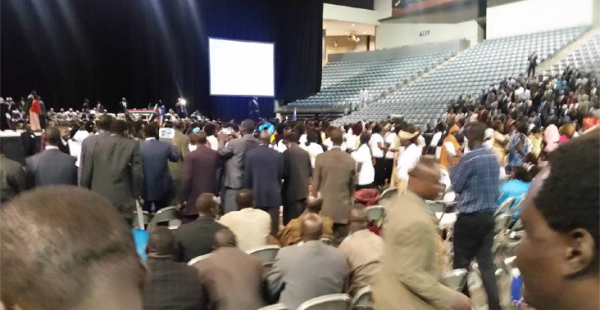 Oct 23, 2015(Nyamilepedia) — The First Vice- President designate who is also the Chairman and C-in-C of the SPLM/SPLA (IO), Dr. Riek Machar Teny, have concluded a very successful visit to the United States on October 15, 2015. He has come to the US on the invitation of the UN Secretary General Mr. Ban Ki-Moon, to attend a‘special summit on South Sudan’that took place on the 29th of September, 2015, at the UN Headquarters in New York, NY. This special summit was attended by the head of states and government of the world body. The Chairman of the SPLM/SPLA was received upon arrival to New York by thousands of his supporters from across the US, Canada, Europe and Australia. After addressing the UN special summit, he had held sideline meetings with the Norwegian Foreign Minister and the President of the UN Security Council.

Afterwards, Dr. Riek and his high level delegation team that comprised among other delegates, of the Deputy C-in-C of the SPLM/SPLA, Gen. Alfred Ladu Gore, SPLM/SPLA (IO) Chief Negotiator, Gen. Taban Deng Gai, Amb. Ezekiel Lol Gatkuoth, Hon. Tijwok Aguet, Hon. Hussein Mar and Hon. Dr. Dhieu Mathok, took the liberty while in the US to tour a number of US states to brief and mobilize all the South Sudanese American communities on the IGAD-Plus mediated Compromise Peace Agreement on South Sudan that kicked off with a series of public briefings in New York City and New Jersey, Washington Metropolitan area, Portland-Maine, Omaha-Nebraska, Kansas City-Missouri, San Diego-California, Salt Lake City-Utah and concluded in Minneapolis-Minnesota. In all these public meetings, Dr. Riek had consistently preached a message of peace and reconciliation and persistently called on the South Sudanese Diaspora communities to rally themselves behind the peace agreement and to support its implementation. He had also exhorted all the South Sudanese Diaspora communities to use their cyber-skills to become ‘warriors of peace’ in support of the peace agreement as well as rebuilding of the country.

While in Washington DC, he held a meeting with the US secretary of state John Kerry, and held so many important meetings with members of the congress from both the democratic and republican parties. He had also addressed some of the Washington based Think Tank institutions such as the Atlantic Council, USIP, and held meetings with the NDI and the IMF. The Chairman of the SPLM/SPLA (IO) also had a significant engagement with the media houses in Washington DC, such as the Washington Post, VOA, Bloomberg and Foreign Policy Africa 24, among others. The chairman of the SPLM/SPLA had highlighted all the dignitaries that he had met; with the political, security and resource challenges during the Pre-Transitional Period, and appealed for help in this regards so that the pre-transitional arrangements could be tackled in order to pave the way for the actual implementation of the peace agreement during the transitional period of the implementation of the Compromise Peace Agreement. The challenges he had touched on were as follows:

All in all, the visit of the Chairman and his delegation to the US was very successful. The leadership of the movement would now focus on addressing these challenges so as to implement the peace agreement in order to bring a lasting peace and normalcy to our nascent state.

← The Day SPLM Dies is the ‘DAY’ our Country Will be Peaceful.
Chollo Community in Arab Republic of Egypt Denounce President Kiir Order of 28 States. →