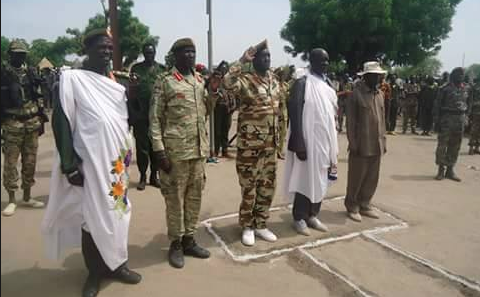 Dec 20, 2015(Nyamilepedia) —The decision that was taken by Bieh state governor Honorable Koang Gatkuoth kerjiok was not personal decision to remove the commissioner in his office , I’m sure it was discussed by state authority and also  based on how the government is working to assign you and remove you in the position as the constitution stated.

State government has sat and discussed before H.E. governor took a decision to remove honorable Duop Chuol in his post. No personal problem between commissioner and the governor that can make such an order to be implemented by  the governor . It is a government policy to remove and appoint a person.

I urges all supporters to remain calm, state government knowa what it doing, and it is going to assign Mr. Duop and Tut Chot Rial of Akobo .

I don’t see any room that may let enemies to come through as mentioned by our brother Marum Ruon by saying  that the decision made by state government can allow enemy to enter into our rooms so it is too confused to the public and it may complicated the situation in the movement.

Many people in the movement are seriously working harder to defeat enemy and teach south sudanese people with democracy and transparency as that is the vision and mission of SPLM IO to eradicate the public instead of dictating them .

To me mr Duop Chuol was not the best person thinking about about the defeat of rotten regime in juba so that no way for him to remain as a commissiner while authority take a decision to replace him and reappoint him in others position . It was stated by Late Dr John Garang  that SPLM / SPLA has many rooms to will accommodate any one.

Let us not complicate the situation in the movement by opposing the decision made by state government or the leadership in general , everyone  have right to rule in any position in governement and there is  a chance for the government to remove him .
If you were silent by  the government is the same  government to reappointed you in other posts .

Nyirol county is the silent community since before outbreak of war in our country let remain calms and committed to defeat who ever against us or Nuer at large in and around the country . It is our right to fight with government which kills our true Nuer children and women in juba as ethnic cleansing in juba under leadership of Salva Kiir and jieng council of elders who driving president to order gelweng and mathaing anyoor militia to make house to house search looking for Nuer in hiden place they are for their safety.

The article written by Gatluak Luk Choak and can be reached with Gatluakluk@gmail.com

← “Why now”? Nyirol County Commissioner Deserves to Wait.
Remembrance of Reath Thoan and His Fellow Innocent Nuer of Juba’s Genocide →

Recent Attacks on civilians in Lou-nuer blame on Murle gunmen