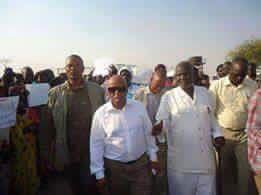 Acknowledging the fact that the recently signed IGAD sponsored Comprehensive Peace Agreement has excluded some factions of the South Sudan Armed Opposition,

Committed to achieving a comprehensive and enduring peace and stability in the Republic of South Sudan,

Aware that any exclusion of any factions of the South Sudan Armed Opposition will not bring about a complete and total peace to the country,

Further acknowledging the need for an inclusive peace agreement so that all the people of South Sudan can own it,

Accepting the immediate need to bring an end to the tragic conflict that has claimed the precious lives of our innocent citizens and displaced thousands others since December 2013,

Convinced that the final responsibility for bringing peace and stability rests on the shoulders of the people of South Sudan and their leaders,

Appreciating President Salva Kiir personal concern about bringing on board all factions of the South Sudan Armed Opposition including the FDP/SSAF.

Further re-affirming the commitment of both FDP/SSAF and GRSS to peace, national reconciliation, healing and accountability,

Unreservedly committed to the terms of this agreement; hereinafter referred to as the agreement and hereby agree as follows;

For the FDP/SSAF to join the Comprehensive Peace Agreement and to participate effectively in the Transitional Government Institutions at the national and state levels, it is proposed that the two principal parties to the conflict, GRSS and SPLM-IO, contribute certain percentages of their shares in the power sharing arrangements to FDP/SSAF. The following table shows how this arrangement can be implemented:

In case option one above does work option two shall be implemented as follows:

Civil Service is one of the most important national institutions that should reflect our diversity without compromising its neutrality and efficiency. Our general policy should be that recruitment to the service must be in line with the principle of Meritocracy. However, it is recommended that disadvantaged groups such as minorities, women and disable persons be employed under the policy of ‘Affirmative Action”. It is also recommended that the Civil Service Commission develops transparent, fair and equitable policies of recruitment and employment to ensure that every South Sudanese is accorded the opportunities they deserve.

The following positions should be allocated to the FDP/SSAF:

During the reforms process of the security sector institutions the following demands shall be allocated for FDP/SSAF.

The GRSS in partnership with the UN and NGOS shall repatriate South Sudanese refugees from the neighboring countries. They shall be resettled and given the assistance they need in term of food, shelter and clean water until they are able to stand on their own.

FDP/SSAF shall be represented in the following institutions:

During the democratic transformation in the transitional period the following freedoms shall be allowed:

The FDP/SSAF shall be represented in the following Transitional Military arrangements by the numbers indicated:

Joint Military and other Security Units in Juba

The FDP shall contribute with the following numbers to the above units:

All roads leading in and out of Juba shall be manned by a combined force of FDP/SSAF and GRSS.

FDP/SSAF Reservations on the 28 states- based Federal system

Truth, Reconciliation and Healing and (CTRH)

Traditional chiefs, community elders, Church leaders and African Religious leaders shall be members of the Truth, Reconciliation and Healing Commission.

← Who Is Who Singer Master Blaster Shot Dead At Eden Park Bwaise In Kampala
South Sudan will not be liberated under Dr. Marcher’s laissez-faire leadership style →

1 comment for “SSAF/FDP Presents New Peace Proposal To IGAD, Setting New Power Sharing Ratios to The Parties To The Conflict, Awarding Itself with The Lion’s share”