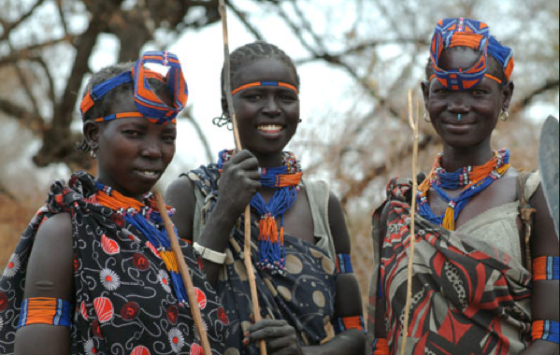 Murle Girls -The Murle are a relatively new ethnic group in Sudan, having immigrated into the region from Ethiopia. The language they speak is from the Surmic language family – languages spoken primarily in southwest Ethiopia.(Photo: Triming Down Memory Lane)

Feb 14, 2016(Nyamilepedia) —- Hello everybody, first and formost I wish to pass my gratitude and warmly greetings to our comrades in SPLM-IO online and all social media outlets.

Briefly I would like to inform the general public that’s there were rumors spread by Kiir’s imposition self-governor of a Buma state, a traitor known as Baba Medan, that he has persuaded us Murle sons and daughters in IO to abandoned people movement and join his dictatorship government.

Nevertheless, he gave a propaganda report to his father, Salva Kiir, that’s we have already joined them. This is not true as he barbarically manufactured and circulated it’s.

Our being in IO was not an easy decision to be demolished by somebody like Baba Medan’s. The presence of our forces in Pibor and Lekuangole counties is a paramount step to establish IO military bases in Pibor like any other states in the country where IO forces are cordially established.

Therefore, as a strong opposition to this dictatorship government, we are fully adhered to our movement no matter what other strange challenges might be on our civilians side of Murle and Nuer.

We would like to clarify that we understand the feuds between our civil populations among the Nuer and the Murle but also this has been their normal way of riading each other as normad communities. Again we are not saying that we will do nothing about it but it must not be politicized for greedy gains. The feuds between the Nuer and Murle cattle raiders has nothing to do with IO struggles for peace and stability of the country and hardliners must not exaggerate it to tarnish the image of our movement.

← Youth Action Development Network is Changed to International Youth for Africa
Prospects and the Reality of Peace to South Sudanese! →

1 comment for “SPLA-COBRA: WE ARE TRULY SPLA/M-IO AND NO SWITCHING ALLEGIANCE TO ANY PARTY.”