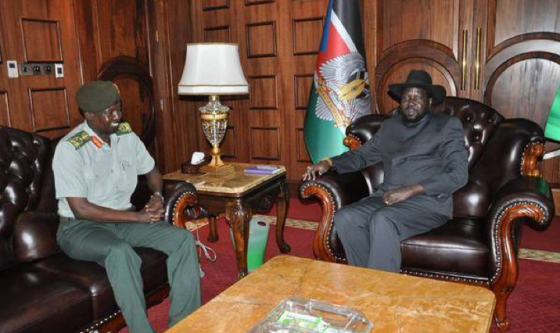 Speaking to members of Equatoria community and the office of the Deputy Chief of Staff for Training, Lt. Gen. Thomase Cirilo Swaka, the “whole community” is mobilized behind Gen. Cirilo who is currently battling members of Salva Kiir government to save his piece of land.

“the whole community is mobilized with arrows, machetes, sticks and stones to defend the land at all cost. The situation is very tense.” Said a political activist, Santo Wani Jumi, who speaks on behalf of Equatorian community.

“The gradual policy of land grabbing in Central Equatoria has reached its peak.” He said.

The new controversy began last week when a group of “government officials and relatives of president Salva Kiir” declared that all the families on the eastern bank of the Nile in Juba, including Juba University and its surrounding, must vacate their premises without further delay.

Among the victims of this unofficial new government policy is the Deputy Chief of Staff, Lt. Gen. Thomas Cirilo, who owns a piece of land on the eastern Bank of the Nile.

“The land grabbers who are armed to teeth have displaced the villagers. The unthinkable action happened when the land grabbers requested the second in command of the SPLA Lt. Gen. Thomas Cirilo to vacate his own premises or face the consequences.” Said an official from Equatorian community, who spoke on condition of anonymity due to sensitivity of the matter.

According to the insiders, when notified, Gen. Cirilo, did not take the request any slightly, and to many Equatorians, who have been dislodged from their properties, this has to be addressed once and for all.

Cirilo, a highly disciplined, patriotic and well trained military officer, however, refused to be driven by emotion and decided not to confront the “criminal land grabbers”, instead he called for a meeting with his colleagues in the SPLA command and informed them about the unfolding situation in his village.

In the meeting, Gen. Thomas Cirilo said he can’t tolerate the situation anymore since the grabbers have no respect to him as a very senior official in the SPLA.

“If there’s no government to intervene and stops the grabbers, than I will take law into my own hands, meaning I will fight the land grabbers, I better die defending my land instead of being alive with no land and dignity. If I die defending my village I will find a resting place where I can be buried if no land I will be eaten by vultures.” Cirilo speaking on Wednesday at the army headquarters, Bilpham.

His colleagues in the SPLA command were choked to hear that from the caliber of Gen. Thomas Cirilo and to some, he was just overreacting.

His colleagues, who are mostly juniors in command, said the Chief of Staff Gen. Paul Malong wasn’t in Juba, therefore, the best option was to wait for him, which literally translate as “kockoch” in Dinka.

When Malong returned and received the new development, he immediately called Gen. Thomas Cirilo for a meeting on Saturday.

Gen. Paul Malong said he fully agree with Thomas and said the government must take action to stop this illegal land grabbers from causing the destruction but Malong couldn’t hide his support for the relatives of the President and said he doesn’t agree with Gen. Thomas Cirilo on one thing and that is to declare war saying he “better die with dignity instead of living without dignity”.

Gen. Malong begs Cirilo that if he fight the government now over this land claims, “than there will be no country call South Sudan anymore”, however, Gen. Cirilo said he will never withdraw his words and he is determined to fight if the government has no intention or ability to stop and protect their properties and land from the illegal land grabbers.

“the community will be left with no option but act in self defense and protect the land.” Cirilo said.

After Gen. Paul Malong failed to convince Cirilo at 11AM, a second meeting with President Salva Kiir and SPLA generals was arranged to follow at J1 on the same Saturday, last week. Among the attendants were Gen. Marial Chunweng, Marial Nuor, Gen. Saed Abdullatiff and others.

Reacting among the general, who were mostly from the Dinka tribe, Gen. Thomas Cirilo said he never thought that the liberation struggle of South Sudan would end up with leaders humiliating each other.

“how can a group of individuals gradually grabbed land of communities while the government is watching? Mr. President just imagine your own government is being defeated by land grabbers, how would you feel? The land of Juba University and other government institutions like Juba Radio is taken and distributed by these “officials”. Mr. President even a dog if you kick him everyday, at some point the dog will react. I reached that point, enough is enough, this land grabbers occupied the whole village, finally without shame and respect they asked me also to vacate my own house for them, unbelievable, where should I go? Mr. President I’m here to inform you if there’s no government to protect me and my land as a citizen, I will fight to protect my land from being grabbed.” Said the overwhelmed Gen. Thomas Cirilo.

At the silence of majority, president Salva Kiir promised that the government will intervene and bring the situation under control and said “those involved in the illegal land grabbing must face the full force of law”.

At the time of this writing, after a long conversation with the generals, the situation remain very tense as many Equatorians, who are angered by land grabbing, cattle raiding and other inter-communal issues are calling for a final solution, “a war of rights and dignity” if the government fails to intervene.

Since the establishment of Juba as the capital of South Sudan, a big number of people including military generals and politicians have been killed or forcefully displaced from a piece of land they claim. Most, if not all the victims, have not been compensated as the new country lacks proper land policy.

← Breaking News: Gen Gathoth Gatkuoth Of SSAF/FDP Landed In Juba, MoU In Full Swing
The Leadership Of The SPLM/SPLA (In Opposition) Condemns In The Strongest Terms The Continued Offensive By Government Forces, Which Started On 08/03/2016 →