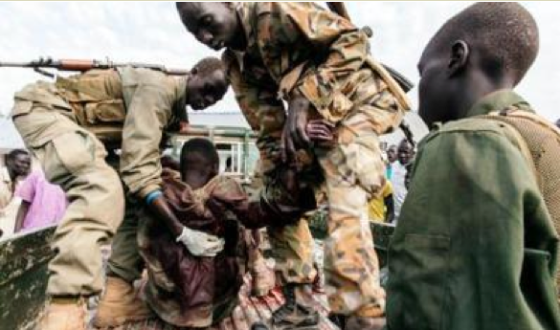 An SPLA soldier, shot in Malakal clusters earlier this year, dragged by his colleagues to safety.(Photo: past files)

July 7, 2016(Nyamilepedia) —— Clarifying on the situation, the Minister of Defense and Veteran Affairs, Hon. Kuol Manyang Juuk, confirmed that at least 10 officers were killed in last night shooting in Lou of Guduble residential areas.

Speaking in Juba this morning, Minister Kuol Manyang said a car traveling at night through Gudele started shooting at the soldiers on both sides of the road and killed five soldiers from SPLA [IG], 3 police officers and 2 members of national security.

“Soldiers who were in the car opened fire on both sides of the road, shooting to the left and to the right. And then while the car was moving, it resulted into killing of 5 SPLA soldiers, and military police 3, and then national security 2” Kuol said.

Although the details of what deployed mixed troops of SPLA-IG, Police and National Security in one area is yet to be determined, Kuol claims that the mixed troop was patrolling the areas because of incidents that happened there before.

Based on his explanation, Kuol believes that the car proceeded to Dr. Riek’s headquarters and once they were later contacted, they confirmed that the car arrived and one soldier was injured.

The minister claimed that a similar incident occured here three days ago and similar shooting ended with one police shot on Kiir’s side.