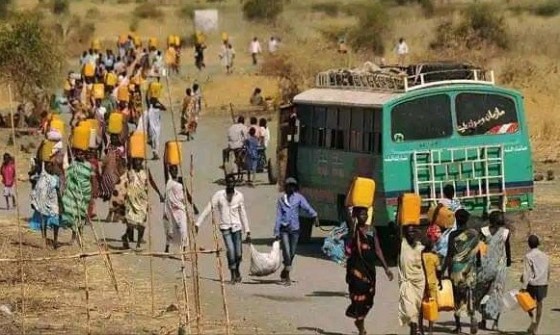 IDPs carrying water from outside as they walk toward the entrance of a UNMISS base in Malakal on February 6, 2014. PHOTO | AFP

“For the past 18 months, OCHA has been working closely with IOM DTM to thoroughly update South Sudan’s baseline data on IDPs,” said Steve O’Malley, Head of the South Sudan Office for OCHA.

“Now a new baseline has been set, and OCHA and IOM DTM will maintain a unified IDP baseline for South Sudan, which will be regularly updated.”

“The IOM DTM Mobility Tracking exercise published its first round of data in March 2018, at the time covering 230 locations across 23 counties”, says Jean-Philippe Chauzy, the IOM Chief of Mission. “Coverage has steadily expanded and the latest exercise, DTM Round 6, covers 2,312 locations across all 78 counties of South Sudan. The findings are due to be published in September 2019.”

The large-scale reduction of more than 360,000 individuals is caused by updating and verifying displacement data through revisiting locations and obtaining new population estimates, and reviewing all data for potential duplications.

The new baseline does not reflect the actual change in IDP numbers between July and August, but rather the cumulative effect of the data review. Considering all decreases and increases of IDPs throughout the country, there has been an overall net decrease of 26,302 individuals from July to August 2019.

“I am very pleased that we have been able to update the IDP data. The ability to understand the context and measure displacement is crucial to serving people who are impacted by the crisis,” said Alain Noudéhou, the Humanitarian Coordinator in South Sudan.