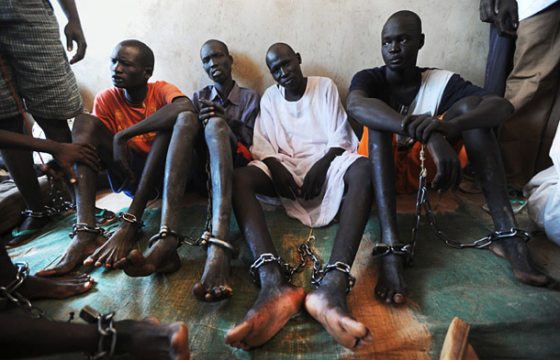 Inmates in South Sudan prisons lose weight very fast due to lack of food and poor facilities. Most die of starvation and illness while others are executed (Photo: supplied)

Dec 24, 2014(Nyamilepedia) –The Universal Intervention and Developmental Organization (UNIDO) urges the South Sudan government to release its employees, who were detained in Juba on Dec 12, 2014.

On Dec 12 2014 seven employees working for UNIDO were arrested after arriving in Juba and remain in security cells to date.

According to reliable sources, the employees were arrested on the basis that they are from Nuer ethnic group.

According to the preliminary notes, the process was expected to be a matter of short interrogation, however, latest reports confirm that the seven employees will be treated as war culprits.

“Juba said they should be treated as war captives because they come from Leer in Unity, an areas controlled by the fierce military Governor, Maj. Gen. Peter Gatdet Yaka” The insider elaborated.

Initially, South Sudan security arrested and charged the pilot for transporting “rebels”, however, the Kenyan pilot was released due to threats from Kenya after spending 10 days in jail.

Kenyan authority threatens to impose sanctions on South Sudan if the warring factions fail to honor their promises to restore peace in their country, a pressure that shaken the bilateral relations between South Sudan and Kenya.

The Organization calls upon South Sudan to release the employees and the vehicles with immediate effect.

Kitgwang Faction not interested in forming a political party or political structures,