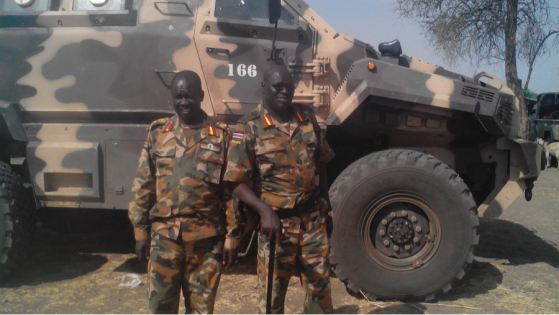 General John Mabieh Ghar, who made various victories under the overall command of Brig. General Joseph Gai Gatluak, was amongst the Generals who defected and Joint Dr Riek Machar’s rebellion after the Nuer Massacre in Juba.

“” I am assuring the world and the IGAD that Salva Kiir’s officers are not for peace as you have heard from Johnson’s speeches on SSTV, for that matter if they come and attack our defensive position in Fashoda, we will go and take the state capital Malakal not later than 9th march 2015’’’ said Brig. Gen. Mabieh.

General John Mabieh is the chief administrator and the deputy commander of the division seven to Brig. General Joseph Gai Gatluak. He joined the rebellion along with his colleague, Brig. Gen. Thomas Tut Riek, shortly after the outbreak of violence in Juba.

The two warring parties have been engaging themselves for the whole week in Shiluk kingdom over the Aloub and Kaka towns, which in retaliation were captured by the rebels as well as heavy machine guns, some shown above featuring the rebels Generals in Manyo County’s head quarters, Wedakona.

Regional and international communities have threatened targeted punitive measures if the warring parties fail to reach a final peace agreement per the schedule.

The war erupted on 15 December 2013 when political debates on reforms within the leadership of the ruling Sudan Peoples’ Liberation Movement (SPLM) turned violent between president Kiir and his former vice-president, Machar.

Tens of thousands have been killed; 2 million displaced internally and to the neighboring countries of Uganda, Kenya, Ethiopia and Sudan while over 3 million others are threatened by hunger and diseases internally, of which most of them are from Nuer tribe.

Interviewed by Maj.Weirial Puok Baluang, An Independent Journalist that corresponds for Nyamilepedia at the frontline!

Recent Attacks on civilians in Lou-nuer blame on Murle gunmen