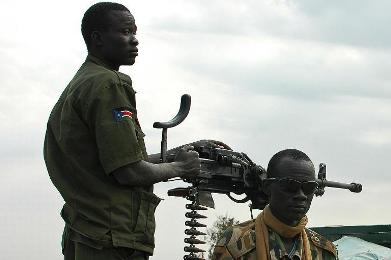 Soldiers from the South Sudan army (SPLA-IO) patrol the streets in the Upper Nile state capital, Malakal, in 2014 after dislodging government troops in the area (Photo: Charles Lomodong)

According to the military sources of SPLA in Opposition, government troops attacked their position at Kaka Payam in search of territorial gain.

The Opposition believes that their forces under Brig. Gen. Peter Lim Bol have repulsed the attack and captured, at least, 5 pick-up trucks mounted with various machine guns and 65 PKMs, a report that Nyamilepedia is yet to independently verified.

According to Dickson Gatluak Jock, who speaks on behave of the military commands of SPLA-IO, Juba has been massing troops in Wedakona, the administrative headquarters of Manyo which the SPLA-Juba captured in March this year, to attack their positions in the county.

Kaka Payam, which has exchanged hands many times, was recaptured last Month by combined forces of SPLA-IO and SPLA-Agwelek after the defection of Maj. Gen. Olony to the Opposition.

According to Dickson Gatluak, the Opposition will not give up on Kaka Payam and others areas, which they occupied after the government abandoned and relocated troops to Paloch oilfields.

Gatluak further reiterates that Juba is forcefully recruiting youth in Jonglei and Lake states to attack their positions in Lou-Nuer and Panyinjiar counties.

“For the past one week, high military presence were also seen being deployed in Bor the capital of jonglei state purposely to launch a coordination attack on Lou Nuer’s areas specially Akobo.” Gatluak said.

“Besides that, the government troop are also teaming up in Rumbek North Lake state aiming to attack our positions in Panyijiar Southern part of unity state.” he continued.

In other reports, the Sudanese President, Omar Hassan el Bashir, has officially left Johannesburg, South Africa, after news of his arrest sparked the media as ordered by the South African Court.

← Sorry UN, US, and EU Countries: The Expulsion of Toby Lanzer is Irreversible
Column: Hit The Nail On It Head, How to Identify Bad Friends’ Behaviors! →