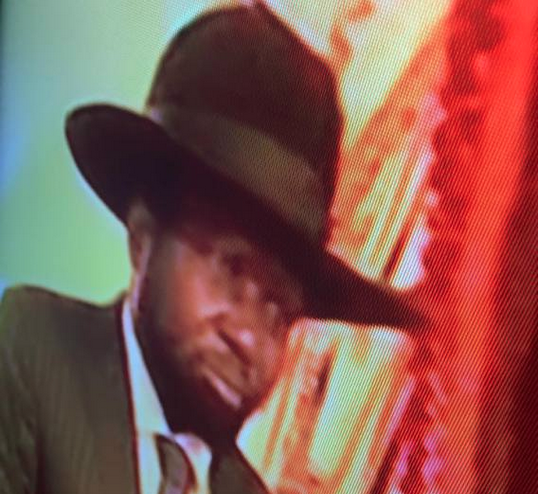 President Salva Kiir on SSTV after reports on his decorating health…

June 29, 2015(Nyamilepedia) — The so called President of South Sudan; Salva Kiir Mayardit (Dinka) he is recently suffering cirrhosis, renal disorder episodes and sexual transmitted diseases plus leadership challenge stress. The most obvious medical condition he (Salva Kiir) suffering is Hemiplegic which means the paralysis of his body’s right side, this condition is due to severe stress as the result of massacre of ethnic Nuers in Juba, his thinking of losing presidency leadership position and going to International Criminal Court (ICC).

The Hemiplegic condition will be developing until he (Salva Kiir) will be confined to bed. I don’t think he will continue leading the country on patient’s bed in hospital. The prognosis of his sickness has been described by his doctors as extremely very poor to remain alive. The so called Information Ministry Mr Makuei Lueth might also has contracted the same Hemiplegic condition.

The south Sudanese people divided into two groups; a group prefer Salva Kiir should remain alive to face ICC and other group said it wll be good his current sicknesses should kill him quickly for the real peace to be achieved immediately in South Sudan.

Preference for S Kiir to remain alive to face ICC

This group preferred that the President Salva Kiir should not die naturally. The reason is to appear in International Criminal Court (ICC), persecuted to life sentence in jail for the genocide he carried out on ethnic Nuer tribe of South Sudan. In remembering of every 15 December of year, massacre of Nuer ethnic group in Juba, Salva Kiir will be brought out every year from jail to re-explaining to south Sudanese people the December 15, 2013’s incident for how and why he (Salva Kiir) prepared the so called Guelwangs, Duotkubany or Mathiang Anyor until they carry out the massacre on 15 December, 2013 in Juba.

The jail of Salva Kiir and his group will be the one for those who becomes mentally ill as the result of current war he (Salva Kiir) created to people of South Sudan. That jail will be where somebody like Kuol Manyang (so called Defence Ministry) to find for himself a boyfriend because he promised to be a woman if rebels are not defeated. In that jail, it will be where they must experience forceful gay-life or homosexual relationship.

Recently, Dr John Garang de Mabior is calling the President Salva Kiir to go to him because he (Salva Kiir) and Musaveni are the most suspect over his death. The South Sudanese people he killed as the military intelligent officer in Sudan Army before he joined SPLM/A in 1983 and those he killed during SPLA are calling him too. The Nuers whom he massacred in 15 Dec, 2013 in Juba and those are dying in this current war (he Salva Kiir created it) from both warring parties are calling him and many other massacres such as Balanda Wau massacre, are calling Salva Kiir now to also experience death; because it’s said “Who kills a person with sword, also with sword will be killed”.

This group preferred that the rumours broken out last few weeks that he passes away should have been true that he (Salva Kiir) dead. The group extremely expecting that if Salva Kiir died! The Vice President Wani Igga will take over the leadership of the country and then the real peace will be achieved immediately and the normal life will return to South Sudan.

The author can be reached at dlual05@gmail.com

2 comments for “Prediction: The Expected End of President Salva Kiir!”