“South Sudan is the pot which everybody will, ( after he get tired) eventually come back and drink from it”  Elias Nyamlel Wakoson told the Al-Jazeera’s Inside Story program during the earliest hours of Thursday. 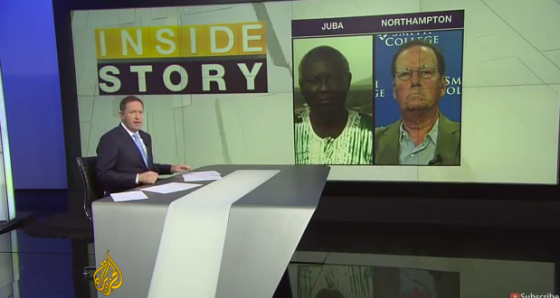 July 12, 2015 (Nyamilepedia) — Four days ago, I turned my eyes on the Qatari based Al-Jazeera English’s Inside Story program at 2:30 am, Cairo local time (the 9th of July) which officially coincides with the fourth South Sudan’s independence anniversary, coming across a very, if not disturbing , dark sided program titled, “South Sudan political or personal”. On the same time I was following a very interesting Egyptian comedy on the al Masr tv channel. At first, when I saw the title of the program, I did not had an interest to watch the program but as soon as the presenter welcomed his guests live from Juba and Northampton, I saw that the guests are Elias Nyamlel Wakoson and Eric Reeves, a monitoring and evaluation officer at the so called Ebony Center for Strategic Studies and a professor at Smith College respectively which drew a lot of attention from me forcing me to leave the comedy and shift to their program.

After Nyamlel was asked, he responded in a language full of bias and so, do the white guy. They both now are in possession of each one’s feeling and analysis towards South Sudan where it came to my sense that they are representing the views of the South Sudan defunct government which defines the rebels as the major factor in the violation of the ceasefire agreement prompting me to suggest that a rebel representative could have been invited to the program to express and represent the rebel camp as the case defines the role of the program.

What I usually know is that when a certain TV station hosts more than one guest, I am sure that the two may and in any case must have differing opinions. If they share the same view, then there is no need for the presenter to host the two or more. An example may be the Al-Jazeera Arabic Hitijah al-Muakth of Dr. Faisal Gassim.

To me the viewers of that program nor the presenter did not obtain from these guys a piece of opinion. But they further complicated and misrepresented the picture of what is happening in South Sudan as it is from the case of Nyamlel who said ‘’ Our people says, if two brother fight, they don’t have to break the water pot……because after they fight they are the same ones who will come back and drink from the same pot they refused to break” according to him, he means that there is no any kind of solution to the conflict in South Sudan and that Dr. Riek Machar and Salva Kiir will come back when they get tired and that we have to wait when they are tired and from my point of view, he is not only Jeopardizing the peace initiative under the auspices of the IGAD, but he is also ignoring the suffering and the pain inflicted upon the grassroots citizens by the current civil war. From Nyamlel and this gentleman, I do only see a language which lack from the beginning to the end transparency and balance. But in my understanding and analysis of Nyamlel’s words, he is trying to convice the environment in Juba so as to be conducive for his soul.

With the white guy, Eric Reeves, the two when further to talks in a way that do not reflect the mechanism of how the conflict in South Sudan could be ended. Eric Reeves, an American old man, afflicted with Riek-phobia reached even to the point that Peter Gatdet and Gabriel Tanginye are to be blamed for the days-out violation of the January 23rd ceasation of hostilities of 2014. Until the end of their interview, they did not touch the other side of the waring parties (government camp). I blame them two for their bias but less to Elias Nyamlel who by the time of the interview was in South Sudan’s capital Juba which for me means that he may be taking care of his life and thus make his words environmentally friend to the security in Juba which is the set of the slaughters and thus more blame to the white guy who is always know for his anti-rebels writings and commentaries. Gabriel Tanginye is just defending himself as well as Peter Gatdet.

Tor Madira Machier is a South Sudanese student living in Egypt, he is the author of an upcoming book: THE END OF THE BEGINNING: THE NUER AND THE DINKA, A REFLECTION OF SOUTH SUDAN’S CULTURE OF ETHNIC HATRED. He can be reached at: tormadira2013gmail.com

← South Sudanese Students’ Union in Uganda Loses its Focus and Direction!
Too Great Number of SPLM Leaders Are Fortune Hunters, Not Genuine Workmen And That is What is Pulling South Sudan Apart →