“if Sirir Gabriel Yiei Ruot and Zechariah Gatnog James are going to be the organizers of the RED-CARD rally on July 9th, then I will not attend the rally” one of my friends told me on the eve of 9th July. 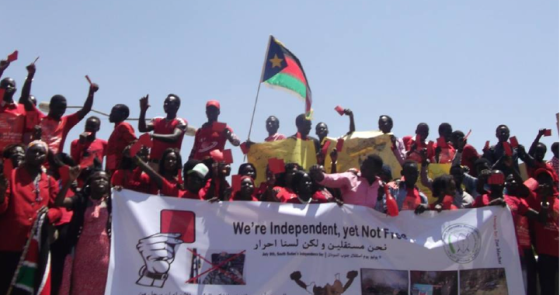 July 15, 2015(Nyamilepedia) — What a language of hatred! Is this a language of creativity, is this a language of progress or is it a language of love and tolerance? In Pagak, the General Headquarters of the SPLM/A-in-Opposition, the concept of SPLM is defined in a way that not even a single South Sudanese citizen may disagree. But here in Egypt, thoughts towards the visions and objectives of the SPLM-in-Opposition are different stories with each of the youth in Egypt defining the visions of the SPLM in his or her own terms which represents the dark side of the South Sudanese young men living in the Arab Republic of Egypt. They always define the SPLM internal politics in a way that misrepresents what is going on in Pagak.

To me writing this piece of article involves the following

Differences and personal hatred which occurred at the end of 2014 over the controversial dissolution of the then Nuer Youth and Student Association in Egypt severely affected the SPLM Youth League Chapter in Egypt.

Firstly, individuals among the Nuer youth in Egypt act like if the SPLM is a movement with the Nuer ethnic member of the Youth in Egypt posses the primary ownership. Appointment of non-ethnic Nuer in to top executive positions of the chapter created unstable relations between the Chairman, secretary and those abusing the visions and objectives of the SPLM. The fact that we incur tribal and ethnic hatred into political entity which belongs to every South Sudanese does not only tarnish the beautiful picture of the SPLM but simply proves to those who doubt us that democracy which we claim to be our main vision is an unrealistic prospect.

To me, no one with a sense of national feeling would find it easy to make his way in, to disregard the fruitful job done by Comrade Sirir Gabriel, and Zechariah Gatnog Machar both during their service during the days of Nuer youth and Students in the Arab republic of Egypt and during the commemoration of December 15th last year nor anyone would find it easy to sit idly not appreciating the great words spoken by comrade Bakyogo Emmanual Ginaba at the venue of December 15th prayers. To me, through the thinking of the two ( Sirir and Zechariah), we successfully commemorated the bloody December 15th and that their job of their minds helped us to remember our loved ones massacred by president Kiir in Juba. The appointment of comrade Bakyogo Emmanual Ginaba as the deputy chairman of the deputy youth league in Egypt is not only a democratic victory from the rest of the South Sudanese people, but it is also a sign of goodwill and the promotion of democratic principles by comrade Sirir Gabriel Yei Rut. Instead of criticizing the appointment, we would have been proud of such leadership that exists among the people of South Sudan.

Secondly; the needs for elections as a way of snatching power from the current leader grew in an unsustainable, nonconductive and difficult time. People keep talking about elections and elections of the top youth league position while the movement itself at home is in a state of resistance of a dictatorial regime and that important preparations are yet to be made in place between the movement and the Egyptian government. Let us first achieve stability there at home and calls for elections.

Tor Madira Machier is the head of the department of peace and reconciliation of the SPLM Youth League Chapter in Egypt and the author of an upcoming book: THE END OF THE BEGINNING, A REFLECTION OF SOUTH SUDAN’S CULTURE OF ETHNIC HATRED. He can be reached at: tormadira2013gmail.com.

Nyamilepdeia reserves the right to moderate, publish or delete a post without warning or consultation with the author(s). To publish your article, contact our editorial team at nyamilepedia@gmail.com.

1 comment for “Sirir Gabriel and Zechariah Gatnog Are Too South Sudanese: Controversies Over The Structure Of The SPLM-youth League Chapter in Egypt”