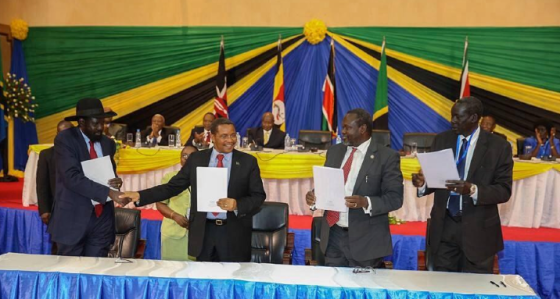 The SPLM leaders signing the Intra-Party Agreement to reunite the SPLM in Arusha, Tanzania(Photo: SPLM/Nyamilepedia)

July 18, 2015(Nyamilepedia) — There is skepticism that a consensus will be reached in Ethiopia if the anticipated round of peace talks under the auspices of the intergovernmental authority on development (IGAD) is successfully lunched, the government of President Salva Kiir is under severe pressure from both within and outside the country. Two things I have been aware of at the time will negatively affect the optimism that a peaceful solution of the current civil war could be reached:

One, Gen Matthew Pul Jang’s militias fear any kind of peace agreement that it may change the current environment that they are now the one in control of Unity and that they believe that, with the recent victories by their side in Southern Unity State and Panakuach, it will be the end of the rebellion luring president Salva Kiir into deep hole that military operation and offensives are the ultimate solution to the war. Nuer members of Salva Kiir’s cabinet are not in favor of peace agreement which if signed would drive them out of their ministerial positions because it is clear that if a deal is reached, president Kiir will kick them out of his cabinet to accommodate the newly appointed SPLM/A-in-Opposition cabinet members, and because of this fact, their advice to Kiir is that they will not accept any peace deal that is not friendly to them even if it means a new rebellion and to that extend, president Salva Kiir fear for the fate of his friendship with the Nuer members of his cabinet that they may turn against him after he already brought in the hostile rebels whom if any disagreement occurred among the cabinet may lash him out without or low political and military resistance from his side.

Two, the government of president Kiir is also as well under the same pressure from Yoweri Museveni of Uganda that relations between the SPLM/A-in-Opposition strained early and because of that Museveni fear the installment of Dr. Riek Machar to the government as democratic values and the needs for economic reform which in return affect Uganda both politically and economically will be worked out. So the military solution to the conflict is the first choice of Uganda’s Yoweri Museveni, and that is a very authentic fact as Musevni made it clear early that if an arm embargo is forced upon the government of South Sudan, Uganda will, on behalf of Juba, buy weapons and other military needs. The body language of Ugandan president Yoweri Museveni means, a military solution is the best option among others and that as long as Museveni still plays a dominant role in the region, peace is far from South Sudan.

Military mean is not the solution

To both the South Sudanese government and the Sudan People’s Liberation Movement in Opposition – SPLM/A-IO rebels, military solution is not the durable and obsolute solution to the current civil war. It may be, but incase peace talks in neighboring Ethiopia do not bear any fruitful results but at the same time, the military solution could not be expected even it means the intervention of allies from both sides.

Two things make president Kiir to be intransigent, one is the existence of Ugandan people’s defense force UPDF, and two is the help from his home allied militias. We have to learn from lessons of the pasts to judge the future. The existence of UPDF and the imports of modern machine weapons will never achieve any absolute military victory against the South Sudanese rebels under the former vice president Riek Machar. I think we all remember what was said by Yoweri Museveni that, “we give him (Machar) four days to surrender his guns, and if he fails to comply, we will all go to him and capture him” instead of the aforesaid four days, the struggle to apprehends Machar is now going on for almost two years despite the little ultimatum and this must be the lesson we have to learn so to answer the question whether military solution is what will end the war. The cost of the Uganda’s involvement in South Sudan is diverting Uganda’s public funds to this unapproved (by the Ugandan parliament) act of aggression and to this fact the needs for the withdrawal of the UPDF is growing at home to avoid further economic collapse.

Again, the latest victories by Matthew Pul jang’s militias and armed civilians in both Unity state’s southern counties and the main base of the South Sudanese rebels in Panakuach will not be expected by those in government as the end of South Sudan rebels. We have to put in minds that not all the allied militias are fighting heart in heart for President Salva Kiir. Let us look at the allied SSDM/A-COBRA Faction of the renegade David Yau yau who joined the government early last year, they put on hold their involvement to join hands with the government of Salva Kiir in fighting the rebels in Jonglei fronts. They don’t belief the government as their integration into the SPLA-Juba is not going through and many other things agreed upon during their deal with the government are yet to be made including the Pibor reconstruction fund. So they can break rank with the government any time.

The involvement of armed youth in the recent government offensives in Unity state has more to do with economic criteria and that cattle raiding motivated the youth and that they have already left Unity state. Their withdrawal from the government’s active military operations also weaken the military position of the government in Unity State and that the rebels could soon in the near future changes from defensive to offensive strategy.

Let us negotiate in good face so we ward off the suffering of our people.

Tor Madira Machier is the head of the department of peace and reconciliation of the SPLM-IO Youth League Chapter in Egypt and the author of an upcoming book: THE END OF THE BEGINNING, A REFLECTION OF SOUTH SUDAN’S CULTURE OF ETHNIC HATRED. He can be reached at: tormadira2013gmail.com.

← Twic East Community of South Sudan-USA Dissappointed With Sudan Tribune!
Confining Solutions of South Sudan Civil War to Power Sharing ratios and Re-unification of SPLM Is a Waste of Time and Resources →