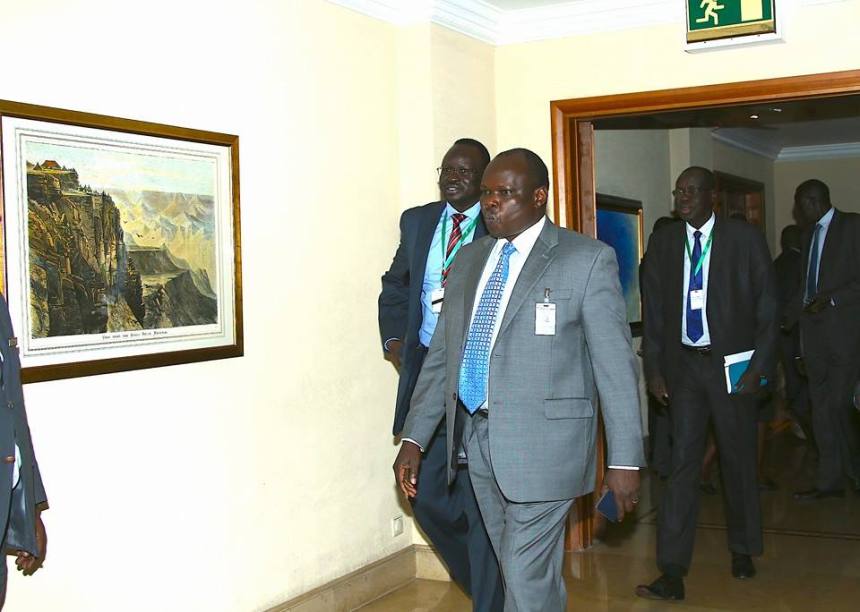 August 21, 2015(Nyamilepedia)— In a brief prologue on the subject of, desperate politician on a desperate journey who signed himself-in and lastly sign-out in a shortest time possible after two months of his returned to Juba.

The cogent of the distressed politician has come true after when he left for Juba in July and on 17th August 2015, he had also signed himself out again saying that mission is done no landing at Juba airport until Kiir Sign, Pagan made it undoubtedly with the intention of not go back to Juba unless Mr. President Kiir sign his unreserved section on the document as demanded by the IGAD mediating body and other stakeholders in the peace talks in Addis Ababa.

Cde: Pagan has signed out again; this is seen as a truly intolerant game he played whole heartedly without favor. Based on the recent psychoanalysis finding which indicated that, the secretary general of SPLM main stream and at the same time the braking dilemma of the broken up G-10 is at this time proven correct as an enormous man for changed as he stated earlier in Juba.

There is still a big question to be answer by Pagan; many South Sudanese are at a standstill asking unjustifiable questions on what Pagan promised when he was reporting to Juba in July given the fact that they the busted up G-10 will make sure they push the two warring parties for a peace deal to be sign in august. The residual issues are politically left unanswered to Mr. President of the republic of South Sudan and his immediate counterpart president indeed Mr. Museveni of Uganda who revealed his biased curiosity in the peace hall in Addis Ababa which caused him walked out of hall.

According to different views on the streets and on my own analysis, there is no confirmation on whether Mr. president Kiir will sign the document after the given 15 days neither may he go back to Addis nor to affirm no more negotiations for the peace deal. Others are also predicting an absolute devastation if Kiir dare fail to sign the text and this may unquestionably result to regional war for the reason that, friends in politics to other parties to South Sudan conflict will show their political and military supports directly regardless of Uganda’s intervention since the inception of the on-going war in South Sudan, (Juba Nuer Genocide in December 2013).

On the 17th of August; very unfortunate and miraculous things had happened in the hall while they were reaching the minutes of the deal. The initial story was that Sudan’s president and the president of the republic of Kenya had deeply threatened the mediator in shadow known-as his lordship and the right president in the region, (He Mr. Museveni of Uganda, who is at rest to be corroborate as a broker or an invader in the region). The second obsession was about Mr. president Salva Kiir who has failed to made personal decision on whether he could sign or not, he further went ahead asking Nhial Deng Nhial if he may perhaps sign the document or not, Nhial told him do not sign (he asked Nhial bai sign or bai puol, Nhial told him duk sign Bany in Dinka Language).

In a separate series Mama Rebecca Nyadeng De Mabior; who cried loudly in the hall and now in a relentless situation which may later on cause her heart attack in future for the reason that he utterly lost hope from the family of her late husband on other hand of tradition. He openly blamed Kiir of not signing the peace deal saying that this will be the end opportunity for us Dinka community to be value in the region since you failed to acknowledged the meaning of our suffering civil population in South Sudan because of power greediness.

Mama Rebecca had mentioned a very imperative point indeed that; her late husband tried his best in bringing all people together in South Sudan through struggles but Late. Dr. John Garang never made it to the expectation but at present Kiir killed the legacy of Dinka community internationally. Just in an analytical concept this is extremely confusing on whom to be reward and who to be isolating in Dinka record of the gloominess, big question on domestic politics.

The hardly throughout political worries in SPLM Juba, SPLM-IO Pagak and that of G-10 is the issue of Pagan who may later confuse the all situation if not mull-over in a serious war of politics. He deserved no silence in this cool war; he needs hard-war as pointed out by Michael Makuei Lueth after when he politically got frustrated in Addis Ababa, the infiltrators on both sides of the warring parties has failed to deep-rooted their individualist demands in the last minutes of the peace talks, this was confirmed as a game of no tolerant on the side of Dr. Machar who formally signed his part on the deal.

The ball is left with Mr. President Kiir; furthermore he had all the chances to kick it or to leave it but what will be the negative penalties if Kiir failed to sign again, I believe the Dinka Council of Elders the advisors in darkness must this time around warn their Son to choose the right direction otherwise things will upshot with no favor and its sweetness will be face by all.

Jieng or Dinka Council of Elders should also learn that there will be a series of sanctions to be impose on the leaders of the two warring parties, so I personal do not understand whether they will join their son in future, the president when he is going to face the outcome of the political sanctions by international communities and the region. I believe Dr. Machar has no traditional advisers and considering the facts that there is a government structure in Pagak where he appointed his constitutional advisers being governed by Pagak December Conference 2014 manifesto.

The big question on debate; does it mean Pagan Amum is more qualified than Michael Makuei Lueth to drive Juba government and his small group G-10?. Could it be a area under discussion that Juba government failed to control the internal administrative secrets because of Makuei’s loose-fitting talks as the minister of information and broadcasting. Like I mentioned it evidently in the past articles which I wrote about Pagan’s political tactic that he may later on ends up with accomplished mission in South Sudan and return back to his group G-10 in Nairobi.

Your Excellency Pagan Amum, the SPLM-Secretary General; before I turn-off my machine, I would like to take this exact opportunity to congratulates you for the job well done this time, we all know you for your political no stand, but the recent document you had just signed in Addis Ababa has also gave some South Sudanese a immense courage once more. May your soul and his rest aside the grave if this peace deal fails in future, they will not black-mail you but they will continue talking of your messes in politics and leave no legacy.

The author can be reached at delonymajak@gmail.com