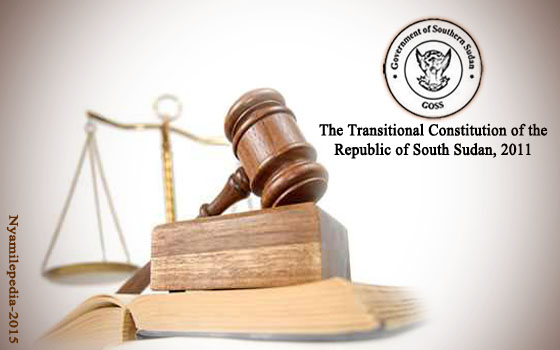 Sept 12, 2015(Nyamilepedia) — The controversial story of political development in South Sudan has emanated from lack of free democratic processes and indeed it has something to do with constitution term limits, the notion which becomes practices and norms in which some African countries fall in the same trap. With help of technology which brings the world nearer and close to each other I thought that such paradox could have been avoided.

This extravert practices becomes adaptive norms of acquiring wealth and robbing the future resources of the country which endanger and put the nation at stake. There are false theories and wrong believe claimed by ruling politicians that if they leave power the country will disintegrate, which distorts the bases of transformation and reforms.

Following the international politics and how the people are governed I become to realize that it is not person who rules that matters, it is only the rule of laws that matters. Contemplating US President Barrack Obama two quotations to African leaders that “Nobody Should Be President for Life,’’ and “Africa doesn’t need strongmen but it needs strong institutions.” One wonders how the Africa leaders perceived such quotations in their own minds.

The powerful nations like US have term limits because law is the law, and no person is above the law, not even the president.” Barrack Obama stated, with the same notion African countries could follow that examples put forth by developed countries.

The presidential term limits, shows the maturity and fairness in implementing the political ideals in the principled, well structured government set-up purposely meant to serve people in which all parties are allowed to compete in the free democratic atmosphere exercise where citizens are the one determining who will be governing them.

Term limits provide an important balance on the concentration of power; they strengthen democracy and ensure long-term stability. Eliminating or unduly extending term limits engenders corruption, which is the main cause of public distrust and significant obstacle to economic development.

Where there is freedom and rule of laws term limits, transitions take place as a natural course of events in the democratic system. Ruling parties are able to cultivate new leadership which can carry on the successful policies of their former leaders, but also correct for the past missteps, term limits offer a periodic guarantee of personal change and thus enhance the possibility of change of party in government.

The term often used by African politicians is that the future is for young generations while behind doors they are working hard in amending the constitutions renewing/extending their terms when their tenures come to an end. Such behavior is unbecoming because it deprived the youth sharing in the national cake.

In my humble opinion I suggested that South Sudan must adopt the term limits in its permanent constitution to avoid falling in the same trap where some African countries have fallen into.

The Author is concerned South Sudanese citizen and Political commentator, reachable at malekcook75@gmail.com

← Unity State Citizens shall linger united under the leadership of Governor Rt. Hon: Ruach Kuol.
The Unique Type of Ruling That Led To Genocide in South Sudan →