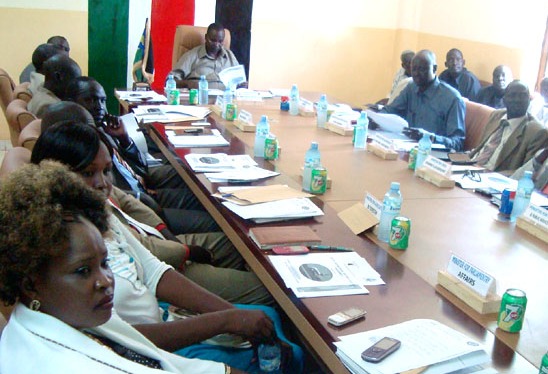 Sept 19, 2014(Nyamilepedia) — Who challenged Hon. Lt.Gen. Taban Deng Gai, the former Governor of Unity State and the current Chief Negotiator for the SPLM/SPLA in Opposition in the peace talks which were mediated by the IGAD-Plus in Addis Ababa?

David Lony Majak talks on behave of Leek community of Robokna County. In his article, which was published on Nyamile news website, Mr. Majak is not clear up to this time whether he is with us in SPLM/SPLA in opposition or on the government’s side.

According to David Lony Majak, his article that threatens the leadership of the movement under Dr.Riek Machar Teny, about the unity state governorship candidates, claiming that Gen.Taban has interests to bring Cde.Thomas Jal Thomas ,Cde.Michael Chiengjiek and Diu Charow and leave out Cde.Robert Ruai kuol as the best candidate for governorship of Unity State.

Majak called the three comrades as Taban group and have interests in bringing up one person from among themselves as the governor, however,the same case scenario has happened in the Facebook media, some of my colleagues posting articles, which are not good for us, the intellectuals. Being intellectual and educated person you have to think and analyze things before taking action.

I condemn and reject those claims registered by Mr. David Lony Majak and other writers because they don’t appreciate the important role that is being played by Cde.Gen. Taban Deng in our movement. I can say Gen.Taban worked very hard indeed in the way how the peace in South Sudan must be achieved.

For your information Mr. David Lony Majak and those elements who are talking about Hon. lt.Gen.Taban Deng, please Hon. Ruai Kuol Jal was a Commissioner of Robkona county for five and half years during the time of Gen.Taban as Governor of unity state. Therefore, the four Comrades have been in one camp in the past, and right now they are still in SPLM/SPLA in Opposition in which any one of them have right to be a governor of unity state during this transitional period, if our leadership decide to bring one of them. I think there is no any problem with them. They are sons of unity state.

Our interest is that, we the people of unity state we want somebody who can unite our citizens and make reconciliation among them not to make revenge and that person will be fully able to stand behind the leadership of Dr.Riek Machar, and will work hand in hand with all the communities members in the state and others South Sudanese as a whole to ensure the sustainable peace in the country.

I call upon all the following counties Leer ,Mayiendit ,Panyijiar ,Koch, Guit ,Robkona and Mayom to ignore the baseless speech made by David Lony Majak in a strong possible term as a false allegation for his challenges to Cde. Taban, which he made on behave of Leek community in the SPLM/SPLA Opposition under H.E Dr.Riek Machar Teny.

Am urging all the Nuer community and other South Sudanese who are now suffering in neighboring countries and inside South Sudan UNMISS Camps not to listen and not to support those lies made by the spoilers of this compromise peace agreement in the media. I can call them like enemies of peace in South Sudan.

I appeal to all intellectuals in Unity State that we can live this language of jealousy, hatred and discrimination among ourselves and used wise consultations very carefully not in the way of threatening others like what Majak did. This time around our communities in state will not stand by those of Lony Majak since his move is clearly made to divid our communities and it is influenceD by the failed government in juba that killed thousands of Nuer in cold blood and looted their properties.

I would like to acknowledge the vital role and the responsibility taken by the leadership of H.E Dr.Riek Machar to bring good son of Unity as a Governor who will be able to manage all the serious challenges and confusion made by those elements, and believe that he/she will be free from the following diseases: Nepotism ,tribalism and relatives.

Therefore, I would like to remind all the Nuer communities and others South Sudanese communities that enough is enough, this is the time for us to give peace a chance in our hearts and we must work together with the would be designated governors and transitional government of national unity for the full implementation of compromise peace agreement which was signed by both leaders.

The writer should be reach through this email nhialkoch@yahoo.co.uk

← Strategic For National Unity and Amalgamation in South Sudan
Response To Mr. Nhial Koch Ral, In Rejoinder To My Previous Article on Unity State Transitional Governorship →