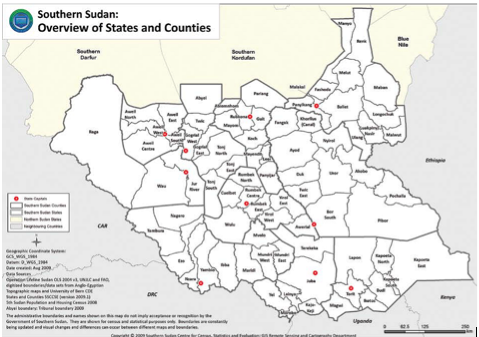 October 10, 2015(Nyamilepedia) —- once again, a set of decrees setting ambitious policies with targets requiring tribal isolations being attached to the adaptation of the established 28 states is unrealistic and unconstitutional. Respectively, has become obsolete and unrealistic considering the activities of the establishment of 28 states in the Republic of South Sudan.

Notwithstanding doubts; the president Kiir has in his out-dated presidential decree alienated (10) states into 28 states traditionally without acknowledging the modern geographical boundaries and demographic importance. Maps are always valued as natural features of the land in history and in the world geography when it comes to borders’ demarcations from the time of colonialism. The logic behind all these is traditionally believed to be of tribal satisfaction beneath the leadership of Salva Kiir.

By doing so; the survived president with unconstitutional extended life-span lacks constitutional powers to continuously issue more decrees in his own capacity. He should therein take into contemplation the fact that, there is just a signed Compromised Peace Agreement (CPA-2, 26 August of Juba and 17th August 2015 of Addis Ababa).

President Kiir deviated from usual geographical borderlines of British and Sudan the then; creating no pedestal 28 states, he should either defer or rebook the presidential order No. 36/02/Oct/2015. Originally South Sudan was divided into 10 states. They were created out of the three historic former provinces (and contemporary regions) of Bahr el Ghazal (northwest), Equatoria (southern), and Greater Upper Nile (northeast). The states are further divided into 86 counties subject to National Legislative Assembly NSA representation in parliament from 2005-2015.

International community’s position over the unworkable presidential order is tremendously apparent that, no one is above the law internationally. The following stakeholders involved in South Sudan’s conflict have in advance disowned the so called presidential decree establishing unconstitutional 28 states in strongest words possible, Troika participants and the regional bloc IGAD-Plus.

There are no supreme laws that mandated the president to ascertain 28 states without consultations and beside that; the interim constitution of the republic of South Sudan has expired since there was no an amendment made.

In accordance to the new principles of the agreement, there are no extra powers put aside for president Kiir to act in his own aptitude without high regard to the agreement. The neither here nor there presidential decree shall not be effectual since it was not element of the peace deal. Juba Government should come out undoubtedly if they do not want peace to bear its fruits in South Sudan.

Not everyone agrees; to Dr. Machar’s proposal of 21 states but there was an international geographical and demographics alarmed in reviewing the British Colonialism Borderlines on January 2014, (BCB) of 1905 and 1956 of 1 January of Sudan’s independence. South Sudan seceded from the Republic of Sudan in 2011 when South Sudan Citizens voted for separation, (Implementing the objectives of self-determination through Dr. Riak Machar’s initiative of 1990s).

The top leadership of SPLM-IO did not in its inception imposed the establishment of 21 states to the people of South Sudan, it was a proposal left to the people of South Sudan to decide over in future after the period of Transitional Government of National Unity, (TGNU 2015-2018). This is not satisfactory; there is need for popular consultations to be done whether through parliamentary procedures or referendum voting if South Sudanese had the reasons to benefit from decentralized governance system.

Physically, South Sudan is not part of the Sudan region at all (the Sahel), forming as it does part of Sub-Saharan African in history. This helps South Sudanese in mountaineering their defensive borders which left the outstanding contesting Border issue of Abyei-2008 and Heglig-2012 after Comprehensive Peace Agreement in 2005, referring this to 1905/1945-50s. The issue of territory of present-days South Sudan and the people inhabiting the regions is exceedingly fundamental; this may possibly be applied by the president in his recent unfortunate presidential diktat.

In harmonization of the topical peace agreement; the president lacks autonomous powers to exercise not in-line with the constituted guiding principles read-out in some provisions of the CPA-2 and, he must works in consultations with the leader of Sudan People Liberation Movement, in opposition (SPLM-IO). President Kiir be supposed to in his delicate capacity compliment the peace agreement to recognize the efforts of the suffering civil populations in South Sudan and to gives peace its means for execution.

The Precincts and Borderline Demarcations (PBD) in creating new independent states with Counties or Districts; must be accord to the Comprehensive Peace Agreement (CPA-1) signed on January 9, 2005 which ended the 21 years of North-South longest war in Africa, provides for demarcation of the borderlines between the two regions during the interim period base on the 1956 border delineation.

The formation of more states is not an issue because it is supreme to the decentralization system, but there was no bureaucratic ground persuaded to the new presidential order. State of Tamil Nadu, in Southerner India was divided into 32 districts but there was enough consultations being carried out as well as geographical locations were measured in the formation of the 32 districts of Southerner India. After the Indian independence in August 1947, the former British Provinces of Madras Presidency were believed to be part of the districts expansion.

After having read the Article of Dr. James Okuk; I fell so uncomfortable of seeing great man with bright future dodging national responsibilities. Okuk has on Friday 2nd October 2015 in Juba responded to presidential decree No. 36 and went ahead quoting as usual Article of 101 of Transitional Constitution of South Sudan (2011). He said; President Salva Kiir issued ‘’Establishment Order Number 36/2015 for the creation of 28 states in the Decentralized Governance System (DGS) in the Republic of South Sudan’’.

He also attempted to dispute Dr. Machar in the same scenario of state affairs establishing more states; Quoting the exhausted idea of federalism is non than Dr. Machar’s ideology and that of self-determination which brought you out of the darkness and managed to acquired PhD from Nairobi University in year 2009. President Kiir has previously sabotaged the peace deal not to be signed as he was disregarding the democratic proposal of federalism that establishes 21 states.

In unfounded statement by Dr. James Okuk; by choosing unconstitutionally, president Kiir could be seen as equivalent to chief rebel Dr. Riak Machar who is not bound by any constitution or law in his decision. He should have learned that Dr. Machar did not stupidly acted out of the former colonial borders, (British Borderlines Demarcations) which were established prior to 1905, 45, 50 (s) before 1956 of Sudan independent.

Recalling the geographical and demography concern of the former colonialists borders; it provides the names of formally provinces and districts which were latter changed to states and counties of present-days at the time of Arabs Sudan-Egyptian colonization. I would have in person appreciated the PhD holder if he responded diplomatically to how the president miss-selected some counties, ethics identification, and tribal establishment of 28 states by the president.

The issue of Chollo-Shilluk community left unquestioned by Dr. James; the case of Fashoda state is also cut in half way by the eastern Nile state where there is no instantaneous borderline and central Malakal as well being annexed to Dinka people, Northerner BGS and a few other areas without borders. This may in later days cause continuous tribal frictions amongst the neighboring communities of Upper Nile, Dinka Padang and Chollo from Shillik Kingdom.

Based on the assumption posted forth by Juba regime; in no meaning, Kiir thoughts he will in person appoints the 22 governors and other 6 states to be appointed by SPLM-IO leader. This lacks international standard without explanation since it’s bound no legal procedures being employed initially. By the virtue of CPA-2, any additional creation of more states before the implementation of the peace deal is not possible till 2018 general elections.

In future, the whole nation shall be placed under a thoroughly review on human geography, demography studies which included; cultural, economic, migration and political studies, and the population density. ‘’This could be in stripe with national statistical census population records of 2008 subject to South Sudan National Bureau of Statistic-SS/NBS, Sudan section of the 5th Sudan Population and Housing Census in 2008’’.

Unity State-Bentiu, the establishment of 28 states should instead be considered as tribes’ isolation from their respective geographical locations. In the case of Unity State being divided into 3 states, it would have been divided into 2 states, Southerner area is comprised of 4 counties namely; Koch, Leer, Mayiendit and Payinjair County formally called Greater Leer during Arabs colonial era. Northerner area consists of 5 administrative areas namely; Rubkona, Guit, Mayom, Abeimnom and Panrieng with their HQs greater Mayom.

But since Mr. President kiir is targeting Dinkas areas with oil, he should have made it this way; Mayom, Abenomia and Pairang as separate state. Rubkona, Guit and Koch to be state and then Southerner state could be Leer, Mayendit and Payinjair County to make a state.

The division of Unity State must be question by Dr. Nguen Mongtuil the caretaker governor of and his deputy Mabek Luang; ever since they were the one engineering this creation of 28 states because they thought whatever idea initiated by Dr. Machar and the top leadership of people’s movement is for all time pessimistic.

There are no borders between Abiemnom and Panrieng County; Panrieng is bordering Mayom, Rubkona and Guit County, Mayom border with Abiemnom and Warrap state. Dr. Nguen and Mabek, the current deputy caretaker governor of unity state-Bentiu must question this unlawful move taken by their Boss unless otherwise.

In Upper Nile state there is unfair selection of some Counties, Dinka counties has been selected from their respective geographical territories then isolated from Nuer and Shilluk areas due to the issue of resources. However; the president gave central malakal to Dinkas then, cross shifting the original owners of the land to unknown geographical location without bearing in mind their ancestral border before the modern created maps of the world.

This is more than a land grabbing; there is no reason at all for Chollo/Shilluk Community to be humiliated in their own land although it gives obvious indication that there was a contesting land dispute on December, 30 2010 in Malakal between Chollo and Dinka communities of Upper Nile State.

Greater Equatoria people of present-days 3 states had never demanded creation of more states, but they were instead calling for federalism due to enduring human humiliations, arbitrary arrests, land grabbing in Juba city, corruption and lack of equity and inequality for all under the leadership of Salva Kiir. Having given them 8 states alone without resources is naught and meaningless Therefore, justice for all kinds must prevail ahead of gratifying them with vacant states which has no budget.

21 states were originally formed with intention that; there shall in future be a legislative procedures and legal actions to be taken for the endorsement of all issues pertaining federalism in the republic of south Sudan. Presidential decrees do not legally resolves all national proceedings which required popular rights and consultations unless it is a dictatorial ruling.

The author can be reached at delonymajak@gmail.com.