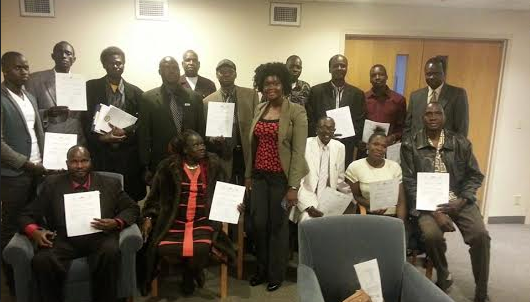 July 28, 2016(Nyamilepedia) —— The SPLM – In Opposition Youth League wing in Canada Denounced the conspiracy and an illegal removal of the Chairman and Commander in Chief of the SPLM/A-IO: DR. Riek Machar Teny.

We, the SPLM-IO Youth League Office in Canada, would like to state our stands, conviction and reaffirm our support for Dr. Riek Machar Teny, as the only recognized FVP of South Sudan and the Chairman and Commander in Chief of SPLM-IO. We denounced the conspiracy, an assassination attempt at J1, and the ongoing hostilities carried out against Dr. Riek Machar Teny by Cde. Taban Deng Gai & Salva Kiir with an approval of Jieng Council of Elders, a tribal council group whose aim and establishments is to Rule and Divide the country.

We support and stand firm with the decision made on Friday July 22, 2016, by the SPLM/A-IO Chairman Dr. Machar Teny for the removal and dismissal of Taban Deng Gai’s membership from the SPLM-IO thus Cde. Taban, is no longer an IO member and no longer fit nor qualified to hold an IO ministerial post nor any appointments with in the SPLM-IO political structure. Therefore, we, the active members and the entire leadership of the SPLM/A In Opposition, as per the directives given by our Chairman and Commander In Chief, the FVP, Dr. Riek Machar, no longer consider Taban Deng Gai, and company as IO loyalists, for they have abandonned the Movement and join SPLM-IG. As per August signed Peace Agreement (ARCISS), there is no provision on the Peace Agreement that authorizes or give President Kiir, any power to appoint anyone for the position of the FVP, even in the absence of the FVP. According to ARCISS, the provision only stated that the FVP is responsible for nominating someone within his party in his absence. SPLM/A In Opposition is a national Movement, therefore its fate cannot be decided overnight at the Hotel functions.

We the South Sudanese millennials in diaspora, specifically in Canada, under the leadership of Dr. Riek Machar, would like to appeal to all our Peace Partners: JMEC, IGAD, UN, Troika, USA, China and Africa Union to ensue and urgently deploy the proposed Regional Force as per the Resolution passed in Kigali, Rwanda. Having the third party deterrence force in Juba, is the only viable option in finding alternative solution in saving the formed TGoNU, and the Peace Agreement from collapsing.

We are calling upon the African leaders, peace brokers, and the regional body to engage in the process of normalizing the situation in South Sudan and reject the appointment of Taban Deng Gai, by President Salva Kiir as the FVP. Thousands of lives have been lost and death is still ongoing in South Sudan. It is up to the regional body, the African Leaders and the peace partners to stand by the SPLM/A-IO Chairman and the FVP, Dr. Machar Teny so that the Third Party forced reach to Juba and the decimation of the ARCISS would continue.

The SPLM-IO Youth League office in Canada, denounced the appointment of Taban Deng Gai to the post of the FVP, considering the fact that his appointment does not resonates with ARCISS. We are in full support of the implementation of the agreement and the only person to carry an implementation of the peace agreement forward is the Chairman and the commander in chief of SPLM/A-IO, the democratic leader, the only politician who refused to sit idle and stood up against the tyranny way of ruling, H.E, the FVP of South Sudan, Dr. Riek Machar Teny.