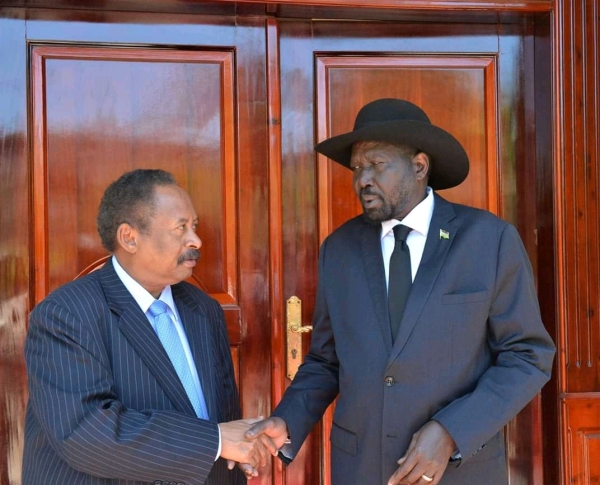 “We hope to have very prosperous relationship that will address issues of trade, border issue, oil, free movement of our people between the two countries and all these agendas,” said Sudan’s Prime Minister, Hamdok in the capital Juba.

Hamdok, the Sudanese Prime Minister, noted that he and South Sudan President Salva Kiir Mayardit were able to reach agreements on border issues with the aim of improving bilateral relations between the two neighboring countries.

“We discussed bilateral relations including border and trade and we reached useful understandings that will push the distinguished relations forwards,” said Hamdok in the capital Juba, in a press statement.

He said his country looks forward to forging cooperation agreements that would establish strong bilateral relations between Sudan and its neighboring South Sudan.

“We have been one country and now we are two countries but we are still one nation and we hope to develop our relations. We would like also to take the opportunity of the positive atmosphere between the two countries to further our cooperation and make sure that all the issues between our two countries will be solved,” he said.

Since the world’s youngest nation gained independence a few years ago, the two neighboring countries have been at loggerheads, trading accusations over harboring rebel groups in their respective countries.

← Troika lauds the Parties, reaffirms its full Support for the R-ARCSS.
Why SA Must Support Peace Deal In South Sudan- Opinion. →

Opinion: What Is Behind Jemma Nunu Kumba’s Political Luck?