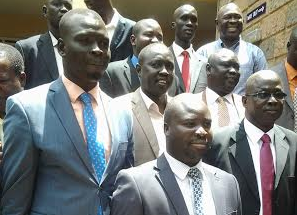 April 11, 2015(Nyamilepedia) — South Sudan’s SPLM/SPLA [in Opposition] calls on Museveni’s administration to respect the memorandum of understanding that the two parties signed on August 21st, 2014.

According Dr. Oyet Nathaniel Pierino, the Chairman of National Committee for Political Mobilization, SPLM/SPLA has been closely monitoring developments in relations to memorandum of understanding, named “Kampala Outcome”, however, to their disappointment the rebels’ faction has learned that Kampala disowns the agreement.

Dr. Oyet explains that the agreement, which is acknowledged by IGAD, Troika and African Union, was a landmark understanding aimed to bridge the gap between the two parties after the Ugandan Government illegally sent its troops to fight alongside Salva Kiir’s forces, however, Kampala has continued to disown the agreement.

“There are obviously certain unacceptable conducts that undermine the spirit of the cooperation agreement that we are not happy with particularly the continued military supports and reinforcements of the SPLA by the UPDF in different fronts in Upper Nile.”Dr. Oye explains.

“The recently concluded joint military exercise by Government of South Sudan’s forces and the UPDF was a serious cause of alarm and highly provocative and flagrant violations of the ”Kampala Outcome” which calls on the UPDF to play positive role in the peace process. This is tantamount to obstruction of peace in South Sudan in favor of military solution.” Oyet continued.

“These thugs are nesting in South Sudan’s embassy in Kampala and their satellite offices countrywide while enjoying close contacts and cooperation from elements of Uganda’s security and military establishment.” he added.

Oyet, the former head of political science department at Juba University, affirms that the opposition has obtained hard evidence that South Sudan embassy in Uganda has built a database, containing the names of IO officials and family members that are prime targets for hit and abduction in the neighboring landlocked country.

“Yes, we obtained classified evidence to the effect that Government of South Sudan through its embassy in Uganda has compiled long hit and abduction list which includes particulars top SPLM/SPLA officials and members of their family and has shared this with elements within Uganda’s military and security establishments and action may be imminent.” Oyet explains.

The opposition is also concerned of “unfortunate media hate speeches and incitements by officials from the government of South Sudan on state own media and press outlets in Uganda”.

Dr. Oyet explains that the media hate speech has traumatized the South Sudanese refugees in Uganda, leaving them in panic.

“Government of South Sudan’s officials through the embassy gives unequal treatment to South Sudanese and continues to polarize and divide the population along tribal and ethnic lines as part of the genocide policy.” Oyet explains.

The Opposition urges the government of Uganda not to be part of the fateful policy since relationship between Uganda and South Sudan is natural and extends beyond longevity of a regime.

SPLM/SPLA [IO] cautions the Ugandan media and government officials that any misrepresentation and misreporting of their grievances will derail thr little trust between the two parties.

“Security and intelligent misgivings and misreporting as well as judgments clouded by greed and power is to blame for the unprecedented collapse of trust between Ugandan and South Sudanese political forces both in the SPLM/SPLA and those currently within South Sudan.”

According to Dr. Oyet, SPLM/SPLA is committed to maintain peaceful coexistence and spirit of Pan Africanism with regards to integration, trade, commerce and prosperity of South Sudan, Uganda and the region.

← Greater Twic East and Greater Duk communities’ Urgent Response Press Release!
AK47 Gives a Right to Say Not Only a “No!” but a “Big No!” →