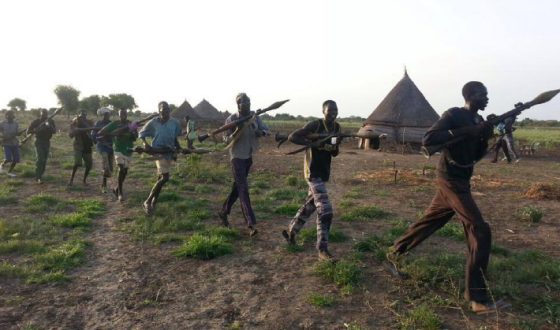 Light artillery-RPG-7 unit of SPLA-IO runs towards ther rival in Upper Nile state. The allied white army lack military training of using big guns but they are good at shooting and chasing the enemy(Photo: file)

May 20, 2015(Nyamilepedia) — Counting their losses and gains at a break at the newly established Tangrial oil refinery site, the combined oppositions led by Brig. Gen. Paromi Angui of SPLA-Agwelek and Brig. Gen. Simon Diang Duoth of SPLA-IO were shocked by the type of weapons they captured in a government warship along the River Nile in Tangrial.

According to the military spokesman of Chollo dominated Agwelek forces, Brig. Gen. Nyagwal Ajak Deng, the allied Oppositions seized a heavily loaded government gunboat at 10:30Am, 19 May, 2015.

“The SPLA gunboat came two days ago from Renk heavily loaded with combat machines and military tanks to help their forces in Meluth and Paloch” Brig. Gen. Nyagwal explains.

The gunboat, which was destined to reinforce the government troops, however, did not only contain the usual machines guns and military tanks but also a recently obtained “laser system missile”, which the rebels failed to identify.

The Agwelek forces conclude that the one unit heavy tech missile, which was mounted upfront, was aimed to destroyed their superior gunboats.

As he explains, the former government allied militia has defected the regime with some of the most superior weapons in the country including a Chinese-made ZBD 2000 amphibious light tank, which they have used for the past two weeks to transport their combined troops and weapons along the River Nile.

Although the Opposition are yet to establish their own loses, the spokesman confirmed that the government side lost more than 173 fighters in the warship as uncounted others drowned.

“173 dead bodies counted in gunboat and unknown number drown while struggling to get out” Gen. Nyagwal said.

Nyagwal believes that the remnants from the boat incident were seen fleeing towards Meluth, a town the rebels later captured at 7:00pm on Wednesday evening.

From the warship, the anti-government forces counted the following military equipments “all in excellent condition”

The source further revealed that the combined anti-government forces used 2 warships in Meluth to dislodge the combined governments’ troops in their strongholds in a match towards Paloch oil fields.

More reports on number of casualties and military gains from Meluth and its outskirts will be released tomorrow afternoon, according to Agwelek military spokesman.

While the Opposition announces their victories at a distance of less than 10 kilometres away from the main oil fields, Juba is organizing reinforcements to be air-dropped at Paloch after the rebels took Meluth and Akoka gatways.

In addition to defending the oil fields, SPLA [Juba] is organizing attacks to retake Malakal, the capital of Upper Nile, and the rebels strongholds in Greater Akobo of Jonglei State.

← WARNING TO EQUATORIANS
Embracement of Cultural Diversity, a Sum-up Solution to the Tribalism-ton South Sudan! →